How to let MAKEFILE retain the backslash sequences within a string when used in a make rule?

This is my first question on Stackoverflow so forgive me if I ask anything ridiculous :D.

Problem:
Suppose I want to compile a program that is in the directory "my dir/" with a space in it. Say the pathname of the program is "my dir/test.c".

Here is the sample makefile that I was trying out:

As you can see that in the last line(line-5) I have written the pathnames of the source and the output files directly as written in the prerequisite and the target, respectively. Doing this works fine because it yields the command:
gcc my\ dir/test.c -o my\ dir/test.out
which a syntactically correct way of passing filenames(with spaces) to gcc or any other shell command.

The second last line(line-4) is where the problem is(commented line). I've used automatic variables $@ (Target) and $< (First and the only Prerequisite) to produce the filename arguments for gcc which I expected to be
my\ dir/test.out and my\ dir/test.c, respectively. But here, for some reason, the produced filenames are my dir/test.out and my dir/test.c and hence the yielded command is:
gcc my dir/test.c -o my dir/test.out
Now here, gcc considers my and dir/test.c as different two different input filenames and the command generates errors.
Here is a screenshot of the generated error output when I uncomment line-4 and comment line-5 of the above Makefile: 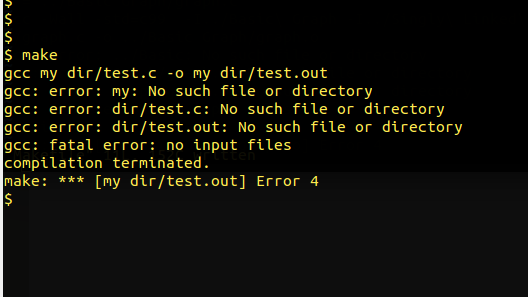 Thanks in advance for your help!!!

Use double or single quotes for the automatic variables.

Use single quotes, if you want to avoid shell expansion of the values referenced by the automatic variables:

Double quotes allow shell expansion. For example, if there was a dollar sign in DIR:

then "$@" would expand to "$my dir", and the shell would interpret $my as variable.

Not the answer you're looking for? Browse other questions tagged linux gcc makefile gnu or ask your own question.

345
gcc makefile error: “No rule to make target …”
293
How to make a SIMPLE C++ Makefile
3
Eclipse on Ubuntu: No rule to make target `all' error using existing makefile/project
0
make is rebuilding entire project when only one .c file has changed
3
Makefile rule not a target when using eval
1
How to automatically generate a Makefile help command
0
How do computed variables passed to included make files' functions get expanded?
0
How to get all the rules in a makefile to remember the name of the top-level (wildcard) target
1
Variables in non-recursive Makefiles
0
What is the difference between '$$directoryName' and '$(directoryName)' in makefile