I am trying to switch the href of a <link /> for theming purposes and the SCSS themes live in a packages folder of my monorepo that are symlinked in node_modules. I need to be able to compile and reference these.

I came across the following fixed issue: angular/angular-cli#3401 and have been trying to implement something similar:

How do I compile an SCSS file from node_modules that I can then lazy load in the app? Is there another/better approach I could try instead?

I have looked into the way that the Angular Material docs website approaches this problem and it seems they have a custom build script that compiles the SCSS files to CSS files in the assets directory before serving the application. I thought the fixed issue above removed the need for this step but perhaps not. Is this the only way it can be done?

And with the following serve script, I can access it via http://localhost:4200/themes/dark.bundle.css:

By setting "lazy": true means it won't appear in index.html but there is no mechanism that will lazy load that bundle for you, check that comment:

The lazy option doesn't actually lazy load anything. It just prevents it from being executed on application startup.

I agree "lazy": true is a bit confusing at first.

If you run ng build you can actually see what's gets outputed in your build and analyze all the files produced by cli.

You should be able to access your file directly at http://localhost:4200/dark.bundle.js but it wont appear in index.html as you set "lazy": true

If you want to get dark.bundle.css bundle instead of dark.bundle.js in dev mode you can use --extract-css flag.

The reason why cli generating styles in to js bundle in dev mode is because this way is much quicker. Bud when you do prod build like ng buld --prod it will output in to .css by default anyway.

I know this is an old post, but I have not found a full example just fragments to implement lazy loading in Angular for CSS files or js files. This is a solution with Angular 7.1.4 version and lazy loading of font-awesome 4.7 and bootstrap 4

"input" : "the location where the command from the 1st step will download bootstrap and font-awesome"

"lazy" : "the value of true will make sure that the compiler will not embed the bootstrap.min.css and font-awesome.css files into the compiled files which are send to browser"

"bundleName" : "is the name which you will find into dist folder"

NOTE: window.onload = function () used to make sure that the page is loaded (this because our files into the dist are in .js format; this is the quick way for Angular to compile)

NOTE: on build we use --extract-css=false to generate .js files

You must be able to see that the bootstrap.js and font-awesome.js are loaded separately like in the photo and also you be able to see for a moment the page without style => this is the moment when the style is loaded well after the DOM is loaded 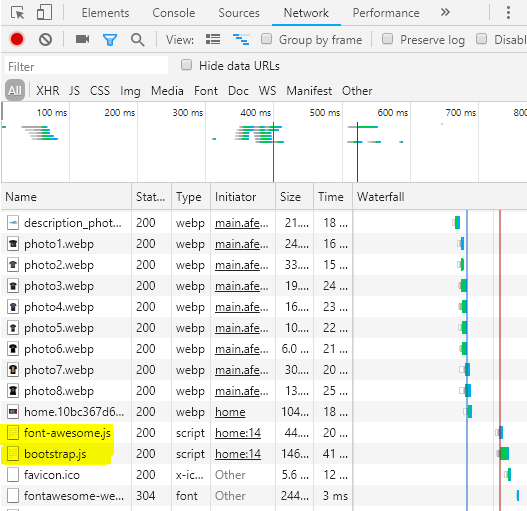 Since I can't comment the accepted answer, I'll provide an important note to it as a separate one. Please move it there and delete from here if needed. So, the accepted answer is based on separate CSS file. Since Angular 6 you can't use neither --extract-css or -ec flags in package.json for ng serve, nor extractCss: true in angular.json for serve config section. Though, you can use this approach to make it work. Then you can load your lazy style by using this approach with promise on APP_INITIALIZER.

For anyone who want to use global css scipts in .angular-cli.json lazy loaded without hash I wrote following script (e.g. patch-ng-cli.js)

Then run this script after npm install via npm scripts in package.json

Not the answer you're looking for? Browse other questions tagged angular sass angular-cli or ask your own question.