Custom back indicator image and iOS 11

Before iOS 11 this code did the trick, but now in iOS 11 the button is not centered vertically anymore as you can see here: 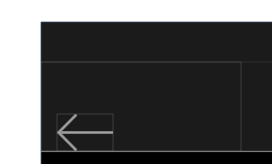 I could change the height of the back button image to 44, but that would break it in iOS < 11. I could also use two different images, but I was looking for something cleaner, like a way to vertically center the image in the back button container view.

Turns out that, as said by banxii1988, the problem is caused by setBackButtonTitlePositionAdjustment when the values deliberately move the title outside the visible screen. That was an hack to avoid removing the back button title in every view controller. I decided to remove this hack and I did the right thing which is:

Note that the back button title that you see in a view controller is set in the previous one in the navigation stack.

1) remove PositionAdjustment if have any. such as

For anyone who couldn't resolve it:

1) Search in your project (cmd+shift+f) for "setBackButtonTitle", you will find a code like below:

2) Change code above with this one:

I think this method is ok! It's useful for me.

After several tries and fails, this worked for us for iOS 11:

The trick was to move the "Back" text on the x axis quite a lot back, and a bit on the y axis, since setBackButtonTitlePositionAdjustment turned out to be affecting both the image and the text.

However, we don't know how long this solution will work, it might be "fixed" by Apple at any time

i would recommend method swizzling to resolve it, i've used this solution in some of my projects and it works fine.

1 - create a category of UIViewController.

The above solution by @Tonin works, but the only concern is nav bar left button text (like "Cancel") is transparent (clear color) when share to other app (email, message, etc), flip color if need share feature:

22
Navigation bar title and navigation buttons not appearing on iOS 11
4
Push a new node in firebase if not present
3
UINavigtion controller back button do not show properly
1
Default navigation style is misplaced for iOS 11
0
iOS11 backBarButtonItem disabled
1
How to fix iPhoneX back button image position?

1930
What's the difference between the atomic and nonatomic attributes?
181
Setting action for back button in navigation controller
89
UIBarButtonItem with custom image and no border
0
Adding both image and title to a navigation backBarButtonItem
293
iOS 7 status bar back to iOS 6 default style in iPhone app?
38
iOS 7 custom back button
81
Changing back button in iOS 7 disables swipe to navigate back
199
Removing the title text of an iOS UIBarButtonItem
297
Best practices for Storyboard login screen, handling clearing of data upon logout
19
iOS 7: Custom Back Indicator Image Position