In the kotlinx.coroutines library you can start new coroutine using either launch (with join) or async (with await). What is the difference between them?

I find this guide to be useful. I will quote the essential parts.

So you can think of a coroutine as something that manages thread in a very efficient way.

So launch starts a coroutine, does something, and returns a token immediately as Job. You can call join on this Job to block until this launch coroutine completes.

Conceptually, async is just like launch. It starts a separate coroutine which is a light-weight thread that works concurrently with all the other coroutines. The difference is that launch returns a Job and does not carry any resulting value, while async returns a Deferred -- a light-weight non-blocking future that represents a promise to provide a result later.

So async starts a background thread, does something, and returns a token immediately as Deferred.

You can use .await() on a deferred value to get its eventual result, but Deferred is also a Job, so you can cancel it if needed.

So Deferred is actually a Job. Read this for more details.

🦋 async is eager by default

There is a laziness option to async using an optional start parameter with a value of CoroutineStart.LAZY. It starts coroutine only when its result is needed by some await or if a start function is invoked.

launch and async are used to start new coroutines. But, they execute them in different manner.

In this example, my code is downloading 3 data on click of btnCount button and showing pgBar progress bar until all download gets completed. There are 3 suspend functions downloadTask1(), downloadTask2() and downloadTask3() which downloads data. To simulate it, I've used delay() in these functions. These functions waits for 5 seconds, 8 seconds and 5 seconds respectively.

As in output screenshot Toast, total execution time to complete all 3 downloads would lead to 5 seconds + 8 seconds + 5 seconds = 18 seconds with launch 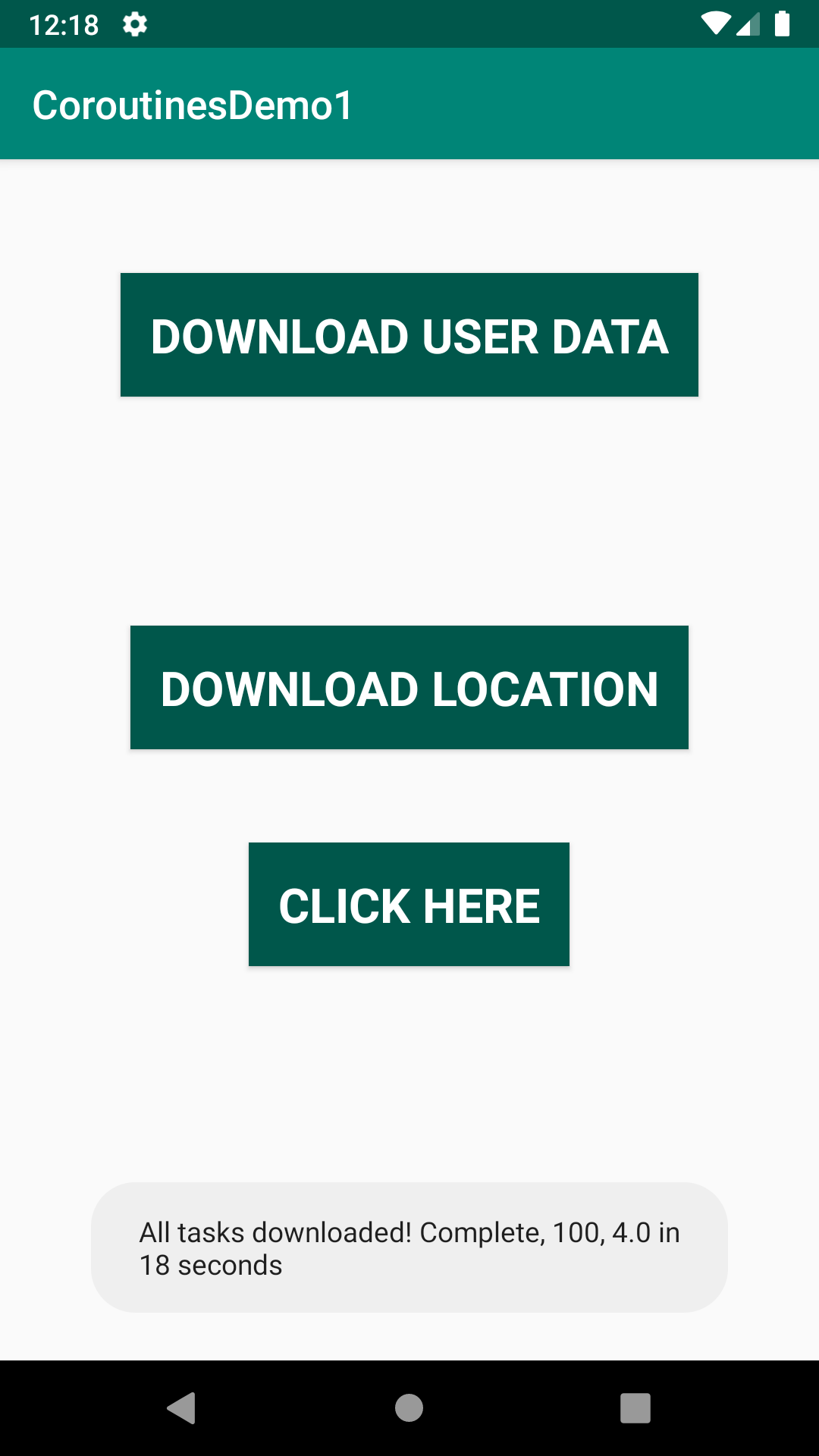 As we saw that launch makes execution sequentially for all 3 tasks. The time to complete all tasks was 18 seconds.

If those tasks are independent and if they do not need other task's computation result, we can make them run concurrently. They would start at same time and run concurrently in background. This can be done with async.

async returns an instance of Deffered<T> type, where T is type of data our suspend function returns. For example,

We can use the return object from async of type Deferred<T> to get the returned value in T type. That can be done with await() call. Check below code for example

This way, we've launched all 3 tasks concurrently. So, my total execution time to complete would be only 8 seconds which is time for downloadTask2() as it is largest of all of 3 tasks. You can see this in following screenshot in Toast message 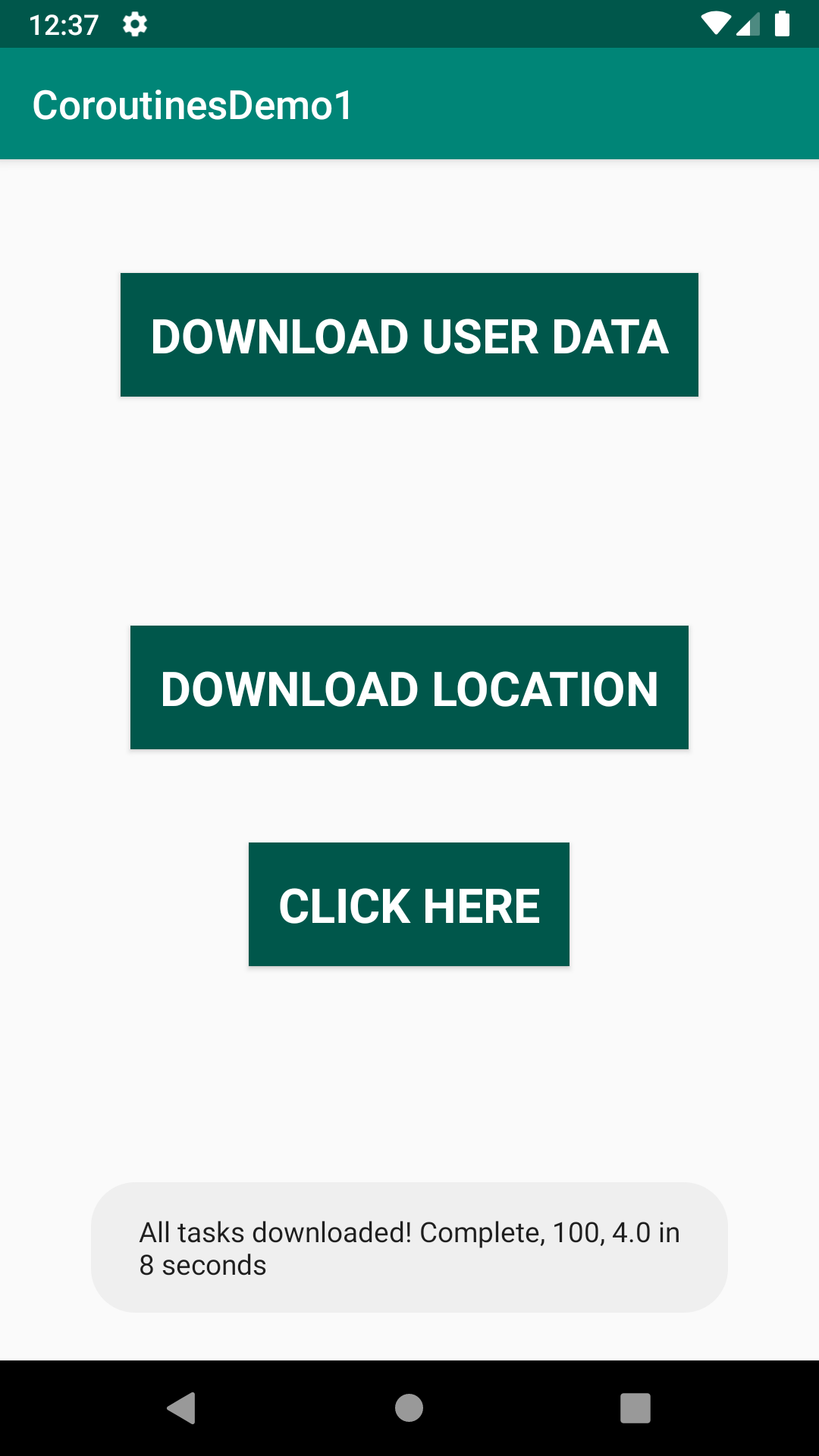 Async and Launch, both are used to create coroutines that run in the background. In almost every situation one can use either of them.

When you dont care about the task's return value, and just want to run it, you may use Launch. If you need the return type from the task/coroutine you should use async.

Alternate: However, I feel the above difference/approach is a consequence of thinking in terms of Java/one thread per request model. Coroutines are so inexpensive, that if you want to do something from the return value of some task/coroutine(lets say a service call) you are better off creating a new coroutine from that one. If you want a coroutine to wait for another coroutine to transfer some data, I would recommend using channels and not the return value from Deferred object. Using channels and creating as much number of coroutines as required, is the better way IMO

The only difference is in the return type and what functionality it provides.

Launch returns Job while Async returns Deferred. Interestingly enough, Deferred extends Job. Which implies it must be providing additional functionality on top of Job. Deferred is type parameterised over where T is the return type. Thus, Deferred object can return some response from the block of code executed by async method.

p.s. I only wrote this answer because I saw some factually incorrect answers on this question and wanted to clarify the concept for everyone. Also, while working on a pet project myself I faced similar problem because of previous Java background.

launch with join is used to wait until the job gets finished. It simply suspends the coroutine calling join(), leaving the current thread free to do other work (like executing another coroutine) in the meantime.

async is used to compute some results. It creates a coroutine and returns its future result as an implementation of Deferred. The running coroutine is cancelled when the resulting deferred is cancelled.

Consider an async method that returns a string value. If the async method is used without await it will return a Deferred string but if await is used you will get a string as the result

The key difference between async and launch:
Deferred returns a particular value of type T after your Coroutine finishes executing, whereas Job doesn’t. 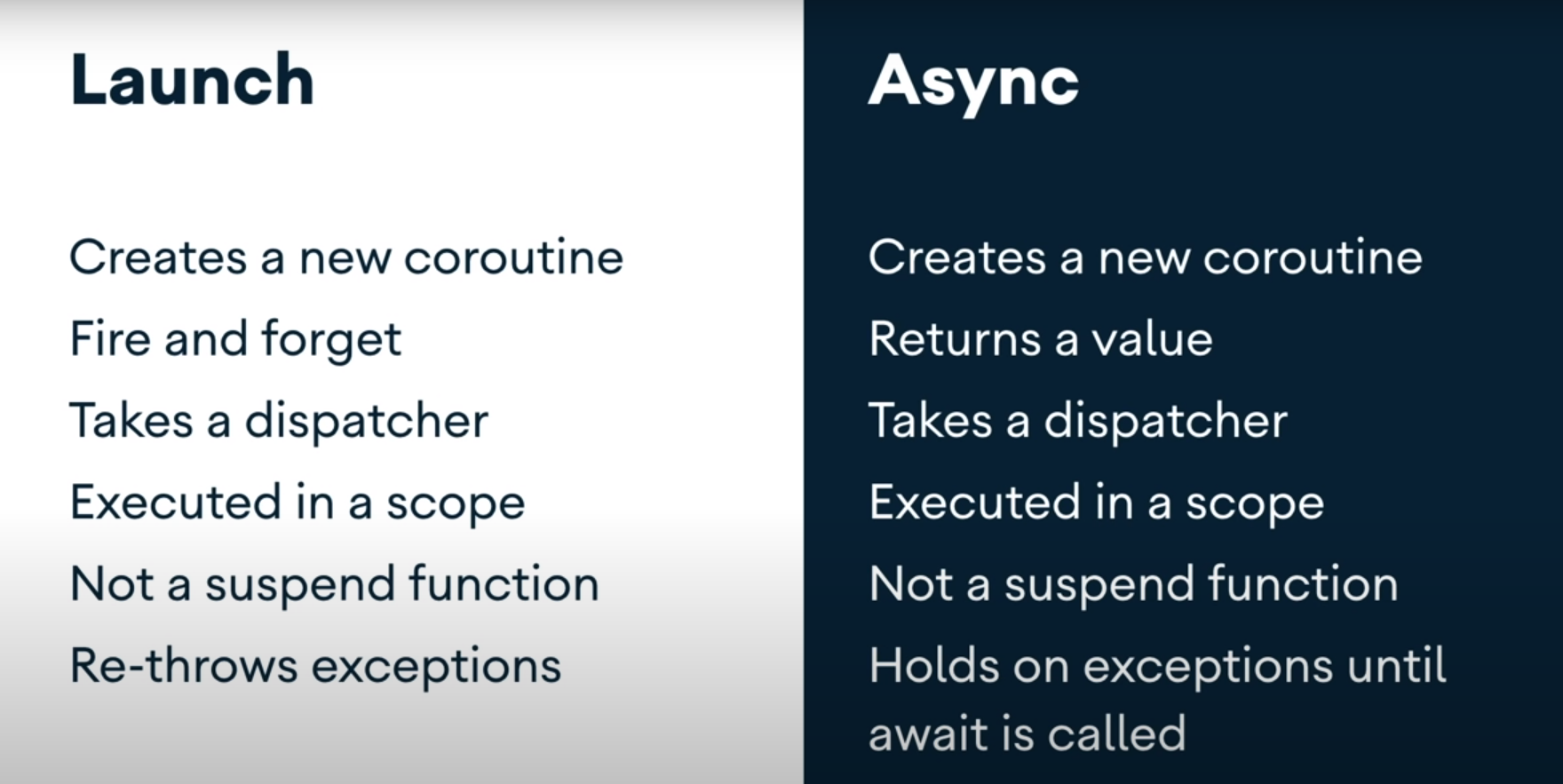 Alongside the other great answers, for the people familiar with Rx and getting into coroutines, async returns a Deferred which is akin to Single while launch returns a Job that is more akin to Completable. You can .await() to block and get the value of the first one, and .join() to block until the Job is completed.

34
When using kotlin coroutines, how do I unit test a function that calls a suspend function?
8
kotlin coroutine - how to ensure some commands run on UI main thread when invoked inside coroutine?
6
Why does launch swallow exceptions in kotlin coroutines?
6
runBlocking Coroutine doesn't block GlobalScope.launch (?)
5
How does exception propagation works on CoroutineScope.async?
4
How to propagate exceptions from a Job?
0
Multiple Animations are Not Launching At the Same Time in Jetpack Compose
0
Kotlin coroutines - async withTimeout which stops blocking the thread once it runs out of time
1
How to run multiple kotlin couroutines in parallel android?
0
Kotlin coroutineScope supposed to call all async functions concurrently
See more linked questions