Finding local maxima/minima with Numpy in a 1D numpy array

Can you suggest a module function from numpy/scipy that can find local maxima/minima in a 1D numpy array? Obviously the simplest approach ever is to have a look at the nearest neighbours, but I would like to have an accepted solution that is part of the numpy distro.

Note, these are the indices of x that are local max/min. To get the values, try:

If you are looking for all entries in the 1d array a smaller than their neighbors, you can try

You could also smooth your array before this step using numpy.convolve().

I don't think there is a dedicated function for this.

As of SciPy version 1.1, you can also use find_peaks. Below are two examples taken from the documentation itself.

Using the height argument, one can select all maxima above a certain threshold (in this example, all non-negative maxima; this can be very useful if one has to deal with a noisy baseline; if you want to find minima, just multiply you input by -1): 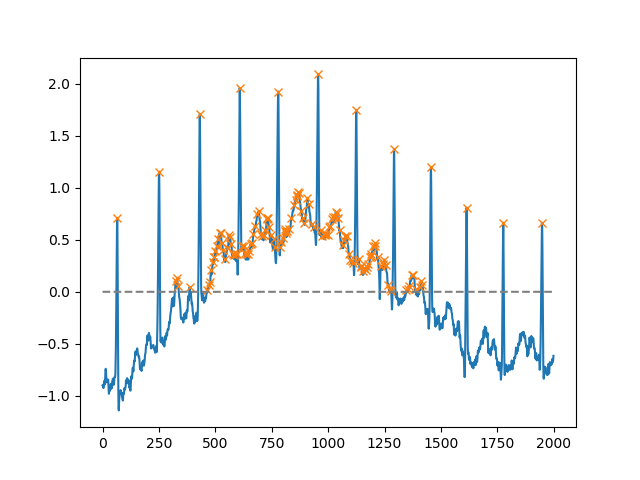 Another extremely helpful argument is distance, which defines the minimum distance between two peaks: 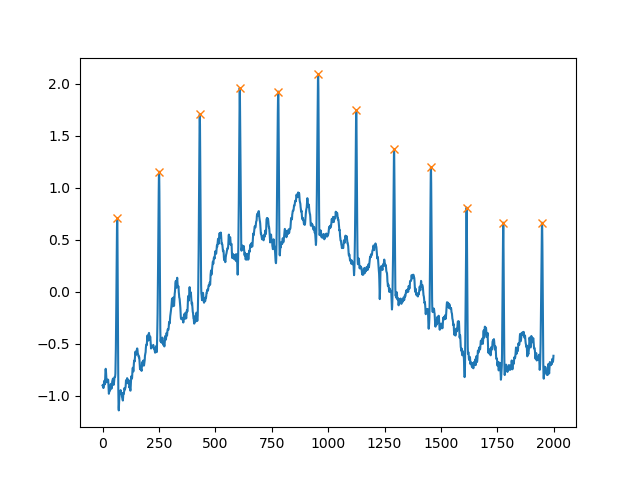 For curves with not too much noise, I recommend the following small code snippet:

The +1 is important, because diff reduces the original index number.

Another approach (more words, less code) that may help:

Since smoothing is, in the simplest sense, a low pass filter, the smoothing is often best (well, most easily) done by using a convolution kernel, and "shaping" that kernel can provide a surprising amount of feature-preserving/enhancing capability. The process of finding an optimal kernel can be automated using a variety of means, but the best may be simple brute force (plenty fast for finding small kernels). A good kernel will (as intended) massively distort the original data, but it will NOT affect the location of the peaks/valleys of interest.

Fortunately, quite often a suitable kernel can be created via a simple SWAG ("educated guess"). The width of the smoothing kernel should be a little wider than the widest expected "interesting" peak in the original data, and its shape will resemble that peak (a single-scaled wavelet). For mean-preserving kernels (what any good smoothing filter should be) the sum of the kernel elements should be precisely equal to 1.00, and the kernel should be symmetric about its center (meaning it will have an odd number of elements.

Given an optimal smoothing kernel (or a small number of kernels optimized for different data content), the degree of smoothing becomes a scaling factor for (the "gain" of) the convolution kernel.

All the prior solutions posted above compute the first derivative, but they don't treat it as a statistical measure, nor do the above solutions attempt to performing feature preserving/enhancing smoothing (to help subtle peaks "leap above" the noise).

Finally, the bad news: Finding "real" peaks becomes a royal pain when the noise also has features that look like real peaks (overlapping bandwidth). The next more-complex solution is generally to use a longer convolution kernel (a "wider kernel aperture") that takes into account the relationship between adjacent "real" peaks (such as minimum or maximum rates for peak occurrence), or to use multiple convolution passes using kernels having different widths (but only if it is faster: it is a fundamental mathematical truth that linear convolutions performed in sequence can always be convolved together into a single convolution). But it is often far easier to first find a sequence of useful kernels (of varying widths) and convolve them together than it is to directly find the final kernel in a single step.

Hopefully this provides enough info to let Google (and perhaps a good stats text) fill in the gaps. I really wish I had the time to provide a worked example, or a link to one. If anyone comes across one online, please post it here!

I believe there is a much simpler approach in numpy (a one liner).

To find a local max or min we essentially want to find when the difference between the values in the list (3-1, 9-3...) changes from positive to negative (max) or negative to positive (min). Therefore, first we find the difference. Then we find the sign, and then we find the changes in sign by taking the difference again. (Sort of like a first and second derivative in calculus, only we have discrete data and don't have a continuous function.)

The output in my example does not contain the extrema (the first and last values in the list). Also, just like calculus, if the second derivative is negative, you have max, and if it is positive you have a min.

Thus we have the following matchup:

Why not use Scipy built-in function signal.find_peaks_cwt to do the job ?

Update: I wasn't happy with gradient so I found it more reliable to use numpy.diff.

Regarding the issue of noise, the mathematical problem is to locate maxima/minima if we want to look at noise we can use something like convolve which was mentioned earlier.

None of these solutions worked for me since I wanted to find peaks in the center of repeating values as well. for example, in

the answer should be

I did this using a loop. I know it's not super clean, but it gets the job done.

minm and maxm contain indices of minima and maxima, respectively. For a huge data set, it will give lots of maximas/minimas so in that case smooth the curve first and then apply this algorithm.

and for the minima:

And ... yet another answer.

This one requires NO extra packages (except numpy). For example,

will return a list of all the local minima

it could easily be extended to also look for maxima.

Not the answer you're looking for? Browse other questions tagged python numpy or ask your own question.

2
How to find local minima using Scipy
0
Annotating local minima below a given threshold of (y) using matplotlib and pandas
13
Find local maximums in numpy array
14
Finding singulars/sets of local maxima/minima in a 1D-NumPy array (once again)
14
Find all local Maxima and Minima when x and y values are given as numpy arrays
13
How to find the local minima of a smooth multidimensional array in NumPy efficiently?
11
calculate histogram peaks in python
7
These spectrum bands used to be judged by eye, how to do it programmatically?
3
Counting the numbers in a list that are larger than their neighbors
8
Calculate energy for each frequency band around frequency F of interest in Python
See more linked questions

732
How can the Euclidean distance be calculated with NumPy?
806
How do I print the full NumPy array, without truncation?
974
Peak detection in a 2D array
726
Dump a NumPy array into a csv file
647
Convert pandas dataframe to NumPy array
267
Moving average or running mean
1
split signal right before local minima in Numpy
14
Finding singulars/sets of local maxima/minima in a 1D-NumPy array (once again)
0
Finding Local Minimum In 1d array
1
Finding the local maxima and local minima in the data python