I am using webRTC streaming via RTCMultiConnection. I created a Cordova application and get the blob URL from the server in the video tag. In Android and browsers, this works well. In IOS, the video plays but the control buttons do not work. Also, the video's position is static on the application. I change the page in the application but the video always stays. When I try to pull the page, it looks like this: 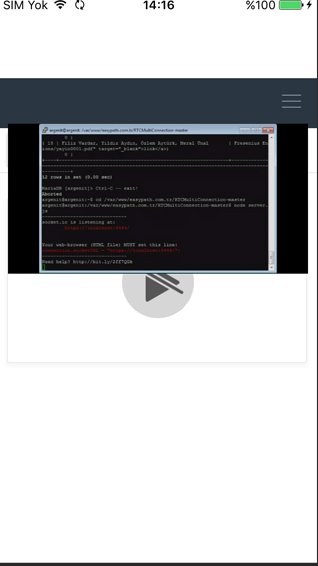 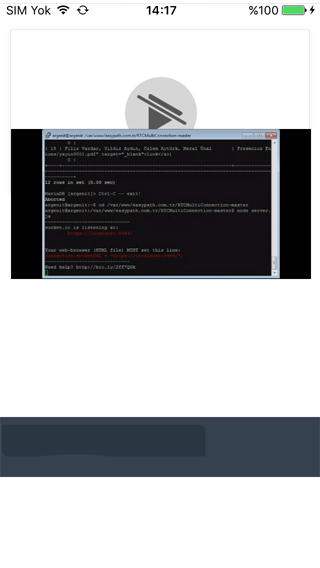 And how I append in JS:

Edit: I can see my iPhone's front camera on the browser live. But I can not see myself, on iPhone.

The video player does not work.

As this SO answer suggests:

For the controls, as the videos always play in full-screen, the space left will capture all the click and touch events.

A workaround suggested above could be to set the video's tag width & height to 1/1 dimensions - fixed position to -10,-10 and trigger "play" manually with a custom UI instead the video.

Currently, Safari optimizes video presentation for the smaller screen on iPhone or iPod touch by playing video using the full screen—video controls appear when the screen is touched, and the video is scaled to fit the screen in portrait or landscape mode. Video is not presented within the webpage. The height and width attributes affect only the space allotted on the webpage, and the controls attribute is ignored. This is true only for Safari on devices with small screens. On Mac OS X, Windows, and iPad, Safari plays video inline, embedded in the webpage.

Default Height and Width on iOS

The placeholder provides a way for the user to play the media. If the iOS device cannot play the specified media, there is a diagonal bar through the control, indicating that it cannot play.

In case you are willing to consider alternatives, this cordova plugin could be useful:

This plugin allows you to stream audio and video in a fullscreen, native player on iOS and Android.

6
Safari: unable to dynamically load video from blob url
4
How to hide the controls of the html5 video tag with ios/iphone devices on webkit/cordova/phonegap?
0
Html5 video blob on iOS 9

1092
How to change the name of an iOS app?
1385
How can I check for an active Internet connection on iOS or macOS?
892
How to check iOS version?
1071
How to change Status Bar text color in iOS
5
Inline youtube video doesn't work in cordova application on iOS
4
webkit-playsinline stops working when returning to page in cordova iOS app
0
Cordova iOS: Load videos with downloaded html's and video files
1
Embed h264 stream using HTML5 video tag on iOS
1
Cordova iOS play localy stored video file