Given a linearly separable dataset, is it necessarily better to use a a hard margin SVM over a soft-margin SVM?

I would expect soft-margin SVM to be better even when training dataset is linearly separable. The reason is that in a hard-margin SVM, a single outlier can determine the boundary, which makes the classifier overly sensitive to noise in the data.

In the diagram below, a single red outlier essentially determines the boundary, which is the hallmark of overfitting 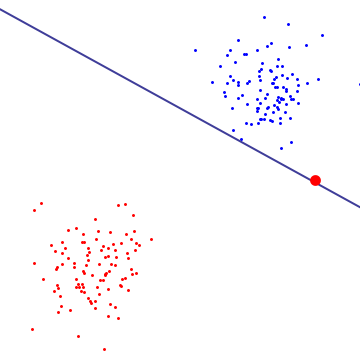 To get a sense of what soft-margin SVM is doing, it's better to look at it in the dual formulation, where you can see that it has the same margin-maximizing objective (margin could be negative) as the hard-margin SVM, but with an additional constraint that each lagrange multiplier associated with support vector is bounded by C. Essentially this bounds the influence of any single point on the decision boundary, for derivation, see Proposition 6.12 in Cristianini/Shaw-Taylor's "An Introduction to Support Vector Machines and Other Kernel-based Learning Methods".

The result is that soft-margin SVM could choose decision boundary that has non-zero training error even if dataset is linearly separable, and is less likely to overfit.

Here's an example using libSVM on a synthetic problem. Circled points show support vectors. You can see that decreasing C causes classifier to sacrifice linear separability in order to gain stability, in a sense that influence of any single datapoint is now bounded by C.

For hard margin SVM, support vectors are the points which are "on the margin". In the picture above, C=1000 is pretty close to hard-margin SVM, and you can see the circled points are the ones that will touch the margin (margin is almost 0 in that picture, so it's essentially the same as the separating hyperplane)

Here, alphas and b are parameters that are found during training procedure, xi's, yi's are your training set and x is the new datapoint. Support vectors are datapoints from training set which are are included in the predictor, ie, the ones with non-zero alpha parameter.

In my opinion, Hard Margin SVM overfits to a particular dataset and thus can not generalize. Even in a linearly separable dataset (as shown in the above diagram), outliers well within the boundaries can influence the margin. Soft Margin SVM has more versatility because we have control over choosing the support vectors by tweaking the C.

Not the answer you're looking for? Browse other questions tagged algorithm machine-learning svm or ask your own question.

1
Why do we need a soft-margin if we are using a kernel in SVM?
2
Dimension of Feature Space to get separable Data in support vector machines

12
Does SVM classification always produces unique solution?
7
How to implement a soft-margin SVM model using Matlab's quadprog?
2
In SVM, can a support vector not be a training sample?
2
SVM Hard margin: why imbalanced dataset may cause bad results?
0
Plot SVM margins using MATLAB and libsvm
1
What are the disadvantages of a Kernel SVM compared to a Linear SVM in an expanded feature space?
0
About SVM, what is the role of soft margin？
0
Sklearn built-in function for Hard margin SVM