What are the differences between double-dot “..” and triple-dot “…” in Git commit ranges?

Some Git commands take commit ranges and one valid syntax is to separate two commit names with two dots .., and another syntax uses three dots ....

What are the differences between the two?

It depends on whether you're using a log command or a diff command. In the log case, it's in the man git-rev-parse documentation:

Which basically means that you'll get all commits that are in either of the two branches, but not in both.

In the diff case, it's in the man git-diff documentation:

Which is a bit fuzzy. Basically it means it shows only the differences in that branch compared to another branch: it looks for the last common commit with the first committish you gave it, and then diffs the second committish to that. It's an easy way to see what changes are made in that branch, compared to this branch, without taking notice of changes in this branch only.

The .. is somewhat simpler: In the git-diff case, it's the same as a git diff A B and just diffs A against B. In the log case, it shows all commits that are in B but not in A.

When you're using commit ranges like .. and ... with git log, the difference between them is that, for branches A and B,

will show you all of the commits that B has that A doesn't have, while

Here is a visual representation of git log A..B. The commits that branch B contains that don't exist in A is what is returned by the commit range, and is highlighted in red in the Venn diagram, and circled in blue in the commit tree:

These are the diagrams for git log A...B. Notice that the commits that are shared by both branches are not returned by the command:

You can make the triple-dot commit range ... more useful in a log command by using the --left-right option to show which commits belong to which branch:

Someday I might add my own explanation for how the commit ranges work with git diff, but for now, you might want to check out What are the differences between double-dot ".." and triple-dot "..." in Git diff commit ranges?.

Both notations are easily explainable regardless of the specific Git commands that use them.

Let's assume that A and B are some commits, so they can also be names of branches, tags, etc.

Whereas A...B takes one of two meanings:

When the Git command may take a range of commits and both commits are on the same branch, both notations mean the same.

I have prepared a diagram that illustrates both notations: 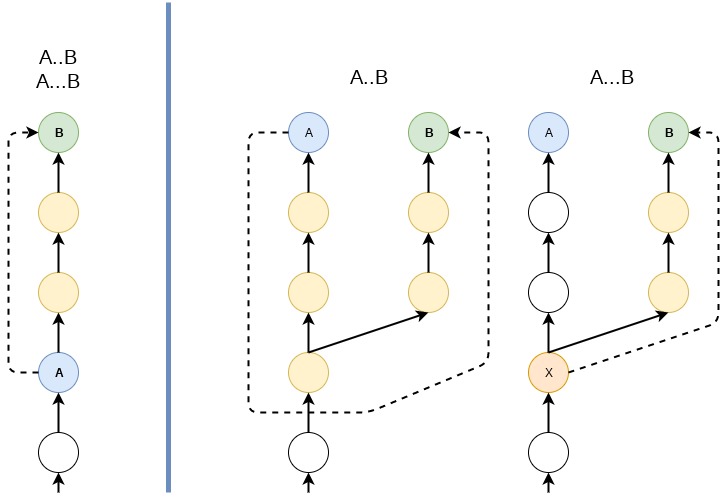 Not the answer you're looking for? Browse other questions tagged git git-checkout git-diff git-log git-rev-list or ask your own question.

3358
View the change history of a file using Git versioning
12584
What is the difference between 'git pull' and 'git fetch'?
2163
How to retrieve the hash for the current commit in Git?
2979
How to find and restore a deleted file in a Git repository
8043
How do I force “git pull” to overwrite local files?
2284
How do I show the changes which have been staged?
5510
Move the most recent commit(s) to a new branch with Git
2339
What is the best (and safest) way to merge a Git branch into master?
2206
What are the differences between .gitignore and .gitkeep?