I'm looking for more information on the message below. Xcode 9 seems to be hanging for a couple minutes already...

How can I tell Xcode 9 to quickly recognize my previously used device updated to iOS 11?

There are multiple solutions for this:

Solution 2: Disconnect device from the system. Restart both iPhone and Xcode and then rebuild again.

Solution 3 worked for me!

Unpair your device and then pair it again. Thereafter follow Step 3.

I clicked ‘Cancel Running’, opened the Devices list, unpaired my iPhone, removed my USB cable and reconnected it, paired the iPhone, and then was asked on my iPhone to enter my passcode ("pin code"). Did this and then was finally able to pair my phone correctly.

Wait a few minutes. The application will start automatically

Restarting Xcode worked for me (quit and start again).

What didn't work for me:

It turns out XCode opens device manager window beneath it and waits for you to hit the next button. Switch to that window, hit next and you get the progress bar for the process to show up. 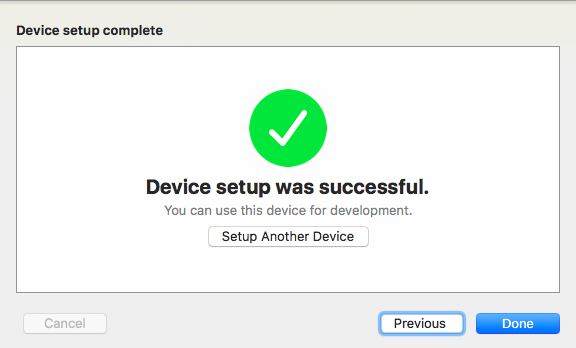 In my case, iTunes was open, so

Now the device is ready on XCode

below solution worked for me, follow steps to resolve your issue:

Step 4 : Removed iPhone USB cable and reconnect to the system

Step 5 : Pair the iPhone when you connect then you will be asked to Trust or Don't Allow, Please click Truct on your iPhone and enter your passcode (Pin Code)

Note : I performed all the above steps they worked for me. The issue of my device debugger gone.

Below is the Screenshot of Devices and Simulators Menu

I unplugged my cable and saw this. After it reached the end I was able to run it no problems.

You don't have to unplug to see this; just hit cancel and you will see its progress.

Wait a few seconds, it's all.

I found deleting the app from the device and re-installing with Xcode solved this issue.

I have been using my iPhone X to debug via Network and suddenly had this problem.

Disable "Connect via network" and try again with USB. This trick worked for me. 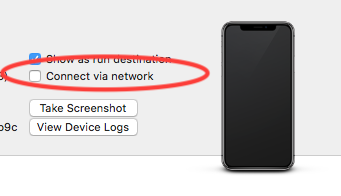 I realised I had less than 100 MBs of free space on my disc. Freeing up disk space solved the issue for me!

I had the same problem many times, these things worked for me:

When you plug a New device which is having iOS 11, Xcode 9 will Prepare Debugger Support for that device, At this time you should Wait to complete it.

Then run the project in that device it will run smoothly.

If you didn't keep patience while creating Debugger Support then it will throw the error mentioned in the question.

Tried all the "speedrun" tips up till 2019-11-24 without luck. The wait seemed inevitable but incredibly long in my case:

with a freshly upgraded iOS version.

This is required when you connect a device with an iOS version that the respective computer's Xcode didn't see before. It saves them in /Users/username/Library/Developer/Xcode/iOS DeviceSupport and it does take a while. Don't restart Xcode as it will not help you, just wait for it to finish.

It takes quite some time because these debugger support files occupy a lot of space (29 GB for me), though you can safely delete any version from there, and if you connect a device with that version again, it will re-save it from scratch.

So if you just upgraded your iOS, then the "from scratch" part could take longer than usual, also depending on your network condition. In my case, it is definitely much much longer than the "10-15min" other people claimed. I measure it by hours.

A lot of tricks seem to have worked but they neglect the fact that time goes on as you try things while Xcode keeps working on the setup in the background, and quite possibly resumes its job whenever you do a restart/reboot cycle.

This led me to noticing that my Xcode version is just one step behind the iOS point release. After upgrading my Xcode, it worked.

But it took longer because I removed the iOS DeviceSupport folder by following a tip!

So here are my suggestions:

Clean : Shift-Command-K is what works for me.

I updated to iOS 11.0.3 then the error appeared. After restarting my iPhone and XCode, it showed "Could not launch the app", so I navigated to the phone's device management to trust, then it solved.

I had this problem because I hadn't given iTunes permissions to run on the computer. (I don't use iTunes for music, so I had foolishly just hit "decline" in annoyance whenever the EULA dialog box came up.)

For me it Worked after following the below steps

Step-1 Go to Devices and Simulator

Wait for Few seconds to Load the Xcode, If you want you can restart Xcode also.

Tick back both the options and it will be normal to install your app back.

iPhone is busy: Preparing debugger support for iPhone Xcode will continue when iPhone is finished.

An error was encountered while attempting to communicate with this device. (The service is invalid.) Please try rebooting and reconnecting the device. (0xE8000022).

Do this Two Task to solve your problem:

First Go to Xcode then -> Preferences -> Accounts then below click the plus icon to add apple id it must me same as your iphone device apple id.

Second Just change the cable if first solution can not work

For those looking for solution with Apple TV, I just experience the exact problem "Apple TV is busy: Preparing debugger support for Apple TV” with Apple TV 4K with my Macbook Air (Early 2015)

The solution is not to unpair or restart devices. But to switch network. I brought it to a faster and more open network and it works perfectly.

If running beta software and you update the OS, make sure to get the latest Xcode beta also. This fixed it for me.

I left AppCode open while Xcode was trying to process the device, closing it solved the problem. Maybe can be one of the possible issues.

Not the answer you're looking for? Browse other questions tagged ios xcode ios11 xcode9 or ask your own question.

386
Xcode "Device Locked" When iPhone is unlocked
20
How to avoid warning : Preparing debugger support of iPAD
8
iOS 9.3.1 Xcode 7.3 "Unable to copy symbols from this device"
4
Preparing debugger support for iPhone
10
iphone is busy: waiting for device, xcode will continue when iphone is finished
0
AppleTv is busy: Copying cache files from device Xcode will continue when AppleTv is finished
1
Xcode can't build to physical iPad

1246
How can I develop for iPhone using a Windows development machine?
933
Git ignore file for Xcode projects
1286
Xcode - How to fix 'NSUnknownKeyException', reason: … this class is not key value coding-compliant for the key X" error?
22
Xcode Organizer: can not use iPhone (dyld_shared_cache_extract_dylibs failed)
255
Xcode Simulator: how to remove older unneeded devices?
851
Xcode 7 error: "Missing iOS Distribution signing identity for ..."
48
How to fix Xcode error: Could not locate device support files on iPhone with Xcode
2
Xcode 10 “appletv is busy: Preparing debugger support for apple tv”
5
IOS 13.2 (17B84) Device Support files for Xcode
7
Xcode 11 "iphone is busy: Making iphone ready for development"