AWS provides cognito which provides the developer with sign-up and sign-in functionality including federations with OpenId compatible identity providers such as facebook, google etc.

There are two types of categories in cognito developer console. These are managing user pool and managing federated identities.

I'm just a little bit confused because both are very similar even we want to provide our client to login with their facebook account. The cognito user pool itself provides federation and federation identity pool also provide it by authentication providers.

The question is that if I want to allow my clients to use their own facebook account for sign-in, which categories should I use? user pool or federated identities?

In addition, if I want to configure authorizer in API gateway I have to create cognito user pool but federated identity pool. Is that the main reason choosing the cognito category?

You can think of user pools as sort of a directory which contains user attributes such as name, email, phone number etc. This also provides sign up, sign in capability. You can federate users into user pools. Currently you can use Facebook, Google, and SAML as identity providers for user pools.

What you use depends on your use case. If you don't require AWS resources for your app, probably User Pools is all you need.

Amazon Cognito User Pool makes it easy for developers to add sign-up and sign-in functionality to web and mobile applications. It serves as your own identity provider to maintain a user directory. It supports user registration and sign-in, as well as provisioning identity tokens for signed-in users.

Cognito Identity Pool (or Cognito Federated Identities) on the other hand is a way to authorize your users to use the various AWS services. Say you wanted to allow a user to have access to your S3 bucket so that they could upload a file; you could specify that while creating an Identity Pool. And to create these levels of access, the Identity Pool has its own concept of an identity (or user). The source of these identities (or users) could be a Cognito User Pool or even Facebook or Google.

The Cognito Identity Pool simply takes all the identity providers and puts them together (federates them). And with all of this it can now give your users secure access to your AWS services, regardless of where they come from. 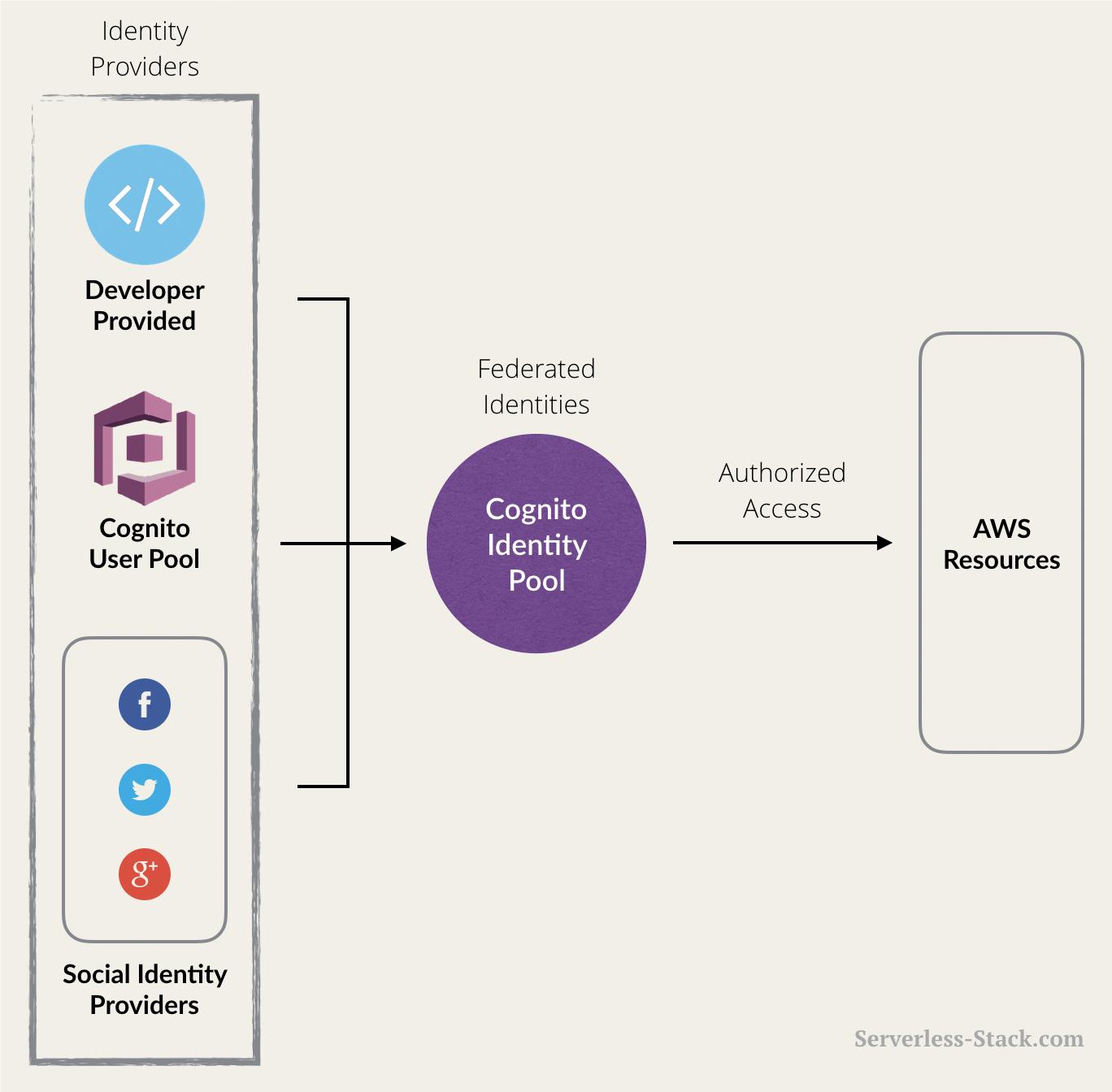 So in summary, the Cognito User Pool stores all the users which then plugs into Cognito Identity Pool which can give the users access to AWS services.

I believe AWS should separate User Pool and Identity Pool, and change the names. Because mixing up different services under the same name causes confusions, and the names do not give any clue about the services.

AWS has been mixing up this Identity Provider/Authentication service with Identity Pool/Authorization service, besides their strange naming, hence causing massive confusions, incurring the questions.

The name "Identity Pool" does not make any sense as it has no indication on what the service does. A word must navigate thinking that leads to understanding, not confusion. AWS exactly does the opposite.

Before jumping to what Identity Pool does/is, better to understand a few things.

If you have an AWS account user, you can get AWS_ACCESS_KEY_ID and AWS_SECRET_ACCESS_KEY for the user, and then get a STS token using e.g. MFA.

In reality, an IAM Role defines which actions allowed on which AWS resources for a STS token. It may not allow delete but create. So it depends on the IAM Role what a STS Token allows us to do.

However, the point to note is, there is a association between an IAM Role and a STS Token you get, and someone must define the association for you.

What Identity Pool gives you

It gives a STS Token, using which you can manipulate AWS resources in an AWS account.

Situation where Identity Pool is useful

Another problem of AWS for me is their documentation does not declare This is when you need Identity Pool, but instead keep repeating the word Federation which does not point to what Identity Pool does, allow you to manipulate AWS resources with a STS Token.

If you are in the situation where:

Then you can use Identity Pool to get a STS token for the account e.g Google you logged in, and can manipulate the AWS resource.

For instance, if you have 1000+ users in your corporate AD and want to let them use AWS resources somehow. Would you create 1000+ AWS IAM users? Or find a way to map them to a few IAM roles such as "Administrator", "Accounting", "Finance", "IT"?

What Identity Pool does

Identity Pool maps an Identity Provider token (e.g. Google token) to an IAM Role in an AWS account, and gives a STS Token.

AWS calls this "mapping" as Federation, in my understanding.

I would recommend completely forgetting User Pool when discussing Identity Pool. User Pool is just another Identity Provider which you may not need at all. 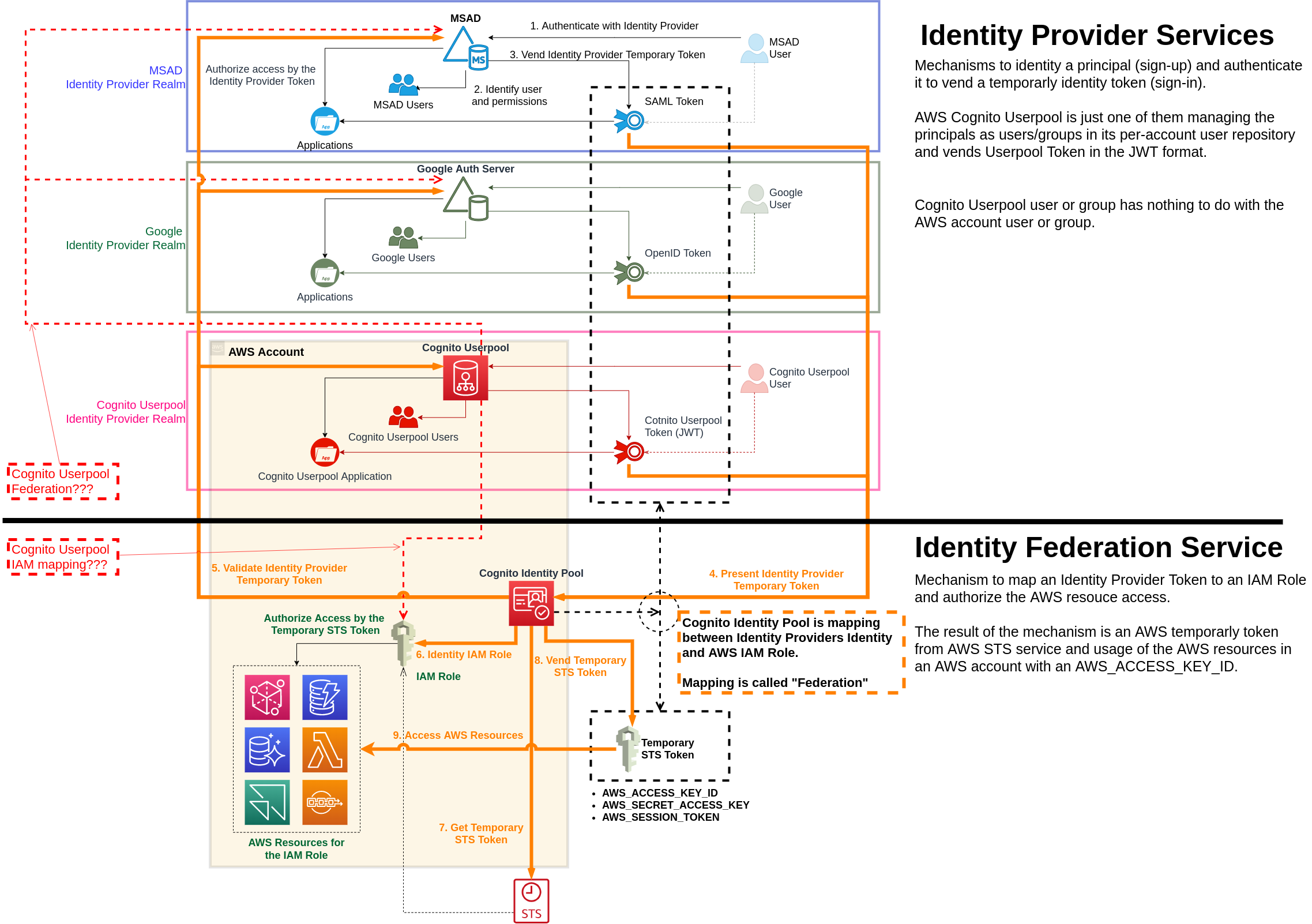 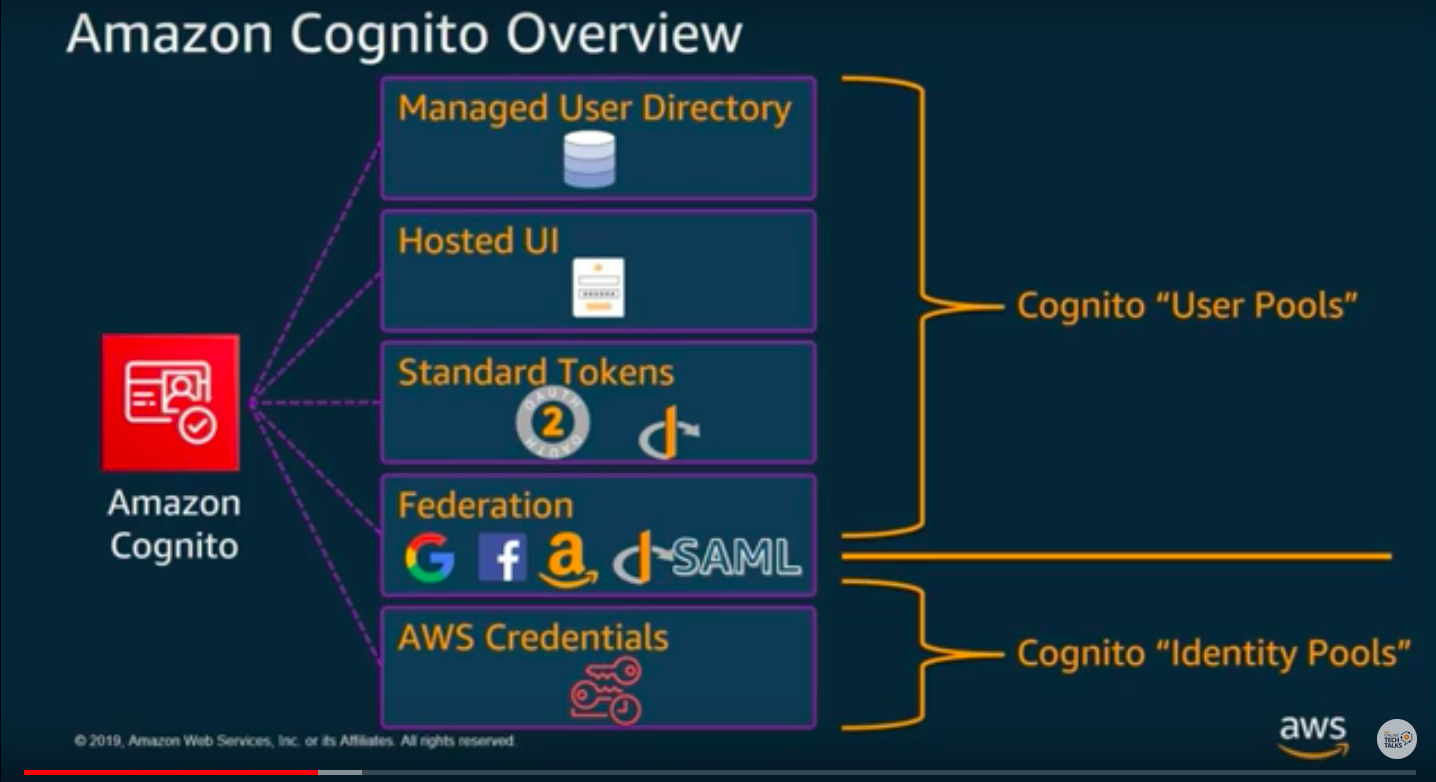 Not the answer you're looking for? Browse other questions tagged amazon-web-services amazon-cognito or ask your own question.

3
How to get Cognito Identity ID given the Cognito User Pool ID?
0
How can I create a member-only page with S3?
0
AWS AppSync OIDC