What is the difference between the bridge pattern and the strategy pattern?

I tried to read many articles on dofactory, wikipedia and many sites. I have no idea on differences between bridge pattern and the strategy pattern.

As I understand it, you're using the strategy pattern when you're abstracting behavior that could be provided from an external source (eg. config could specify to load some plugin assembly), and you're using the bridge pattern when you use the same constructs to make your code a bit neater. The actual code will look very similar - you're just applying the patterns for slightly different reasons.

The syntax is similar but the goals are different:

Bridge pattern decouples abstraction and implementation and allows both to vary independently.

Use this pattern when :

Strategy patterns enable you to switch between multiple algorithms from a family of algorithms at run time.

Use Strategy pattern when :

When do you use the Bridge Pattern? How is it different from Adapter pattern?

I was thinking the same, but recently I had to use bridge and realized that bridge is using strategy and adding abstraction to the context so that you later can make more changes without changing the client. When using Strategy without the abstraction the design is not as flexible and may require changes to the client later. But when using the whole bridge the design becomes even more flexible. Here you can se how going from Strategy to Bridge gives more flexibility. Also we assume that now "visa" and "master" are not only available on cards but on phones and chips also; and if we use bridge it is much easier to add that support.

Decouple an abstraction from its implementation so that each may vary. independently. 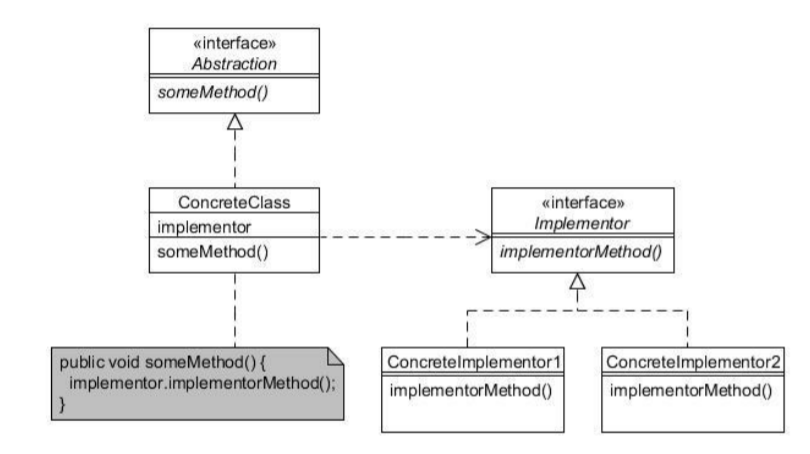 Take a remote. The remote has buttons 1-6. This is the concrete class in the diagram above. Each button will work different depending on if the remote is used for a TV or DVD. The functionality for each button is abstracted from the implementation by the implementer interface.

This allows us to change how the remote will work for each device.

Define a family of algorithms , encapsulate each one and make them interchangeable.

In strategy, if we were looking at the remote scenario. The "state" is the entire remote which we swap out by changing the context's state reference. The "concreteStateA" (TV remote) "concreteStateB" (DVD Remote).

Adding to willcodejavaforfood's answer, they can be the same, in implementation. However you use strategy to swap strategies such as sorting strategy, while you use bridge to bridge the implementations of two object's say a database wrapper, and a network adaptor so the client code can use either working against the same API. So the naming actually says it all

From the wiki on Strategy pattern

Just to add to what has already been said about the pattern comparison (difference of intent, ...): the Bridge pattern is also intentionally structured to allow the abstraction hierarchy side to vary. In languages like C# this could imply you have an abstraction base that contains virtual methods as a way to allow intended variations that don't cause problems for existing consumers. Other than that the two patterns might appear identical for the most part.

Strategy pattern is used when you wish to plug algorithm or strategy at run time. As category of pattern also implies that it deals with behaviour of the objects. On the other hand bridge is structural pattern and deals with structural hierarchy of the objects. It decouples the abstraction from implementation by introducing a refined abstraction between them. Refined abstraction can be confused with the run time strategy plugged (In Strategy pattern). Bridge pattern deals with the structural aspects by providing a mechanism to avoid creating n number of classes.

For strategy pattern only the implementation varies.

Suppose, class A is using class B which has multiple implementations available. So in that case B would be abstract with actual implementation provided at runtime. This is strategy pattern

Now if A itself is abstract. Both A and B may vary. You would use Bridge pattern.

I think there's a slight difference between them in the context they're being used.

I use the Bridge pattern to separate orthogonal concepts which they both belong to a bigger one - to let them vary independently. It usually involves multiple abstractions.

IMO, the Strategy pattern is simpler or more flat. It serves to OCP for sure but doesn't necessarily to be part of another and bigger concept like the Bridge pattern.

Not the answer you're looking for? Browse other questions tagged design-patterns strategy-pattern bridge or ask your own question.