Let's suppose that we have got a list which appends an integer in each iteration which is between 15, 32(let's call the integer rand). I want to design an algorithm which assigns a reward around 1 (between 1.25 and 0.75) to each rand. the rule for assigning the reward goes like this.

I had developed the code below for this algorithm:

The algorithm works quite fine, but if you look at examples below, you would notice the problem with algorithm.

As you might have noticed, Algorithm doesn't consider the distance between avg and bounds (15, 32). The more avg moves towards lower bound or higher bound, the more modified_reward gets unbalanced.

I need modified_reward to be uniformly assigned, no matter avg moves toward upper bound or lower bound. Can anyone suggest some modification to this algorithm which could consider the distance between avg and bounds of the list.

I don't understand why you are calculating md_reward like this. Please provide logic and reason. But

will not give what you are looking for. Because lets consider below cases

Now modify your function with something below.

I have used below method

min(X) will be avg and max(X) is max_value

and for case rand < avg

min(X) in min_value and max(X) is avg

Putting together these two requirements:

I need modified_reward to be uniformly assigned, no matter avg moves toward upper bound or lower bound.

is slightly tricky, depending on what you mean by 'uniformly'.

If you are happy with two linear relationships, you can aim for a situation where modified_reward depends on rand like this: 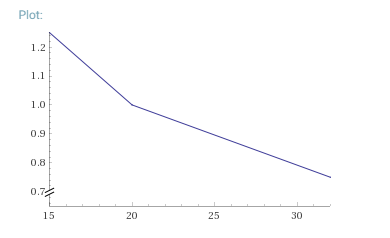 which I produced with this Wolfram Alpha query. As you can see, this is two linear relationships, with a 'knee' at avg. I expect you'll be able to derive the formulae for each part without too much trouble.

This code implements a linear distribution of weights proportional to the distance from average towards your given limits.

If you tell me what shape you want for the distribution we can modify Rewarder.distribution to suit.

You can choose which error function suits your application and how much error you can accept at min and max. I'd also expect that you'd integrate all these functions into your class, I've split everything out so we can see the parts.

Regarding the calculating the mean, do you need to keep the list of values and recalculate each time or can you keep a count and running total of the sum? Then you would not need numpy for this calculation.

This is the linear solution inspired by @AakashM. I don't know if this is what you were looking for, but this fits your description.

Not the answer you're looking for? Browse other questions tagged python algorithm numpy or ask your own question.

34
What is the difference between O, Ω, and Θ?
1206
Easy interview question got harder: given numbers 1..100, find the missing number(s) given exactly k are missing
9
Run-Times: Bounds vs Case
2
How can the worst case for an algorithm have different bounds?
1
Find 'average' with equal upper and lower distance to values of a given set
0
delete specific row in python pandas DataFrame based on row comparison
1
Why does this program work when the “guess” number is randomly generated, but not when it's based on the average of the upper and lower bound?
2
Gekko, dynamically limit lower bound of variables based on intervals