Is it currently impossible to publish UWP apps to Store when using F#?

I have a Xamarin.Forms app on Android, iOS, and UWP that's already published to all relevant app stores. It's written in C#, but a new feature was recently implemented partly in F#. This means I can't use .NET Native compilation on my UWP project. I turned off .NET Native compilation, but discovered that I now can't publish updates to Windows Store any longer.

Is there any way around this, or is it simply impossible for the time being to publish Xamarin.Forms apps using F# to the Windows Store? I know there's something called Desktop bridge, but I have no idea if this is usable in this context.

If it's currently impossible to publish XF apps using F# to Windows Store, is there any estimate on when this will be possible?

(cross-posted on the Xamarin Forums)

It is possible to use .net native with F# UWP but, it is not officially supported.

We can confirm that .Net Native compilation works now on Store compilation machines, and we have released our beta F# app on the store (link).

Screencap for posterity (should the link change) 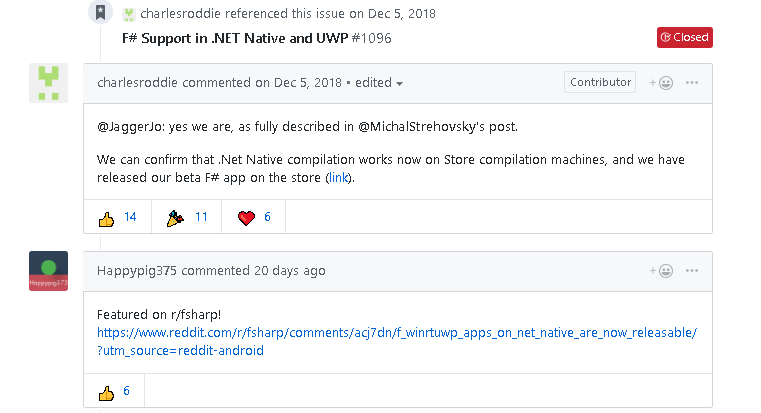 At this time [Sep 29 '17] it appears that .NET Native, the technology used to pre-compile UWP apps, as I understand it, still does not support F#.

Here's the GH issue on this, with a linked work-around for publishing Win32 and .NET apps--but I suspect if you want a UWP app, no such luck: https://github.com/Microsoft/visualfsharp/issues/1096

Not the answer you're looking for? Browse other questions tagged f# xamarin.forms uwp windows-store or ask your own question.

19
Is it possible to use F# with the new Windows Universal apps?
0
Does Windows Store accept appxbundle for a UWP Application?
2
Can we publish a WORD Add-In to the Windows 10 app store?
1
How to publish Xamarin UWP apps to windows store using VS2015?
1
Desktop Bridge requires .net native tool chain, but how to use it in a runtime component
0
What to do if I can't make my app compatible for the Windows Store?
5
Properly package a Desktop Bridge UWP App with a Win32 App
1
CodenameOne UWP app submission to Windows store error