visNetwork with R: How to prevent nodes from overlapping with edges

I am using visNetwork (for its dynamic visualizations) to visualize a bipartite graph with 47 nodes. 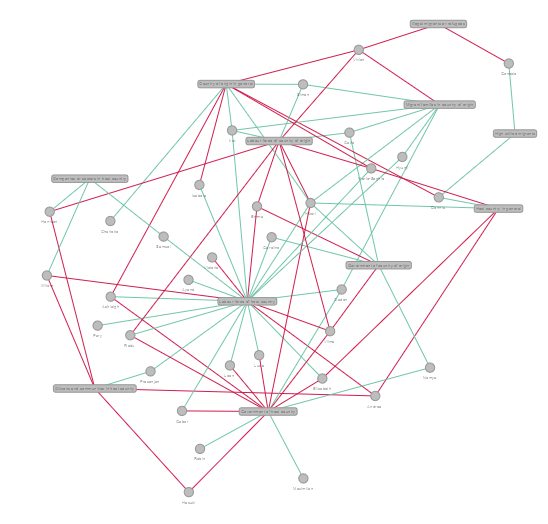 The image above is what it looks like currently and it's the best we could come up with after trying a few layouts (Fruchterman Reingold etc). The problem I have with this is that the edges tend to be so long, so some node pairs are very far apart. Can anyone suggest a layout that prevents nodes from overlapping with edges?

The size of your dataset suggests that it may be acceptable to rely on visNetwork to compute the layout coordinates, rather than igraph via visIgraphLayout:

For comparison, the same data plotted with igraph:

Not the answer you're looking for? Browse other questions tagged r visnetwork or ask your own question.

905
How do I replace NA values with zeros in an R dataframe?
29
Which layout should I use to get non-overlapping edges in igraph?
62
How to visualize a large network in R?
2
After clustering in R (iGraph, etc), can you maintain nodes+edges from a cluster to do individual cluster analysis?
0
Display Edge Label only when Hovering Over it with Cursor - VisNetwork Igraph
1
creating nodes and edges tables for visNetwork
0
How to control outlier nodes for network layout algorithms?