How can I get the intersection points of lines down using opencv Hough lines algorithm? 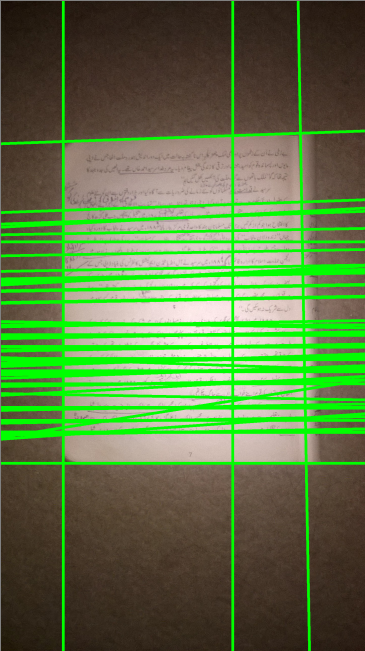 I want to get all the points of intersection.

With HoughLines, you already have the result as rho, theta so you can easily segment into two classes of angle with theta. You can use for e.g. cv2.kmeans() with theta as your data you want to split.

I have answered a similar question before with some python code that you can check out; note this was using HoughLinesP which gives you only line segments.

You didn't provide your original image so I can't use that. Instead I'll use the standard sudoku image used by OpenCV on their Hough transform and thresholding tutorials: 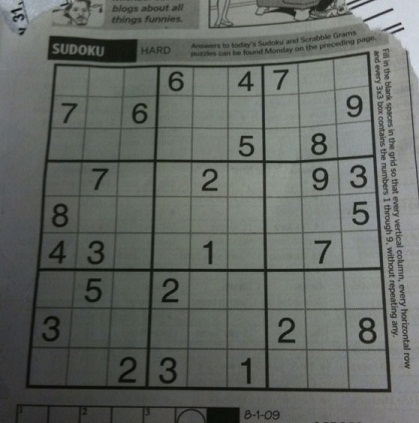 First, we'll just read this image and binarize it using adaptive thresholding like what's used in this OpenCV tutorial: 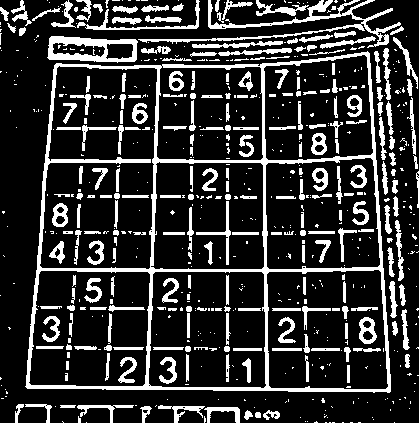 Then we'll find the Hough lines with cv2.HoughLines(): 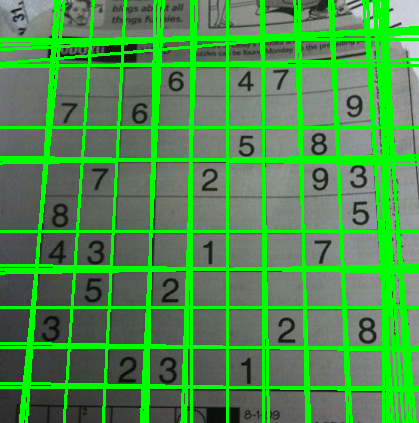 Now, if we want to find the intersections, really we want to find the intersections only of the perpendicular lines. We don't want the intersections of mostly parallel lines. So we need to segment our lines. In this particular example you could easily just check whether the line is horizontal or vertical based on a simple test; the vertical lines will have a theta of around 0 or around 180; the horizontal lines will have a theta of around 90. However, if you want to segment them based on an arbitrary number of angles, automatically, without you defining those angles, I think the best idea is to use cv2.kmeans().

There is one tricky thing to get right. HoughLines returns lines in rho, theta form (Hesse normal form), and the theta returned is between 0 and 180 degrees, and lines around 180 and 0 degrees are similar (they are both close to horizontal lines), so we need some way to get this periodicity in kmeans.

If we plot the angle on the unit circle, but multiply the angle by two, then the angles originally around 180 degrees will become close to 360 degrees and thus will have x, y values on the unit circle near the same for angles at 0. So we can get some nice "closeness" here by plotting 2*angle with the coordinates on the unit circle. Then we can run cv2.kmeans() on those points, and segment automatically with however many pieces we want.

So let's build a function to do the segmentation:

Now to use it, we can simply call:

What's nice is here we can specify an arbitrary number of groups by specifying the optional argument k (by default, k = 2 so I didn't specify it here).

If we plot the lines from each group with a different color: 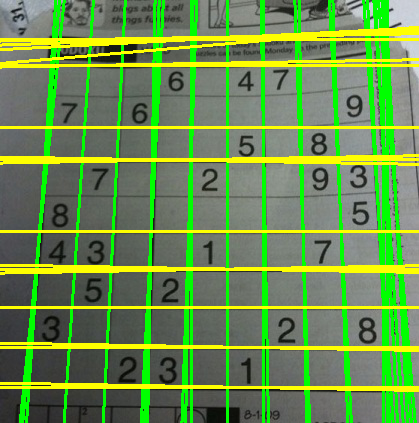 Then to use it, it's simply:

And plotting all the intersections, we get: 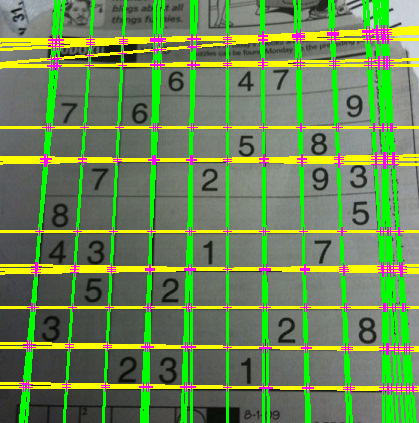 As mentioned above, this code can segment lines into more than two groups of angles as well. Here's it running on a hand drawn triangle, and calculating the intersection points of the detected lines with k=3: 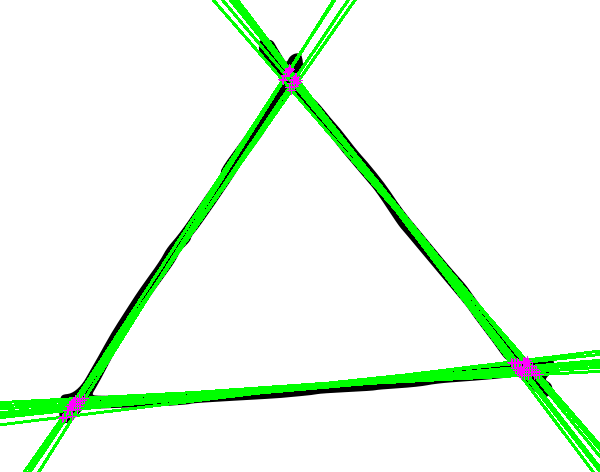 If you already have the line segment, just substitute them in a line equation ...

u can be found by using any of the following ...

First of all, you need to refine the output of Hough transform (I usually do this by k-means clustering based on some criteria, e.g. slope and/or centroids of segments). In your problem, for instance, it seems like the slope for all the lines is usually in the vicinity of 0, 180, 90 degrees so you can do clustering on this basis.

Next, there are two different ways you can get the intersecting points(which are technically the same):

P.S. Shapely is a wrapper around a powerful C++ geometry library but SymPy is pure Python. You may want to consider this in case your application is time critical.

Here I have processed my image with some methods;

We will be getting values of 'rho' and 'theta', What I am doing is here creating two empty list one for vertical lines one for the horizontal lines,and appending the values of both lines in respective list.

Here is the logic for vertical and horizontal lines.

Now the important part is here, When every line passing through and intersecting one another it is intersecting that line on a particular pixel value. And we have that pixel value in terms of 'rho'.

Now lets create tuples to pass as a co-ordinate into 'cv2' function i.e. in the form of (x,y).

Thats It!! Now here the images before and after.

It uses the solution from alkasm in this thread, which was incomplete. Also the returned value from HoughLines() and the syntax for kmeans() has changed from OpenCV 2.x to 3.x

Result 1: A piece of paper on a desk
https://i.ibb.co/VBSY7V7/paper-on-desk-intersection-points.jpg
This answers the original question, however using k-means clustering with k = 2,3,4 does not segment the piece of paper. You would need a different approach to find the corners of the paper
e.g. filtering for parallel lines. 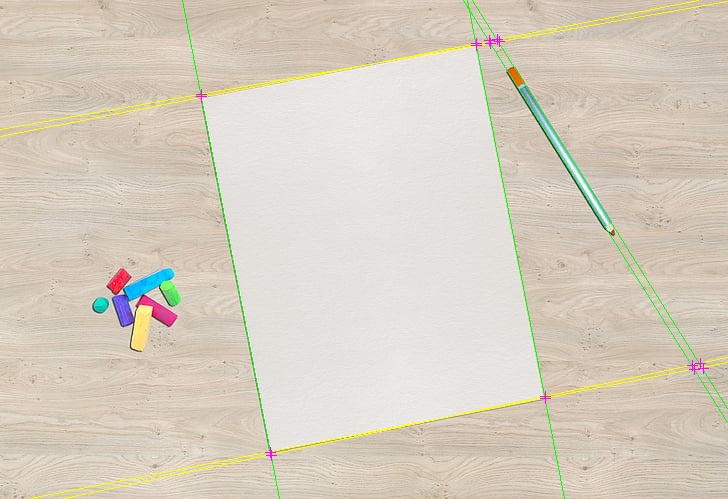 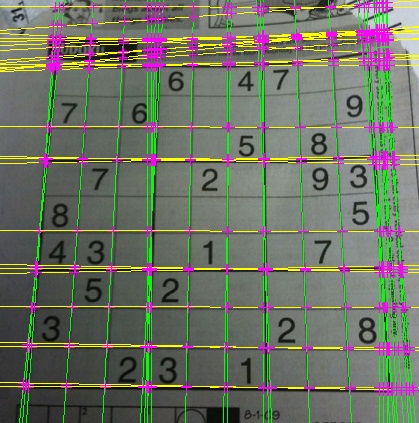 Not the answer you're looking for? Browse other questions tagged python opencv numpy hough-transform or ask your own question.

474
Find intersection of two nested lists?
0
How to get coordinates of end points in Cartesian coordinate system and the corresponding (rho,theta) in polar coordinate system of line segment
2
Highlight lines found by hough transform - OPENCV
2
OpenCV: how to detect lines of a specific colour?
0
opencv stereo camera calibration
6
rectangle document detection using hough transform opencv android
0
I am getting an error for a basic opencv code to load and show a image