Cannot start MongoDB as a service

I have been developing for MongoDB for some months now and would like to install it as a service on my Windows 7 Enterprise machine. The following is the command that I have executed to create the service:

However, whenever I use net start "MongoDB" or the Service Control Panel I receive the following error:

Error 1053: The service did not respond to the start or control request in a timely fashion.

Have your checked you logging to see the real problem?

I suggest extracting the Mongo installation to c:\mongodb.

Then browse the the c:\mongodb\bin directory and run the following to remove the service (if you've installed it!):

Then install the service, specifying the log and data directories:

Then if there is a problem starting the service you should see the reason in the specified log file.

If you did not specify absolute file paths for the data directory, or the log directory, you will get the same Windows error, but no log file.

I used the information from "Install MongoDB Service on Windows 7", pushed on Webiyo to correct the registered service arguments:

I just encountered the same issue on my windows 7 machine. I followed the directions in MongoDBs Docs for the install, but it wouldn't let me execute "net start MongoDB" unless I was in "C:\". I didn't want to go back and reinstall MongoDB to follow the instructions included in the Webiyo link referenced above though. If you already installed MongoDB according to their docs and want to be able to execute "net start MongoDB" from where ever your project directory is:

Paste in the following ImagePath ( edit the folder directory and names to match your needs ):

Note that if you direct copy this ImagePath value and your "data" folder is in the mongodb directory instead of C:\ add the following line to your "mongod.cfg" file: dbpath=C:\mongodb\data\db

After I did this, when I run "net stop MongoDB" I get the message "System error 109 has occurred. The pipe has been ended." You may see it as well. This message has been discussed thoroughly at jira.mongodb.org.

To save you the time of reading the whole back and forth discussion, Tad Marshalls post sums up this issue:

"... it was working fine in 2.1.0; later changes broke it again. But yes, you get this error message in the current code.

The explanation is that mongod.exe is exiting from a callback thread created by the Windows Service Control Manager when it calls us due to "net stop mongodb" and this breaks the RPC pipe it used to create the callback thread. We need to reorganize our exit logic to avoid doing this.

The error message is the only real effect of this issue; we exit on command, cleanly, and inform the Windows Service Control Manager that we are stopped, but then the "net" command displays an error message because we didn't return from the RPC call the way it expected us to."

My mongod.cfg file had the following last two lines:

I have no idea why there's an mp: in there. But when I manually executed the image path

So I commented it out and then the service started without any problem.

3.Inside your data folder create your db folder

I ran this command:

And got this message:

The service is not responding to the control function. More help is available by typing NET HELPMSG 2186.

After some trials and errors, I noticed when following the tutorial it asked me to name my file mongod.conf but the command was trying to refer to mongod.cfg.

As soon as I corrected that name and re-run the commands,

To others who may have the same problem on Windows Server 2012:

I have just got the same problem with Mongo 3.0.3 on Windows Server 2012. I am not a system admin so I don't know what they have changed for sc.exe. I have to use

This is without the \"\" for both binary and config file paths comparing to the one on their website.

For mongoDB 3.0, You will have to set the following in the config file.

the logpath should end with a file and not a folder.

Check if your mongod.cfg file has tabs in it. Removing tabs solved it for me!

Make sure you have these folders:

Then all you need are these commands:

Another way this might fail is if the account running the service doesn't have write permission into the data directory.

In that case the service will be unable to create a lock file.

The mongod service behaves badly in this situation and goes into a loop starting a process, which immediately throws an unhandled exception, crashes, etc. the log file gets recreated every time the process starts up, so you have to grab it quick if you want to see the error.

the default user for windows services would be localhost\system. so the fix is to ensure this user can write into your db directory, or start the service as another user who can.

For version 2.6 at least, you must create the /data/db/ and /log/ folders that the mongo.cfg points to. MongoDB won't do so itself, and will throw that error in response when ran as a service.

After spend half an hour on debug ... I finally found that there is single dash before the "rest" attribute. 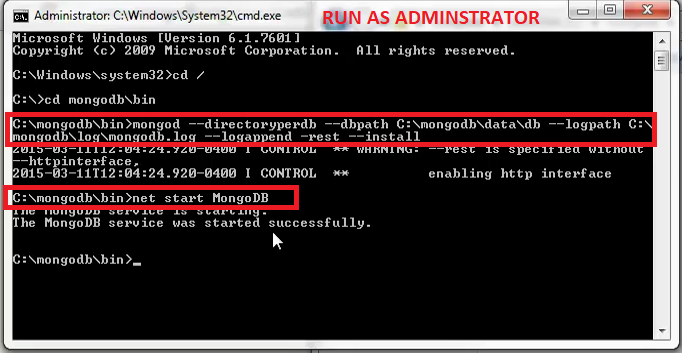 Just try to run mongod.exe locally in command line, you can get here exception, that mongod calls and try to solve it. In my case it was small free space on local disc, so I just change location of directories and change Mongocofig file and now it run ok.

If you look in the service details, you can see that the command to start the service is something like:

The MongoDB team forgot to add the " around the --config option. So just edit the registry to correct it and it will work.

I had same issue on windows 8.1

Going to HKEY_LOCAL_MACHINE > SYSTEM > CurrentControlSet > services > MongoDB > imagePath the value was like the following:

Then just I corrected config file path to match my actual path:

Remember to create the database before starting the service

Then you can stop the process Control-C

Check if a process instance of mongod is already running. If yes, this service will not start because C:\data\db\mongod.lock will be used by it.

And to start MongoDB as a service, this file shall be not used by any process.

For me, the issue was the wrong directory. Make sure you copy paste the directory from your file explorer and not assume the directory specified on the docs page correct.

If you receive the error:

the service name is invalid

when running net start mongodb, you will need to run the following command from Step 4 of Manually Create a Windows Service for MongoDB Community Editition:

I had made few changes in the Config start-up file, which caused this issue. When I looked in the "mongo.log" file, it said

Resetting the storage engine back to 'wiredTiger' resolved the issue for me. Hope this helps others.

I started following a tutorial on a blog that required MongoDB. It had instructions on downloading and configuring the service. But for some reason the command for starting the Windows service in that tutorial wasn’t working. So I went to the MongoDB docs and tried running this command as listed in the mongodb.org-

I got this message: [SC] CreateService SUCCESS

Then I ran this one: net start MongoDB

And got this message:

I create a file named 'mongod.cfg' in the 'C:\MongoDB\bin\mongodb\' As soon as I added that file and re-ran the command- 'net start MongoDB', the service started running fine.

Well, in my case, I was running low disk space on my drive where I have my MongoDB data files. I checked MongoDB logs file which stated the following

All I had to do is clean up some space and fire up the service again.. Worked for me. So All you have to is check your logs file and deal with the problem accordingly.

Not the answer you're looking for? Browse other questions tagged mongodb windows-services or ask your own question.

1
User-defined windows service does not start - 1053 error
1562
How to query MongoDB with “like”?
0
mongodb: … is not a valid Win32 application
871
How do I drop a MongoDB database from the command line?
18
Can't start Windows service written in Python (win32serviceutil)
13
mongodb can't start on windows?
0
MongoDB 2.6 legacy won't start as Windows Service
1
Service is not starting in Windows
0
Cannot start MongoDB as a service after adding ips to bind_ip in mongod.cfg