Is it necessary to store the personal access token somewhere locally on the machine after generating it in GitHub?

If yes, is there any preferred way where it could be stored?

Half the point of passwords is that (ideally) you memorize them and the system hashes them, so therefore they're never stored anywhere in plain text.
Yet GitHub's personal access token system seems to basically force you to store the token in plain text?

That differs from your password, which is unique to your account, and cannot be easily changed without having to also modify it everywhere you happen to use it.

Since a PAT can be used in place of a password when performing Git operations over HTTPS with Git on the command line or the API, you can use a git credential helper to cache it securely.
On Windows, for instance, that would use the Windows Credential Manager, through the GCM -- Git Credential Manager -- for Windows, Mac or Linux:

The first time you are pushing to a repo, a popup will ask for your credentials: username and your PAT.
The next time, it won't ask, and reuse directly that PAT, which remains stored securely in your Credential Manager.

A similar idea applies for Mac with the OSX keychain, and Linux with the GNOME Keyring (in 2021, it would need a DBus session and libsecret), but in 2021, GCM-Core covers those use cases.
The idea remains: store the PAT in an encrypted credentials store.

As mentioned above, the more modern solution (Q4 2020) is Microsoft Git-Credential-Manager-Core

You need for that to install git-credential-manager-core, downloading its latest release, like gcmcore-linux_amd64.2.0.474.41365.deb

Although, with GCM (Git-Credential-Manager-Core) on Linux, as noted by Mekky Mayata in the comments, you need to define a git config --global credential.credentialStore first.

There are four options for storing credentials that Git Credential Manager (GCM) manages on Linux platforms:

By default, GCM comes not configured.
You can select which credential store to use by setting the GCM_CREDENTIAL_STORE environment variable, or the credential.credentialStore Git configuration setting.

As noted by agent18 in the comments, using git-credential-libsecret after installing libsecret-1-0 and libsecret-1-dev is a good first step.
But, again, that should be now wrapped by credential-manager-core.

In my case, in Ubuntu, the accepted solution didn't work with a message like

git: 'credential-manager' is not a git command

but store instead of manager worked well:

Alternatively, you can create a ~/.netrc file in home directory and save your login credentials to it.

This allows to store the password/personal access token in an encrypted format. The git config file can be found in the .git/config file in your loca repo as shown here, if you ever need it.

P.S. There are many places that suggest the use of Gnome-keyring but that is apparently deprecated.

This becomes tricky and it appears as @VonC suggests that we need a Git-Credential-Manager core (GCM core). This answer is enhanced based on my findings in this answer.

Your ~/.gitconfig file will thus have the following :

To store your credentials in cache and avoid logging in every time you perform a git action, follow these steps:

I like to keep them encrypted within the repository and load them using .envrc (https://direnv.net/)

For doing this I use ssh-vault to encrypt the data using my ssh keys that GitHub already is exposing, for example:

This will decrypt the data in my-encrypted-vars.ssh file and set MY_TOKEN into my environment variables every time I cd into the project dir.

try enabling this to help with persisting across push / pulls 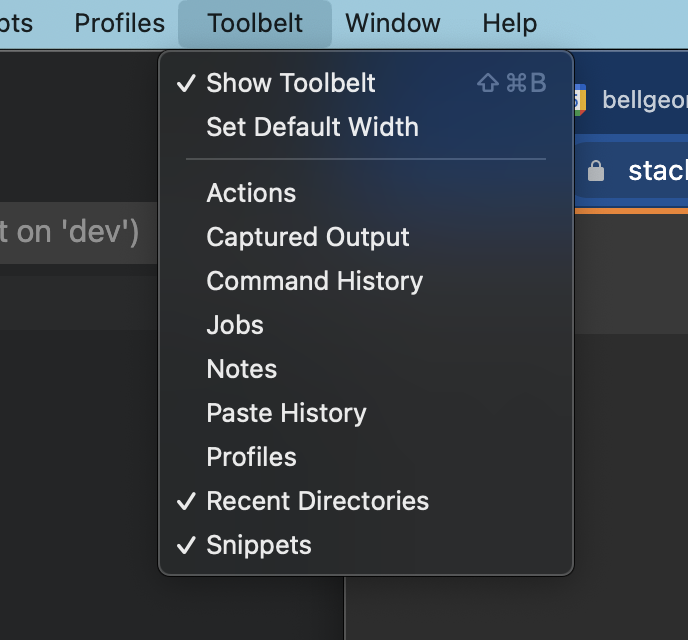 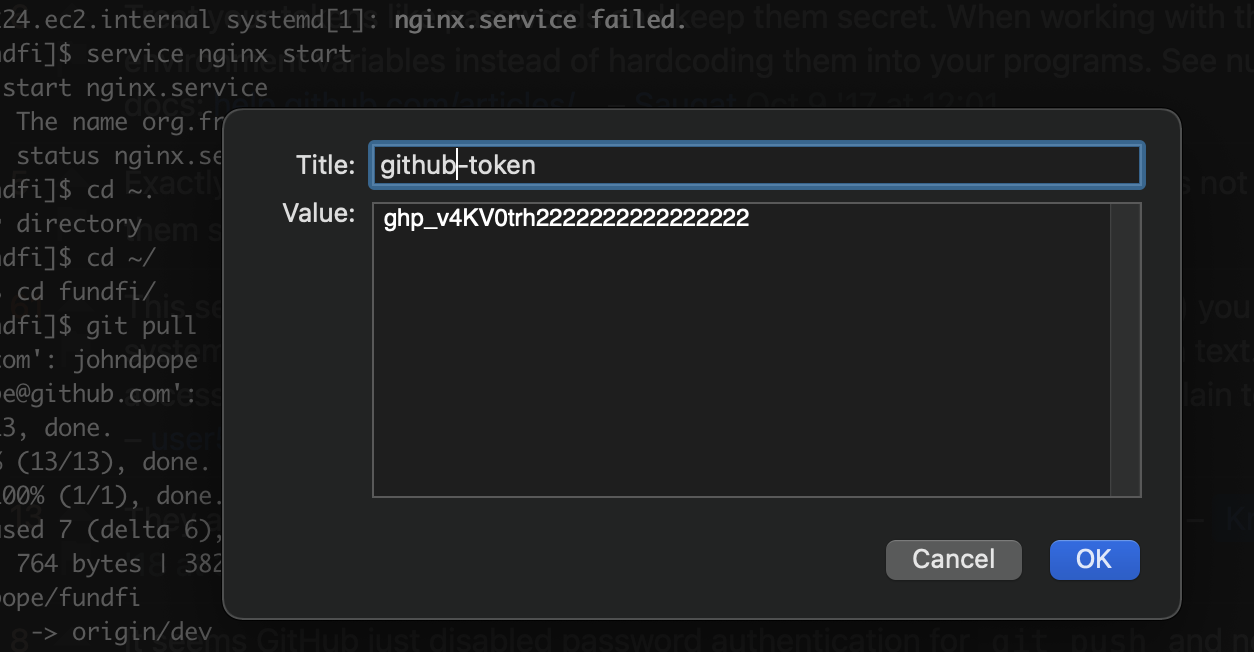 Just click the snippet whenever you need it. P.S. you are using oh-my-zsh, aren't you? https://github.com/ohmyzsh/ohmyzsh

You can cache your credentials for a defined time using:

This is not a permanent store and as per other comments credentials should not be stored in plain text, which is a security risk. I use a password manager (https://bitwarden.com/) to store the PAT (Personal Access Token) then copy it in for the first use, where it is then cached. A PAT is required if you enable 2FA on your Github account.

Well, you have to save the token somewhere, when you don't want to type it each time your app asks for it :-)

A good solution is using environment variables, as already suggested in one comment.

But you still have to set the environment variable somewhere.
On Windows (which I'm using), you could use the dialog box in the system settings (I don't know if other operating systems have something similar).

I don't do this, I prefer a script in my project.
In a private project, you may commit this to source control, but this is a matter of preference.

In one of my personal projects, I'm calling the GitHub API as well, using a personal access token.
It's a command line app and the end user will save the token in a config file (which is OK).

But I need the token for development as well, because the project has integration tests where I'm calling the GitHub API.

And that project is public on GitHub, so I couldn't save the token in source control.

What I did is this:

So I can just rename this file to environment-variables.bat, replace the fake password by the real one, and everything works.

This is not the perfect solution for all cases, though.

In my project, I have the problem that I need to use more tokens/passwords for more APIs in the future.

So the number of tokens in my environment-variables.bat will increase, making it difficult for potential contributors to actually execute all integration tests. And I still don't know how to deal with that.

In my use case, I store the PAT in a password manager, e.g. LastPass, KeePass, 1Password. When I need it in a Linux environment ( e.g. Docker ), I save the PAT in an environment variable and then use git's credential helper setting. For example:

With a PAT the username can be anything except blank. Here's a gist that elaborates:

Basically I did this on my machine:

My profile script is slightly different than described:

You can store the github https token using pass.

Two alternatives to map a git host to a pass entry:

Change your_username and token_github.com the way you set it up with pass insert.

This adds the token to pass without typing or pasting twice:

pass-git-helper needs an ini-file to map between the git request and the pass entry. ${XDG_CONFIG_HOME}/pass-git-helper/git-pass-mapping.ini example:

Not the answer you're looking for? Browse other questions tagged git access-token or ask your own question.

1
How do I set up my local Git repo to use the new personal access token I just created?
0
Bash script to run git commands and automatically enter my username and password
145
How to use git with gnome-keyring integration
181
Git - How to use .netrc file on Windows to save user and password
54
How to add a GitHub personal access token to Visual Studio Code
21
Configure Git clients, like GitHub for Windows, to not ask for authentication
17
Supplying a password to Git in a Bash script
11
remote: Write access to repository not granted. fatal: unable to access
6
bash script adding git credentials from bash script
7
Github, create issue on repository without requiring a github user account
See more linked questions