I have project that I need to display a leaderboard of the top 20, and if the user not in the leaderboard they will appear in the 21st place with their current ranking.

Is there efficient way to this?

I am using Cloud Firestore as a database. I believe it was mistake to choose it instead of MongoDB but I am in the middle of the project so I must do it with Cloud Firestore.

The app will be use by 30K users. Is there any way to do it without getting all the 30k users?

This is code I did to get the top 20 but what will be the best practice for getting current logged in user rank if they are not in the top 20?

Finding an arbitrary player's rank in leaderboard, in a manner that scales is a common hard problem with databases.

There are a few factors that will drive the solution you'll need to pick, such as:

The typical simplistic approach is to count all players with a higher score, eg SELECT count(id) FROM players WHERE score > {playerScore}.

This method works at low scale, but as your player base grows, it quickly becomes both slow and resource expensive (both in MongoDB and Cloud Firestore).

Cloud Firestore doesn't natively support count as it's a non-scalable operation. You'll need to implement it on the client-side by simply counting the returned documents. Alternatively, you could use Cloud Functions for Firebase to do the aggregation on the server-side to avoid the extra bandwidth of returning documents.

Rather than giving them a live ranking, change it to only updating every so often, such as every hour. For example, if you look at Stack Overflow's rankings, they are only updated daily.

For this approach, you could schedule a function, or schedule App Engine if it takes longer than 540 seconds to run. The function would write out the player list as in a ladder collection with a new rank field populated with the players rank. When a player views the ladder now, you can easily get the top X + the players own rank in O(X) time.

Better yet, you could further optimize and explicitly write out the top X as a single document as well, so to retrieve the ladder you only need to read 2 documents, top-X & player, saving on money and making it faster.

This approach would really work for any number of players and any write rate since it's done out of band. You might need to adjust the frequency though as you grow depending on your willingness to pay. 30K players each hour would be $0.072 per hour($1.73 per day) unless you did optimizations (e.g, ignore all 0 score players since you know they are tied last).

Using a separate collection called 'scores', you have a document for each individual score (non-existent if no-one has that score) with a field called player_count.

Finding out a player's exact rank is as easy as something like SELECT sum(player_count)+1 FROM scores WHERE score > {playerScore}.

Since Cloud Firestore doesn't support sum(), you'd do the above but sum on the client side. The +1 is because the sum is the number of players above you, so adding 1 gives you that player's rank.

Using this approach, you'll need to read a maximum of 999 documents, averaging 500ish to get a players rank, although in practice this will be less if you delete scores that have zero players.

Write rate of new scores is important to understand as you'll only be able to update an individual score once every 2 seconds* on average, which for a perfectly distributed score range from 0-999 would mean 500 new scores/second**. You can increase this by using distributed counters for each score.

* Only 1 new score per 2 seconds since each score generates 2 writes
** Assuming average game time of 2 minute, 500 new scores/second could support 60000 concurrent players without distributed counters. If you're using a "Highest score is your current score" this will be much higher in practice.

You can follow this related article for 'Fast and Reliable Ranking in Datastore' on a general approach that is applicable. For this approach, you'll want to have a bounded score (it's possible with unbounded, but will require changes from the below).

I wouldn't recommend this approach as you'll need to do distributed counters for the top level nodes for any ladder with semi-frequent updates, which would likely negate the read-time benefits. 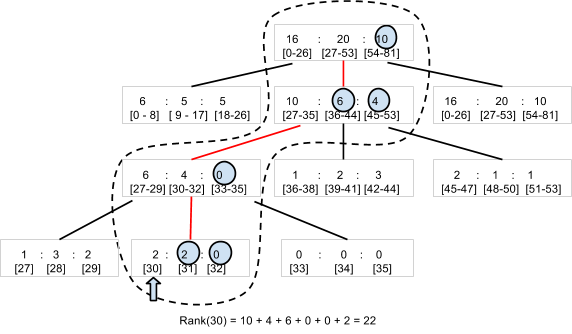 Depending on how often you display the leaderboard for players, you could combine approaches to optimize this a lot more.

Combining 'Inverted Index' with 'Periodic Update' at a shorter time frame can give you O(1) ranking access for all players.

As long as over all players the leaderboard is viewed > 4 times over the duration of the 'Periodic Update' you'll save money and have a faster leaderboard.

Essentially each period, say 5-15 minutes you read all documents from scores in descending order. Using this, keep a running total of players_count. Re-write each score into a new collection called scores_ranking with a new field players_above. This new field contains the running total excluding the current scores player_count.

To get a player's rank, all you need to do now is read the document of the player's score from score_ranking -> Their rank is players_above + 1.

One solution not mentioned here which I'm about to implement in my online game and may be usable in your use case, is to estimate the user's rank if they're not in any visible leaderboard because frankly the user isn't going to know (or care?) whether they're ranked 22,882nd or 22,838th.

If 20th place has a score of 250 points and there are 32,000 players total, then each point below 250 is worth on average 127 places, though you may want to use some sort of curve so as they move up a point toward bottom of the visible leaderboard they don't jump exactly 127 places each time - most of the jumps in rank should be closer to zero points.

It's up to you whether you want to identify this estimated ranking as an estimation or not, and you could add some a random salt to the number so it looks authentic:

I'll be doing the latter.

Alternative perspective - NoSQL and document stores make this type of task overly complex. If you used Postgres this is pretty simple using a count function. Firebase is tempting because it's easy to get going with but use cases like this are when relational databases shine. Supabase is worth a look https://supabase.io/ similar to firebase so you can get going quickly with a backend but its opensource and built on Postgres so you get a relational database.

A solution that hasn't been mentioned by Dan is the use of security rules combined with Google Cloud Functions.

This looks to me the easiest option. It is realtime as well.

To solve the problem of having a leaderboards with user and points, and to know your position in this leaderboards in an less problematic way, I have this solution: 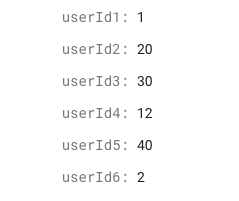 In my case, I have a document perMission that has for each user a field, with the userId as property and the respective leaderboard points as value.

It will be easier to update the values inside my Javascript code. For example, whenever an user completed a mission (update it's points):

The increment value can be as you want. In my case I run this code every time the user completes a mission, increasing the value.

2) To get the position inside the leaderboards

Here you can also use the object to get all the users and its respective points, ordered. But here I am not doing this, I am only interested in my position.

The code is commented explaining each block.

You can now use your position, even if the array is super big, the logic is running in the client side. So be careful with that. You can also improve the client side code, to reduce the array, limit it, etc.

But be aware that you should do the rest of the code in your client side, and not Firebase side.

This answer is mainly to show you how to store and use the database in a "good way".

You could do something with cloud storage. So manually have a file that has all the users' scores (in order), and then you just read that file and find the position of the score in that file.

Then to write to the file, you could set up a CRON job to periodically add all documents with a flag isWrittenToFile false, add them all to the file (and mark them as true). That way you won't eat up your writes. And reading a file every time the user wants to view their position is probably not that intensive. It could be done from a cloud function.

Not the answer you're looking for? Browse other questions tagged javascript database firebase angularfire2 google-cloud-firestore or ask your own question.

2
Get positioning in order of a document in Firestore
0
Best way to get rank of a user rating with firestore?
0
Firebase database Retrieve high score rank of a user
10
How to store a sorted list in Google Firestore
3
Creating a leaderboard scenario on Cloud Firestore
1
Get statistics from firebase documents
0
How to get the position of an item in the realtime database
0
Unity - Firebase realtime database - Get my rank in leaderboard
1
In Flutter, how do we pull a document from a queue at a certain index?
1
Best NoSQL server structure for a large array which can reordered
See more linked questions