Why is Razor Pages the recommended approach to create a Web UI in Asp.net Core?

Razor Pages is the recommended approach to create a Web UI with ASP.NET Core

Any directions are welcome.

From this article in Microsoft docs:

Razor Pages addresses this issue by encapsulating the server-side logic for a given logical “page” in a web application. A Razor Page that has no server-side logic can simply consist of a Razor file (eg. “Index.cshtml”). However, most non-trivial Razor Pages will have an associated page model class, which by convention is named the same as the Razor file with a “.cs” extension (for example, “Index.cshtml.cs”). This page model class combines the responsibilities of a Controller and a ViewModel. Instead of handling requests with controller action methods, page model handlers like “OnGet()” are executed, rendering their associated page by default.

Razor pages simplify the process of building individual pages in an ASP.NET Core app, while still providing all the architectural features of ASP.NET Core MVC. They are a good default choice for new page-based functionality.

When to use MVC:

If you’re building web APIs, the MVC pattern makes more sense than trying to use Razor Pages. If your project will only expose web API endpoints, you should ideally start from the Web API project template, but otherwise it’s easy to add controllers and associated API endpoints to any ASP.NET Core app. You should also use the view-based MVC approach if you’re migrating an existing application from ASP.NET MVC 5 or earlier to ASP.NET Core MVC and you want to do so with the least amount of effort. Once you’ve made the initial migration, you can evaluate whether it makes sense to adopt Razor Pages for new features or even as a wholesale migration.

Note: Whether you choose to build your web app using Razor Pages or MVC views, your app will have similar performance and will include support for dependency injection, filters, model binding, validation, etc.

Update: Some more reasons i read on this github issue commented by scott sauber:

We're using Razor Pages for a [complex] Health Insurance portal... We have 60+ pages and I can say that for Server-rendered HTML, I will never go back to MVC. It's also not just for simple things. The Health Insurance domain is inherently complex and combine this with the fact that it's a multi-tenant app (we sell the product to other insurance companies), which adds more complexity as the app is highly configurable as different insurance companies do things a bit differently.

I think that's the big stuff.

This is about some complexity of MVC pattern, does not directly answer the question but can be useful: An Engineering Manager at Facebook, said (here) for their “sufficiently” large codebase and large organization, “MVC got really complicated really quickly,” concluding that MVC does not scale. The complexity of the system went exponential every time they attempted to add a new feature making the code “fragile and unpredictable.” This was becoming a serious problem for developers new to a certain codebase because they were afraid to touch the code lest they might break something. The result was MVC was falling apart for Facebook. 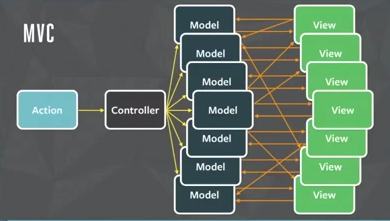 Razor Pages are optimized for page-based workflows and can be used in these scenarios with fewer moving parts than traditional MVC models. This is because you don't need to deal with Controllers, Actions, Routes, ViewModels, and Views (as you typically would). Instead your route is convention-based, and your PageModel serves as your Controller, Action(s), and ViewModel all in one. The page, of course, replaces the View. You also don't have to have as many folders as you would in MVC, further simplifying your project.

That article has more information on why to use Razor Pages over MVC for page-based workflows. Obviously, for APIs, you will still want to use Controllers.

ASP.NET Core - Feature Slices for ASP.NET Core MVC, an older MSDN article from Sept. 2016, describes why the classical MVC convention to organize views and controller might have disadvantages for larger projects. The article gives an example of four loosely related application concepts: Ninjas, Plants, Pirates and Zombies. The article outlines a way to structure them outside of the default folder convention by organizing files into folders by feature or area of responsibility.

Microsoft is coming back to the WebForms approach to simplify the project structure trusting in the "Convention over configuration" mantra, while hiding the configuration from developer to make things faster. But it has the disavantage that everything will be mixed again. It doesn't look like a smart move for organizing. But... Hey! Something new must catch the attention of the dev towards Microsoft.

If your page uses an MVC Web API for the REStful, it's really more easy to just use Razor pages. If not, I would recommend you to use Core MVC.

In huge projects, where the model and controller are together in the same file, maintenance will be a nightmare. It works well for clases that are just 2 properties long, but it violates the Open Close Principle of OOP. You should design and use an architecture that can grow with time (Extensible) and still be stable and logic(No reestructuring the project), just extend it using the same pattern.

As a Software Architect I use design patterns automatically. What I like a lot is the Facade design pattern. You hide everything related to Home behind a HomeController and you can do the same with Repositories.

Want to know a funny thing? A tour guide explained where the name Facade comes from. In Amsterdam you have big houses across the waters. From the outside they look luxureous. But from the behind they can be messy. The facade of the house hides whats behind it. Design patterns comes from the building world. Well whats behind in my applications also looks good but it was nice to know from the tour guide about the explanation.

A Controller has two things a Razor Pages does not have:

What is the Razor pages way of handling this: Use of directories I think:

Question: For a simple Home that would be enough. But lets say we have an XController that uses for all actions the same Repository. You could initialize that Repository in the Initializer function of the XController. But for pages in the X subdirectory you would have to do that for all X actions again. Is that DRY?

Question: If you look at my fix you can see I use directories to solve the Share and Grouping problem of Razor pages.

How would you do this?

or...are Razor pages just meant to be for simple websites, could this be the conclusion for this version of Razor pages.

Blazor server has a strange architecture. It looks like a chat application by use of SignalR. My experience with applications like that is that events can get lost. I don't want to lose events, better is they are stacked and guaranteed to be processed like mail.

Developers were on forums in 2013 asking "What does Microsoft mean, Silverlight is not the recommended ...???" Only this time, it is that MVC is going to be pronounced dead and long live MVVM. And you can likely expect MVC to be thrown to the scrap heap, slowly, but sped up in about 18 months from now, and any and all time you spent learning MVC will go to that same scrap heap. Also, MVVM looks easy but it takes a year to get the hang of it and really do it right.