What does “Git push non-fast-forward updates were rejected” mean?

I'm using Git to manage my two computers and my development. I'm trying to commit changes to GitHub and I'm getting the error.

Failed to push some refs to <repo>. To prevent you from losing history, non-fast-forward updates were rejected. Merge remote changes before pushing again.

What could be causing this and how can I fix this?

Pulling the repo returns the following:

This error can be a bit overwhelming at first, do not fear.
Simply put, git cannot make the change on the remote without losing commits, so it refuses the push.
Usually this is caused by another user pushing to the same branch. You can remedy this by fetching and merging the remote branch, or using pull to perform both at once.

In other cases this error is a result of destructive changes made locally by using commands like git commit --amend or git rebase.
While you can override the remote by adding --force to the push command, you should only do so if you are absolutely certain this is what you want to do.
Force-pushes can cause issues for other users that have fetched the remote branch, and is considered bad practice. When in doubt, don’t force-push.

Git cannot make changes on the remote like a fast-forward merge, which a Visual Git Reference illustrates like: 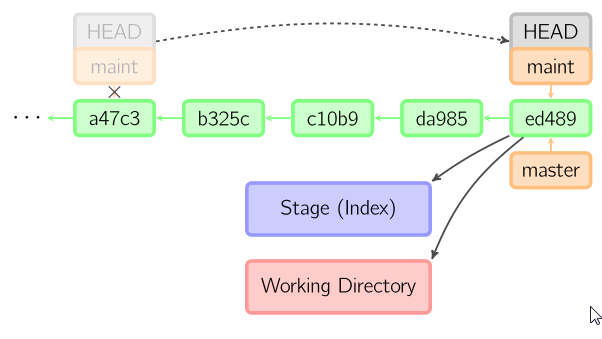 This is not exactly your case, but helps to see what "fast-forward" is (where the HEAD of a branch is simply moved to a new more recent commit).

The "branch master->master (non-fast-forward) Already-up-to-date" is usually for local branches which don't track their remote counter-part.
See for instance this SO question "git pull says up-to-date but git push rejects non-fast forward".
Or the two branches are connected, but in disagreement with their respective history:
See "Never-ending GIT story - what am I doing wrong here?"

This means that your subversion branch and your remote git master branch do not agree on something.
Some change was pushed/committed to one that is not in the other.
Fire up gitk --all, and it should give you a clue as to what went wrong - look for "forks" in the history.

It means that there have been other commits pushed to the remote repository that differ from your commits. You can usually solve this with a

Ultimately, "fast-forward" means that the commits can be applied directly on top of the working tree without requiring a merge.

A fast-forward update is where the only changes one one side are after the most recent commit on the other side, so there doesn't need to be any merging. This is saying that you need to merge your changes before you can push.

Never do a git -f to do push as it can result in later disastrous consequences.

You just need to do a git pull of your local branch.

and then do a git push

You need to merge and resolve the conflicts locally before you push your changes to remote repo/fork.

Still you have a quick choice to push forcibly by using --force option but should be avoided as it may result in changes loss or affect badly on other contributors.

970
Git workflow and rebase vs merge questions
7174
How do I force “git pull” to overwrite local files?
3936
Undo a Git merge that hasn't been pushed yet
3885
How to change the URI (URL) for a remote Git repository?
1656
Make the current Git branch a master branch
640
Why does git perform fast-forward merges by default?
2215
How do you push a tag to a remote repository using Git?
1271
How do I properly force a Git push?
1558
How can I reconcile detached HEAD with master/origin?
916
Git push rejected after feature branch rebase