got 'fatal: branch 'master' does not exist' in git

using git for a while, it's very powerful and beautiful..

but also got some confused about it:

it should under branch master after I init a git repo, isn't it?

but git branch -a, i got nothing man.
and I got fatal: branch 'master' does not exist when I try to set upstream for my branch. 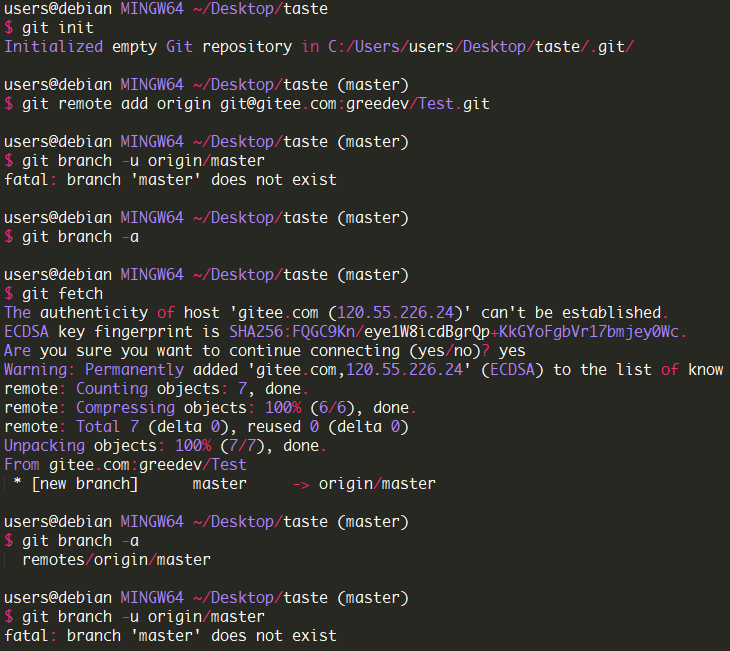 You can git checkout master at this point.

Longer description (but still not that long)

You are doing this the hard way.

In the future, instead of:

you can simply run:

since the six commands above are pretty much what git clone does.

After the first three steps—creating a new, totally-empty repository—you have a repository that is in a peculiar state: it has no commits, so it has no branches. At the same time, it does have a current branch, which is master.

In other words, the current branch is a branch that does not exist.

This state is unusual, but normal. If you run git checkout --orphan newbranch, you put your Git repository into that same state:1 on a branch that does not exist. The branch gets created once there is a commit hash to store under the branch name.

Since this last step—git checkout master when master does not actually exist yet—is the final step of git clone, git clone will also create a new branch master that tracks the remote-tracking branch origin/master.

After you run git init, the master you see is not completely created. It doesn't exist as it hasn't pointed to any commit yet. I once read that it was designed. But I think it's a puzzling bug. If you run git branch, it returns nothing.

After you run git fetch, a following git checkout master does the job. It is equivalent to: