class vs className in React 16

I saw that React 16 allows for attributes to be passed through to the DOM. So, that means 'class' can be used instead of className, right?

I'm just wondering if there are advantages to still using className over class, besides being backwards compatible with previous versions of React.

class is a keyword in javascript and JSX is an extension of javascript. That's the principal reason why React uses className instead of class.

Nothing has changed in that regard.

To expand this a bit more. A keyword means that a token has a special meaning in a language syntax. For example in:

Token class denotes that the next token is an identifier and what follows is a class declaration. See Javascript Keywords + Reserved Words.

The fact that a token is a keyword means that we cannot use it in some expressions, e.g.

One of the problems is that nobody can know whether some other problem won't arise in the future. Every programming language is still evolving and class can be actually used in some new conflicting syntax.

No such problems exist with className.

A comment by Dan Abramov on the same thread:

This was the most controversial part of the proposal. Since then, we released Hooks, which encourage writing function components. In function components, we generally suggest using destructuring for props, but you can't write { class, ... } because it would be a syntax error. So overall it's not clear that this is ergonomic enough to actually follow through with. I think it's plausible we'll revisit this in the future, or at least make class not warn and let people do what they want. But for now, we'll shelving this idea.

The React team is actually going to switch to class instead of className in the upcoming future (source):

Why switch and not support both?

If we support both without warnings, then the community will split over which one to use. Each component on npm that accepts a class prop will have to remember to forward both. If even one component in the middle doesn't play along and implements only one prop, the class gets lost — or you risk ending up with class and className at the bottom "disagreeing" with each other, with no way for React to resolve that conflict. So we think that would be worse than status quo, and want to avoid this.

So you should stay tuned.
I would still recommend using className as long as this is what the API expects.

Just to shed a little more light, on top of the other good answers already given:

You'll notice that React uses className instead of the traditional DOM class. From the docs, "Since JSX is JavaScript, identifiers such as class and for are discouraged as XML attribute names. Instead, React DOM components expect DOM property names like className and htmlFor, respectively."

Our DOM components use (mostly) the JS API so we opted to use the JS properties (node.className, not node.class).

React docs recommend on using cannonical React attribute names rather than the conventional Javascript naming, so even when React allows attributes to be passed through to DOM, it will give you a warning.

as of june 2019, the process of changing className to class has been halted, it could be continued later

Class versus className in reactJS Class is a reserved word or keyword in reactJS as much as function is in the javascript. That is why we use the word "className" to refer to the class.

There is no real explanation by React team on this but one would presume it to be differentiated from reserved keyword "class" in Javascript since its introduction in ES2015+.

Even if you use "class" in element configuration while creating element, it won't throw any compilation/rendering error.

In ReactJS, we are dealing with JSX and not HTML as you all know. The JSX wants you to use className because it is an underlying javascript DOM API! class being a reserved keyword in JS is not the primary reason why we are not using class and instead, using className. It is because we are referring to that DOM API

The problem is that the react code you see is not HTML - it is in fact JSX is an extension to javascript (basically javascript + plus a little bit more).

Q:Can we use class to represent the HTML attribute: 'class'? 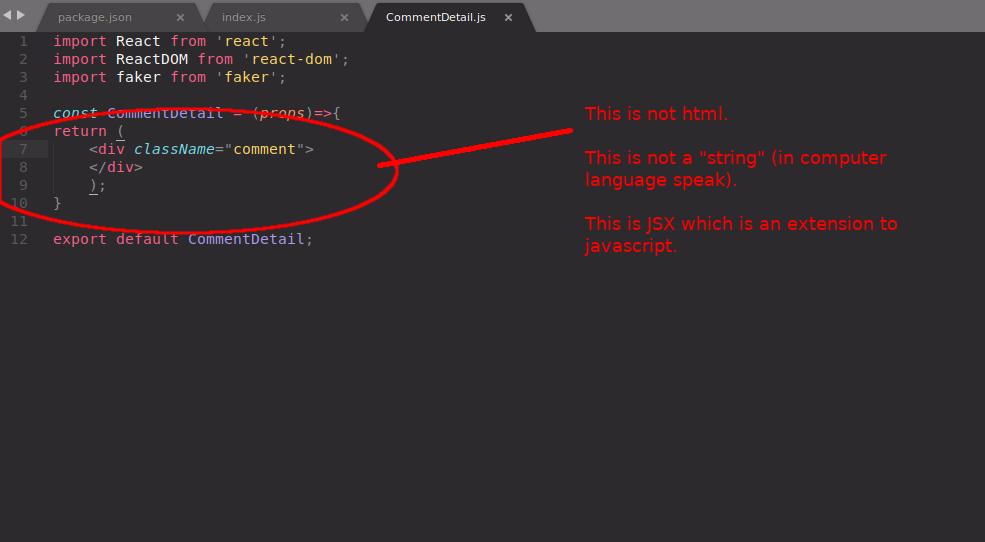 Given that it is javascript, you cannot use the word class because that is a special javascript word that is "reserved" (javascript prescribes certain words that you can and cannot use).

Given that class is a reserved word, how are you going to write classes in our "html" code jsx, because that word is a 'reserved' word and is not allowed to be used like that? The way around it is to use: "className" instead of "class", so then jsx will know that you are dealing with the html class attribute and not the javascript class keyword.

Firstly, let's think why className was used over class in the first place:

I recently watched a CSS in React conference video by Joel Denning who disagrees that className was used because class is a keyword in JavaScript. I am leaning towards agreeing with him, although I'm still not fully clear. What follows is the explanation from his video and some of my input:

Open up babel and compile the following JSX snippet:

Babel compiles this to:

See how class is treated as a string "class", so no issues with JavaScript keywords.

HTML attribute values can only be strings, whereas DOM properties can have any value. When it comes to dealing with class names I'm not sure how this is useful, but it's certainly cleaner to update DOM properties than attributes:

Also, updating a DOM property triggers a re-render which ties in nicely with the idea that the name of a class is a mutable state.

It's so confusing that React are allowing class usage alongisde className (as mentioned in the question). From https://github.com/facebook/react/issues/13525:

className → class (#4331, see also #13525 (comment) below). This has been proposed countless times. We're already allowing passing class down to the DOM node in React 16. The confusion this is creating is not worth the syntax limitations it's trying to protect against. We wouldn't do this change by itself, but combined with everything else above it makes sense. Note we can’t just allow both without warnings because this makes it very difficult for a component ecosystem to handle. Each component would need to learn to handle both correctly, and there is a risk of them conflicting. Since many components process className (for example by appending to it), it’s too error-prone.

In my opinion, there is no concrete answer to this question. I like the semantics behind using a property over an attribute to update something, but if you took me back in time to when the decision was made to use className over class I would have said it is unnecessary.

tldr; To answer your question, I would stick with className which avoids the warnings of class, and is the approach that most other React developers are familiar with so your code will be easier to read.

Not the answer you're looking for? Browse other questions tagged reactjs or ask your own question.

1
className in ReactJS, why not class?
484
What is the difference between properties and attributes in HTML?
5
What does the className attribute mean in JSX?
2
How to make React <FontAwesomeIcon/> color changed on button hover?
2
Does React DOM have to use className? Why am I not seeing any warnings?
3
“class” Attribute Works in JSX: How?
1
What is it about Vue that enables developers to use the class property on DOM elements?
0
how can I resize the Components when window size change in my NavBar?
0
Repeater with react
0
Problem: TypeError: Cannot read property 'getBoundingClientRect' of null
See more linked questions

1543
Loop inside React JSX
670
Show or hide element in React
896
React-router urls don't work when refreshing or writing manually
760
React js onClick can't pass value to method
842
Can you force a React component to rerender without calling setState?
1157
What do these three dots in React do?
1814
Programmatically navigate using React router
743
How do I conditionally add attributes to React components?
913
What is the difference between React Native and React?