The community reviewed whether to reopen this question 13 days ago and left it closed:

I'm starting a new project and would like to get my table- and column names right from the start. For example I've always used plural in table names but recently learned singular is correct.

So, if I got a table "user" and then I got products that only the user will have, should the table be named "user_product" or just "product" ? This is a one to many relationship.

What about if i want a pure relational table (many to many) with only two columns, what would this look like? "user_stuff" or maybe something like "rel_user_stuff" ? And if the first one, what would distinguish this from, for example "user_product"?

Yes. Beware of the heathens. Plural in the table names are a sure sign of someone who has not read any of the standard materials and has no knowledge of database theory.

Some of the wonderful things about Standards are:

The standard table name refers to each row in the table, which is used in the all verbiage, not the total content of the table (we know that the Customer table contains all the Customers).

In genuine Relational Databases that have been modelled (as opposed to pre-1970's Record Filing Systems [characterised by Record IDs which are implemented in an SQL database container for convenience): 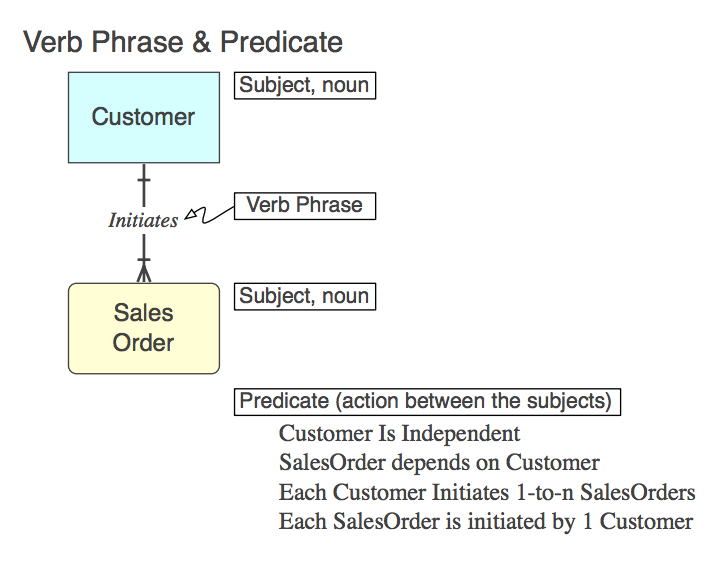 Of course, the relationship is implemented in SQL as a CONSTRAINT FOREIGN KEY in the child table (more, later). Here is the Verb Phrase (in the model), the Predicate that it represents (to be read from the model), and the FK Constraint Name:

However, when describing the table, particularly in technical language such as the Predicates, or other documentation, use singular and plurals as they naturally in the English language. Keeping in mind the table is named for the single row (relation) and the language refers to each derived row (derived relation):

So, if I got a table "user" and then I got products that only the user will have, should the table be named "user-product" or just "product"? This is a one to many relationship.

(That is not a naming-convention question; that is a a db design question.) It doesn't matter if user::product is 1::n. What matters is whether product is a separate entity and whether it is an Independent Table, ie. it can exist on its own. Therefore product, not user_product.

And if product exists only in the context of an user, ie. it is a Dependent Table, therefore user_product. 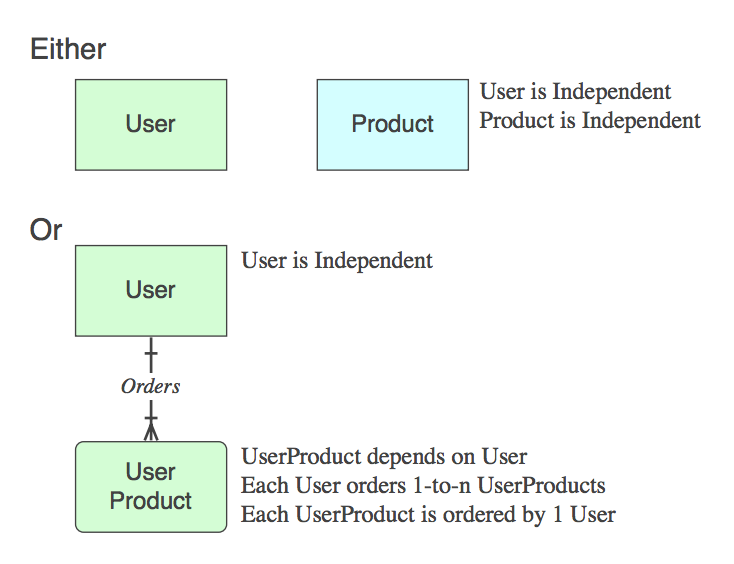 What about if i want a pure relational table (many to many) with only two columns, what would this look like? "user-stuff" or maybe something like "rel-user-stuff" ? And if the first one, what would distinguish this from, for example "user-product"?

What you are doing is very important, and it will affect the ease of use and understanding at every level. So it is good to get as much understanding as possible at the outset. The relevance of most of this will not be clear, until you start coding in SQL.

That cannot be reasonably answered in the comment space.

In any case, I will try to service your query. Which means I will have to add some sense to it, not knowing what you meant, so please bear with me. The gross errors are too many to list, and given the spare specification, I am not confident I have corrected them all.

In case you are not aware, the difference between square corners (Independent) and round corners (Dependent) is significant, please refer to the IDEF1X Notation link. Likewise the solid lines (Identifying) vs dashed lines (Non-identifying).

... what are the "natural" names the tables holding Customers, Products, Components, and Suppliers?

Now that I have resolved the tables, I don't understand your problem. Perhaps you can post a specific question.

VoteCoffee:
How are you handling the scenario Ronnis posted in his example where multiple relationships exist between 2 tables (user_likes_product, user_bought_product)? I may misunderstand, but this seems to result in duplicate table names using the convention you detailed.

Assuming there are no Normalisation errors, User likes Product is a predicate, not a table. Do not confuse them. Refer to my Answer, where it relates to Subjects, Verbs, and Predicates, and my response to Larry immediately above.

Therefore the event of more than one child table between two parent tables is not a problem, just name them as the Existential Fact re their content, and normalise the names.

The rules I gave for Verb Phrases for relationship names for Associative Tables come into play here. Here is a Predicate vs Table discussion, covering all points mentioned, in summary.

For a good short description re the proper use of Predicates and how to use them (which is quite a different context to that of responding to comments here), visit this answer, and scroll down to the Predicate section.

Charles Burns:
By sequence, I meant the Oracle-style object purely used to store a number and its next according to some rule (e.g. "add 1"). Since Oracle lacks auto-ID tables, my typical use is to generate unique IDs for table PKs. INSERT INTO foo(id, somedata) VALUES (foo_s.nextval, "data"...)

Ok, that is what we call a Key or NextKey table. Name it as such. If you have SubjectAreas, use COM_NextKey to indicate it is common across the database.

Btw, that is a very poor method of generating keys. Not scalable at all, but then with Oracle's performance, it is probably "just fine". Further, it indicates that your database is full of surrogates, not relational in those areas. Which means extremely poor performance and lack of integrity.

There is no 'correct' about singular vs plural - it is mostly a matter of taste.

It depends in part on your focus. If you think of the table as a unit, it holds 'plurals' (because it holds many rows - so a plural name is appropriate). If you think of the table name as identifying a row in a table, you'll prefer 'singular'. This means your SQL will be thought of as working on one row from the table. That's OK, though it is usually an oversimplification; SQL works on sets (more or less). However, we can go with singular for the answers to this question.

Singular vs. Plural: Pick one and stick with it.

Columns shouldn't be prefixed/suffixed/infixed or in anyway fixed with references to the fact that it is a column. The same goes for tables. Don't name tables EMPLOYEE_T or TBL_EMPLOYEES because the second it is replaced with a view, things get really confusing.

Actually, the only good thing about *fixes I can think of, is that you can use reserved words like where_t, tbl_order, user_vw. Of course, in those examples, using plural would have solved the issue :)

Don't name all keys "ID". Keys refering to the same thing, should have the same name in all tables. The user id column could be called USER_ID in the user table and all tables referencing the user. The only time it is renamed is when different users are playing different roles, such as Message(sender_user_id, receiver_user_id). This really helps when dealing with larger queries.

In general it is better to name "mapping tables" to match the relation it describes rather than the names of the referenced tables. A user can have any number of relations to products: user_likes_product, user_bought_product, user_wants_to_buy_product.

Plurals aren't bad as long as they are used consistently - but singular is my preference.

I would dispense with underscores unless you want to outline a many-to-many relationship; and use an initial capital because it helps distinguish things in ORMs.

But there are many naming conventions, so if you want to use underscores that's OK as long as its done consistently.

If only one user can have any product then

But if the product is shared by users:

If you save your underscores for many-to-many relationships you can do something like:

to form a M-to-M between UserProduct and Stuff - not sure from the question the exact nature of the many-to-many required.

There is not more correct to use singular than plural form, where have you heard that? I would rather say that plural form is more common for naming database tables...and in my opinion also more logic. The table most often contain more than one row ;) In a conceptual model though the names of the entities are often in singular.

About your question, if 'Product' and 'ProductDescription' are concepts with an identity (i.e. entities) in your model I would simply call the tables 'Products' and 'ProductDescriptions'. For tables that are used in order to implement a many-to-many relationship I most often use the naming convention "SideA2SideB", for example "Student2Course".

Not the answer you're looking for? Browse other questions tagged database database-design coding-style naming-conventions relational-database or ask your own question.

885
What is the naming convention in Python for variable and function names?
307
Enum Naming Convention - Plural
1435
What are the options for storing hierarchical data in a relational database?
629
REST URI convention - Singular or plural name of resource while creating it