How does SSL really work?

How does SSL work?

Where is the certificate installed on the client (or browser?) and the server (or web server?)?

How does the trust/encryption/authentication process start when you enter the URL into the browser and get the page from the server?

Note: I wrote my original answer very hastily, but since then, this has turned into a fairly popular question/answer, so I have expanded it a bit and made it more precise.

"SSL" is the name that is most often used to refer to this protocol, but SSL specifically refers to the proprietary protocol designed by Netscape in the mid 90's. "TLS" is an IETF standard that is based on SSL, so I will use TLS in my answer. These days, the odds are that nearly all of your secure connections on the web are really using TLS, not SSL.

A server authenticates itself to a client using a certificate. A certificate is a blob of data[1] that contains information about a website:

You can achieve confidentiality (#1 above) by using the public key included in the certificate to encrypt messages that can only be decrypted by the corresponding private key, which should be stored safely on that server.[2] Let's call this key pair KP1, so that we won't get confused later on. You can also verify that the domain name on the certificate matches the site you're visiting (#2 above).

But what if an adversary could modify packets sent to and from the server, and what if that adversary modified the certificate you were presented with and inserted their own public key or changed any other important details? If that happened, the adversary could intercept and modify any messages that you thought were securely encrypted.

To prevent this very attack, the certificate is cryptographically signed by somebody else's private key in such a way that the signature can be verified by anybody who has the corresponding public key. Let's call this key pair KP2, to make it clear that these are not the same keys that the server is using.

So who created KP2? Who signed the certificate?

And how would I personally get ahold of the public key in KP2 in order to verify that signature?

Well we've already seen that a certificate can hold a public key — and computer scientists love recursion — so why not put the KP2 public key into a certificate and distribute it that way? This sounds a little crazy at first, but in fact that's exactly how it works. Continuing with the Verisign example, Verisign produces a certificate that includes information about who they are, what types of things they are allowed to sign (other certificates), and their public key.

Now if I have a copy of that Verisign certificate, I can use that to validate the signature on the server certificate for the website I want to visit. Easy, right?!

Continuing to think recursively, we could of course introduce a third certificate and a third key pair (KP3) and use that to sign the Verisign certifcate. We call this a certificate chain: each certificate in the chain is used to verify the next certificate. Hopefully you can already see that this recursive approach is just turtles/certificates all the way down. Where does it stop?

Since we can't create an infinite number of certificates, the certificate chain obviously has to stop somewhere, and that's done by including a certificate in the chain that is self-signed.

I'll pause for a moment while you pick up the pieces of brain matter from your head exploding. Self-signed?!

Yes, at the end of the certificate chain (a.k.a. the "root"), there will be a certificate that uses it's own keypair to sign itself. This eliminates the infinite recursion problem, but it doesn't fix the authentication problem. Anybody can create a self-signed certificate that says anything on it, just like I can create a fake Princeton diploma that says I triple majored in politics, theoretical physics, and applied butt-kicking and then sign my own name at the bottom.

Authentication in TLS uses a system of conferred trust. If I want to hire an auto mechanic, I may not trust any random mechanic that I find. But maybe my friend vouches for a particular mechanic. Since I trust my friend, then I can trust that mechanic.

When you buy a computer or download a browser, it comes with a few hundred root certificates that it explicitly trusts.[4] The companies that own and operate those certificates can confer that trust to other organizations by signing their certificates.

This is far from a perfect system. Some times a CA may issue a certificate erroneously. In those cases, the certificate may need to be revoked. Revocation is tricky since the issued certificate will always be cryptographically correct; an out-of-band protocol is necessary to find out which previously valid certificates have been revoked. In practice, some of these protocols aren't very secure, and many browsers don't check them anyway.

Sometimes an entire CA is compromised. For example, if you were to break into Verisign and steal their root signing key, then you could spoof any certificate in the world. Notice that this doesn't just affect Verisign customers: even if my certificate is signed by Thawte (a competitor to Verisign), that doesn't matter. My certificate can still be forged using the compromised signing key from Verisign.

This isn't just theoretical. It has happened in the wild. DigiNotar was famously hacked and subsequently went bankrupt. Comodo was also hacked, but inexplicably they remain in business to this day.

Even when CAs aren't directly compromised, there are other threats in this system. For example, a government use legal coercion to compel a CA to sign a forged certificate. Your employer may install their own CA certificate on your employee computer. In these various cases, traffic that you expect to be "secure" is actually completely visible/modifiable to the organization that controls that certificate.

Some replacements have been suggested, including Convergence, TACK, and DANE.

[1] TLS certificate data is formatted according to the X.509 standard. X.509 is based on ASN.1 ("Abstract Syntax Notation #1"), which means that it is not a binary data format. Therefore, X.509 must be encoded to a binary format. DER and PEM are the two most common encodings that I know of.

[2] In practice, the protocol actually switches over to a symmetric cipher, but that's a detail that's not relevant to your question.

[3] Presumable, the CA actually validates who you are before signing your certificate. If they didn't do that, then I could just create a certificate for google.com and ask a CA to sign it. With that certificiate, I could man-in-the-middle any "secure" connection to google.com. Therefore, the validation step is a very important factor in the operation of a CA. Unfortunately, it's not very clear how rigorous this validation process is at the hundreds of CAs around the world.

HTTPS is combination of HTTP and SSL(Secure Socket Layer) to provide encrypted communication between client (browser) and web server (application is hosted here).

Why is it needed?

HTTPS encrypts data that is transmitted from browser to server over the network. So, no one can sniff the data during transmission.

How HTTPS connection is established between browser and web server?

This flow can be represented by the following diagram: 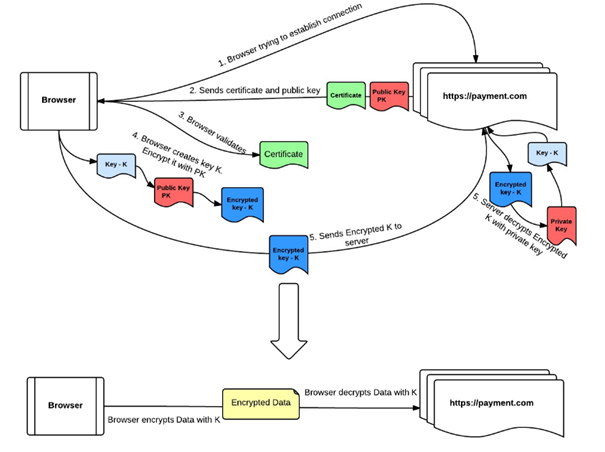 I have written a small blog post which discusses the process briefly. Please feel free to take a look.

A small snippet from the same is as follows:

"Client makes a request to the server over HTTPS. Server sends a copy of its SSL certificate + public key. After verifying the identity of the server with its local trusted CA store, client generates a secret session key, encrypts it using the server's public key and sends it. Server decrypts the secret session key using its private key and sends an acknowledgment to the client. Secure channel established."

Mehaase has explained it in details already. I will add my 2 cents to this series. I have many blogposts revolving around SSL handshake and certificates. While most of this revolves around IIS web server, the post is still relevant to SSL/TLS handshake in general. Here are few for your reference:

Do not treat CERTIFICATES & SSL as one topic. Treat them as 2 different topics and then try to see who they work in conjunction. This will help you answer the question.

SSL/TLS communication works solely on the basis of trust. Every computer (client/server) on the internet has a list of Root CA's and Intermediate CA's that it maintains. These are periodically updated. During SSL handshake this is used as a reference to establish trust. For exampe, during SSL handshake, when the client provides a certificate to the server. The server will try to cehck whether the CA who issued the cert is present in its list of CA's . When it cannot do this, it declares that it was unable to do the certificate chain verification. (This is a part of the answer. It also looks at AIA for this.) The client also does a similar verification for the server certificate which it receives in Server Hello. On Windows, you can see the certificate stores for client & Server via PowerShell. Execute the below from a PowerShell console.

Browsers like Firefox and Opera don't rely on underlying OS for certificate management. They maintain their own separate certificate stores.

The SSL handshake uses both Symmetric & Public Key Cryptography. Server Authentication happens by default. Client Authentication is optional and depends if the Server endpoint is configured to authenticate the client or not. Refer my blog post as I have explained this in detail.

Finally for this question

Certificates is simply a file whose format is defined by X.509 standard. It is a electronic document which proves the identity of a communicating party. HTTPS = HTTP + SSL is a protocol which defines the guidelines as to how 2 parties should communicate with each other.

If the above activity is done, then you will have a fair understanding of Certificates and SSL.

Not the answer you're looking for? Browse other questions tagged ssl ssl-certificate or ask your own question.

0
Which field is used to identify the root certificate from the cert store?
7
Asymmetric Encryption
2
C# Get xml site over SSL/TLS - https://
0
how puppet https communication works?
0
Google map javascript api url difference
0
Hash password at the client before sending to server side