I am completely new to docker and trying to figure out how to use docker in a case where i have a solution with 2 projects. All tutorials i've seen show with single project.

So, if someone could show step by step solution i would really appreciate it.

In Visual studio, i've added docker support to solution and got these files:

Under WebAPIProject, it created this Docker file:

then, under separate docker-compose 'project' i've got:

I am sure its something trivial with paths but i am just pretty lost with it all so if someone could shed a bit of a light on it?

I finally found a way how to built solutions with docker.

IMPORTANT: For this to work, you have to put the Dockerfile file into the same location where the solution file is

I've just created a docker file with the following content:

Note that I think you may have to respect project build dependencies but I don't know really.

While I understand that dotnet core isn't specific to Windows and not everyone is going to be using Visual Studio, there's this neat feature that Microsoft has included inside Visual Studio (Tried it in 2017).

If you have multiple Web Projects, repeat the step individually for each.

If you happen to run with any issues when running the Docker container, try deselecting Hyper-V Services in "Windows Features" (Search for Windows Features in Start Menu), selecting again, and then restarting your computer. Check here. 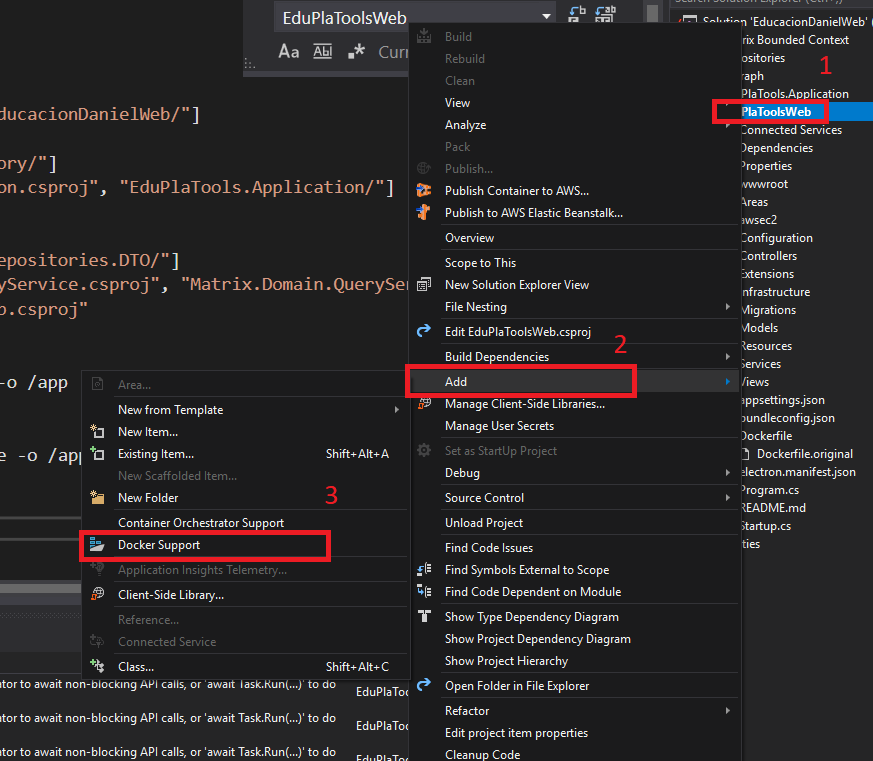 I had the same problem and all other solutions didn't fit my so I worked out my own. I feel that bellow steps are legible, but if you're new to Docker, I explained it line by line in my blog post dedicated to new Docker users (so you could understand precisely what is going on in this Dockerfile).

This links to an amazing post about how to tackle this issue.

He mentions putting all your code in a src directory. I didn't so that, and this is the file i came up with: (The key is the for file part. I'm sure it's not the best dockerfile otherwise; tips are welcome.)

This is a Docker configuration that worked for me. This was an ASP.NET Core 2 WebApi project with many child project references.

Hope this helpes someone.

Not the answer you're looking for? Browse other questions tagged docker asp.net-core or ask your own question.