I'm creating a c++ project that should works on several timezone. The application receives an event, with a reference timezone, and this event is shown graphically to the user at the correct hour, in his local timezone. For example, an user working in Berlin receives an event written in Tokyo. The event from Tokyo is first converted in UTC time, then reconverted from UTC to the computer local time in Berlin, and finally shown to the user on his graphical interface.

To convert from UTC to local computer time I have several functions of the Windows API at my disposal to do the job. But in order to convert a time from another timezone to UTC, I need to get the timezone information from the Windows registry.

Now some timezone have also a Daylight Saving Time to consider. I'm able to create a recurrence rule from the Windows info without problems. However I noticed that the day the DST should occur is sometimes incorrect on several timezone. For example, the "E. South America Standard Time". With the recurrence provided by Windows, the DST start day begins 1 week sooner. 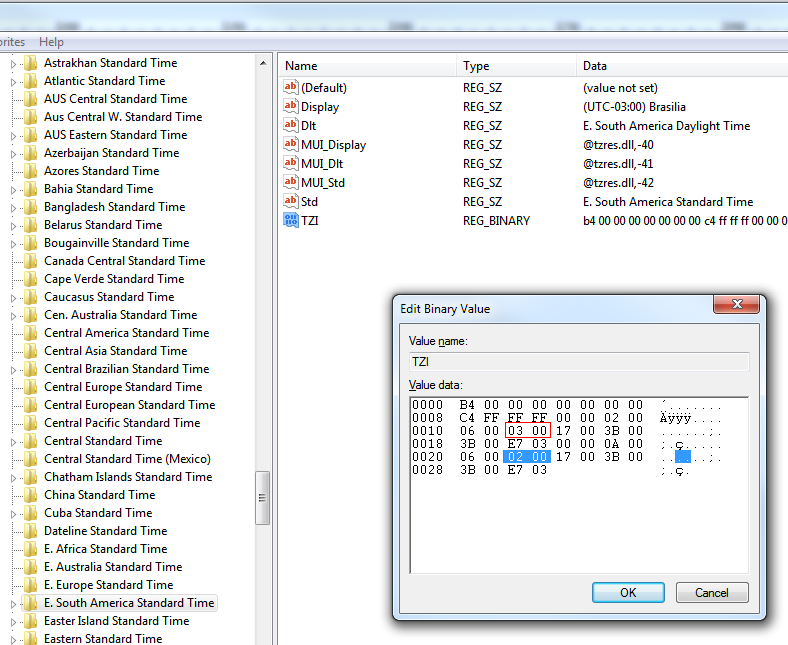 I have several questions

NOTE I have strongly verified if the data I read from the registry were correct before posting this message. I'm pretty sure that is not an error of this type.

NOTE I'm working with Windows 7, but the issue remains the same on Windows 10

There are several challenges, including the timing of time zone changes as given by governments. For example, we recently posted a notice about upcoming Windows time zone changes for Fiji, Cyprus, Sudan, Tonga, Namibia, and Turks & Caicos. In some cases, we can meet the effective-dates established by these different governments. In some cases we cannot because they don't offer enough lead time.

Consider the recent case of Sudan, who told the the IANA tz mailing list on October 17th, 2017 of a change effective November 1st 2017. IANA has processed this change, and so has Microsoft. But due to the short notice, and the time it takes to process such a change in the Windows operating system, it will be a little while before there is a new "Sudan Standard Time" time zone created in the Windows time zone data. Thus, we issue interim guidance to use a different time zone for the time being, then switch back once we have data that properly reflects the full history of time in the affected region.

With regard to the Windows time zone you mentioned, "E. South America Standard Time", the time zone data is correct. If you expand the registry entry, you'll see that there is a sub-key called "Dynamic DST" which contains the year-by-year changes to the data. For some time zones, this isn't necessary at all, and for other time zones you'll find a very small amount of data because the same rule repeats year after year. But in the case of Brazil, you'll notice Dynamic DST entries for 2009 through 2040. 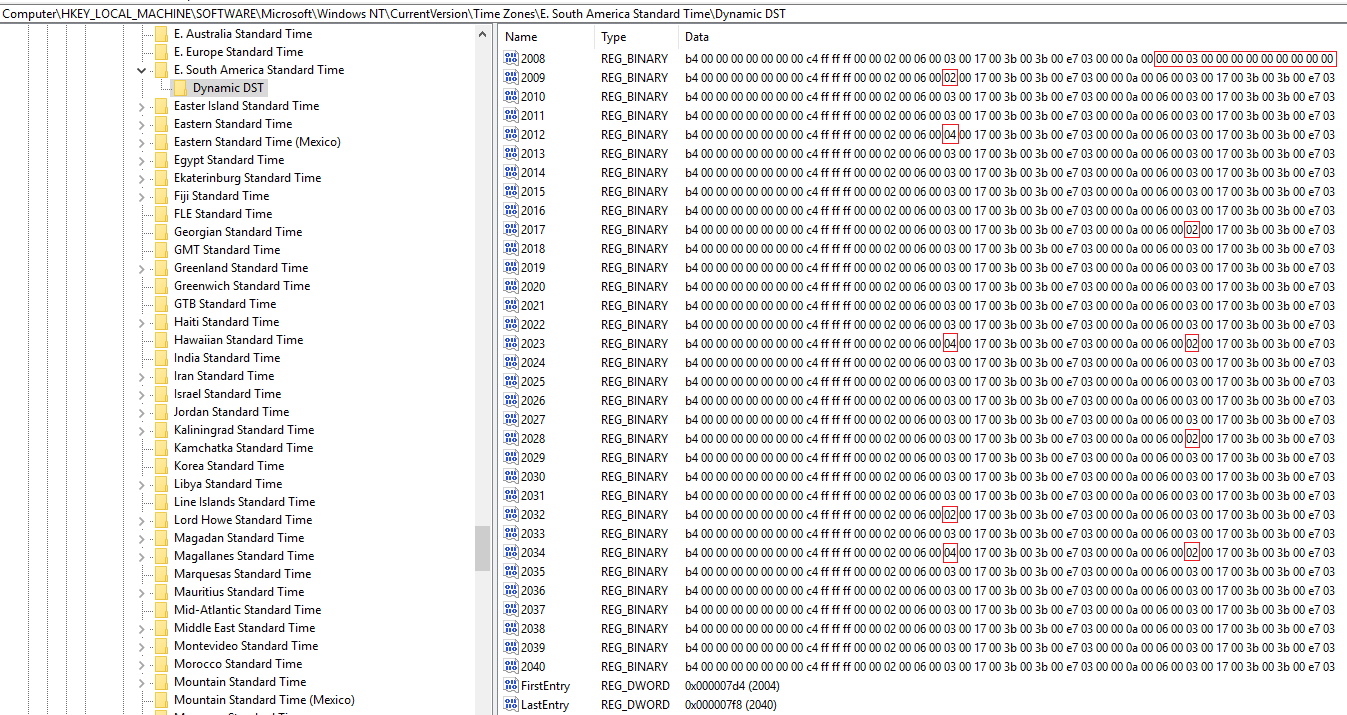 (click the image to see the full resolution, and note the areas I manually marked in red that change year-over-year)

The Dynamic DST entries support the Win32 DYNAMIC_TIME_ZONE_INFORMATION structure, and corresponding APIs with "dynamic" in their name, such as GetDynamicTimeZoneInformation. (They also support the System.TimeZoneInfo class in the .NET Framework.) Most of these APIs have been in places since Windows Vista / Server 2008, with some others coming in Windows 7 / Server 2012.

Note that the TZI entry that is in the parent key is copied in from the current year's dynamic rule by internal Windows processes. This supports the APIs that work with Win32 TIME_ZONE_INFORMATION structures, which have been in place since Windows 2000.

To answer the specific questions you asked:

Have I understood the recurrence rule correctly?

Also, you may wonder why it's 23:59:59.999 on Saturday instead of 00:00:00.000 on Sunday. This is an artifact of history. There have in the past been certain programs and processes that incorrectly used <= instead of < to evaluate the transition, and thus would accidently move the clock one millisecond into the next day, back out of it, then back into it again. The events generated by the day changing erroneously could then lead to further problems. Microsoft has done their best to fix those bugs, but still opts to be 1ms off instead of risk the problem popping up in some new place one day. (This only applies for transitions that occur exactly at midnight.)

Is there known issues about several timezone, especially the "E. South America Standard Time" one?

There are no known issues for that time zone, however there is a known issue that Windows time zones (even with the dynamic DST data) can only support a maximum of two time zone transitions in a single year. So, in places like Morocco that transition four times per year there are some internal workarounds in place that keep the current time zone data in sync such that "now" is an accurate representation of local time, but cannot represent all points of the year correctly at any given time.

We also don't currently have a time zone that maps cleanly for Troll Station, Antarctica. The reason is that from 2005 to 2015, this research station (population under 50) transitioned through three different offsets (UTC+0, UTC+1, and UTC+2) every year.

If your application is critically dependent on either of the above scenarios, then I recommend using an API with IANA data sources instead of the Win32 APIs.

Is there a reason why a DST start date, that obviously occurs regularly every year, on the 3rd week of the 10th month, have a value set on the 2nd week?

Are timezone written in Windows registry reliable, if not, which function of the Windows API should I use to convert a timezone with DST from a date written in a different timezone than the one set on the local machine?

If you are using the Win32 APIs, they use the registry data themselves, so there is no need to work with the registry data directly. You should prefer the "Dynamic" versions of the APIs, as they properly account for the year-over-year changes in the Dynamic DST data. Sometimes these are labeled as "Ex". For example, the function you asked about is best handled by the TzSpecificLocalTimeToSystemTimeEx function.

That all said, if you are able to avoid using Windows time zone data in your application, I recommend doing so. Prefer IANA data sources, or those derived from them. There are many routes to working with IANA time zone data. Newer Windows APIs like Windows.Globalization.Calendar and Windows.Globalization.DatetimeFormatting.DateTimeFormatter in WinRT/UWP do indeed use IANA time zones, and that is clearly the path forward. In the standard C++ space, I highly recommend using Howard Hinnant's date/tz libraries, or those provided by the ICU project. There are several other viable choices as well.

Great to see the level of detail in Matt’s post.

On the question of "Is there known issues about several timezone, especially the "E. South America Standard Time" one?"

Nothing much more to add save that in addition to Matt’s incredibly detailed and thorough contributions to the Windows time zone data, there’s considerable vetting with different agencies, NGOs and government bodies that’s been outlined elsewhere. As an example, there are additional challenges in places like Morocco which not only transitions four times a year, but the information is subject to the government setting the official observance of DST in the region, and sometimes with little lead time, leading to additional publishing and deployment challenges. (Not to mention when a government revises a decision multiple times.)

So, for some applications with critical dependencies, an API to IANA source may be preferred, or calling the time zone data in Windows.Globalization.

All this is timely, if you’ll pardon the pun, just before we Fall Back in the northern hemisphere as well.

Not the answer you're looking for? Browse other questions tagged c++ date time timezone dst or ask your own question.

48
How to store repeating dates keeping in mind Daylight Savings Time
6
Java 8 timezone for Instant.EPOCH is incorrect
2
Is there a flaw in Windows 7 Timezone rules
2
How reliable is TimeZoneInfo.GetUtcoffset?
0
Windows timezone transition information

3743
What are the differences between a pointer variable and a reference variable?
486
Create a Date with a set timezone without using a string representation
1569
What are rvalues, lvalues, xvalues, glvalues, and prvalues?
2379
What are the basic rules and idioms for operator overloading?
432
How do I get a value of datetime.today() in Python that is "timezone aware"?
2396
Why are elementwise additions much faster in separate loops than in a combined loop?
84
Is it always a good idea to store time in UTC or is this the case where storing in local time is better?
518
How to initialize a JavaScript Date to a particular time zone
0
C++ timegm conversion DST to a certain timezone at a given time in the future?
4
Timezones and Daylight saving in .NET round trip to server