How to remove an unpushed outgoing commit in Visual Studio?

I accidentally pushed a staged change in a new branch in Visual Studio 2017 to my local repository. It hasn't been pushed to the remote repository. I want to get rid of it but can't find a way to do this. I rebased from local master branch to the new branch. Then I deleted the new branch. But Outgoing Commits still shows it. How to delete it or revert it?

Open the history tab in Team Explorer from the Branches tile (right-click your branch). Then in the history right-click the commit before the one you don't want to push, choose Reset. That will move the branch back to that commit and should get rid of the extra commit you made. In order to reset before a given commit you thus have to select its parent.

I could not find a single good answer that helped me get rid of this issue.

Let's say the name of branch, you accidentally committed changes to, is master. Following four simple steps proved like a world to me:

Use git reset --soft HEAD~ in the cmd from the .sln folder

I was facing it today and was overwhelmed that VSCode suggests such thing, whereas its big brother Visual Studio doesn't.

Most of the answers weren't helpful; if I have more commits that were made before, losing them all would be frustrating. Moreover, if VSCode does it in half a second, it shouldn't be complex.

Only jessehouwing's answer was the closest to a simple solution.

Assuming the undesired commit(s) was the last one to happen, Here is how I solved it:

Go to Team Explorer -> Sync. There you'd see the all the commits. Press the Actions dropdown and Open Command Prompt 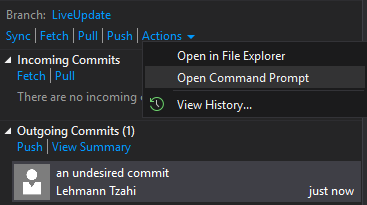 (If you're not using git, check colloquial usage).

I hope it will help, and hopefully in the next version VS team will add it builtin

Assuming you have pushed most recent changes to the server:

Once you reopen the project both commits and changes should be zero.

You have 2 options here to do that either to discard all your outgoing commits OR to undo specific commit ..

1- Discard all your outgoing commits:

To discard all your outgoing commits For example if you have local branch named master from remote branch, You can:

1- Rename your local branch from master to anything so you can remove it. 2- Remove the renamed branch. 3- create new branch from the master

So now you have a new branch without your commits ..

But FYI the reverted commit will appear in the history of your commits with the revert commit ..

My solution is insane, but to me the easiest way is to:

Not the answer you're looking for? Browse other questions tagged git visual-studio visual-studio-2017 or ask your own question.

7639
How to remove local (untracked) files from the current Git working tree
7655
How to modify existing, unpushed commit messages?
10473
How do I undo 'git add' before commit?
4077
How do I remove a submodule?
2106
Viewing unpushed Git commits
7620
How do I revert a Git repository to a previous commit?
1694
How can I reconcile detached HEAD with master/origin?
10413
How do I rename a local Git branch?
1774
Remove tracking branches no longer on remote
1247
How to rebase local branch onto remote master