A month later, I receive a bill from Google for over $370!

In the transaction details I see the following:

How did this testing environment with almost 0 requests require about 6,000 hours of resources? In the worst, I would have assume 720 hrs running fulltime for a month @ $0.05 per hour would cost me ~$40. https://cloud.google.com/appengine/pricing

Can someone help shed light on this? I have not been able to find out why so many resources were needed?

Thanks for the help!

For more data, this is the traffic over the last month (basically 0):

UPDATE: Note that I did bring one modification to the package.json: I added nodemon as a dependency and added it as part of my "nmp start" script. Though I doubt this explains the 6000 hours of resources:

After multiple back and forth with Google, and hours of reading blogs and looking at reports, I've finally (somewhat) found an explanation for what happened. I will post it here with my suggestions so that other people do not also fall victim to this problem.

Note, this may seem obvious to some, but as a new GAE user, all of this was brand new to me.

In short, when deploying to GAE and using the following command "$ gcloud app deploy", it creates a new version and sets it as the default, but also and more importantly, it does NOT remove the previous version that was deployed.

More info about versions and instances can be found here: https://cloud.google.com/appengine/docs/standard/python/an-overview-of-app-engine

So in my case, without knowing it, I had created multiple versions of my simple node app. These versions are still running in case one needs to switch following an error. But these versions also require instances, and the default, unless stated in the app.yaml, is 2 instances.

App Engine by default scales the number of instances running up and down to match the load, thus providing consistent performance for your app at all times while minimizing idle instances and thus reducing cost.

However, from my experience, this was not the case. As I said earlier, I pushed my node app with nodemon which it seems was causing errors.

In the end, following the tutorial and not shutting down the project, I had 4 versions, each with 2 instances running full-time for 1.5 months serving 0 requests and generating lots of error messages and it cost me $500.

RECOMMENDATIONS IF YOU STILL WANT TO USE GAE FLEX ENV: 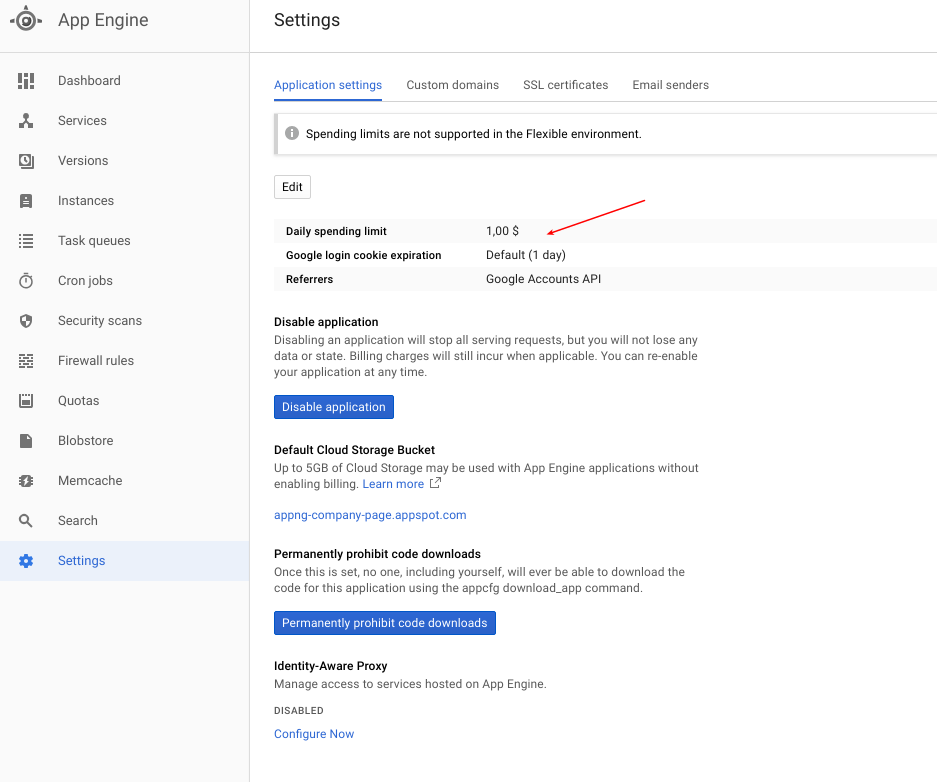 I wish some of these steps had been included in the tutorial in order to protect those who are trying to learn and experiment, but it was not.

Google App Engine Flex env can be tricky if one does not know all these details. A friend pointed me to Heroku, that has both set pricing and Free/Hobby offers. I was able to quickly push a new node app there, and it worked like charm! https://www.heroku.com/pricing

It "only" cost me $500 to learn this lesson, but I do hope this helps others looking at Google App Engine Flex Env.

If you want to reduce your GAE costs please DO NOT use manual_scaling as suggested in this article or the accepted answer!

The beautiful thing about Google App Engine is that it can scale up and down to hundreds of machines within milliseconds based on demand. And you only pay for instances that are running.

To be able to optimize your costs you need to understand the different scaling options and instance types:

The details about differences can be found here, but one important difference relevant for this question is:

[Standard is] Intended to run for free or at very low cost, where you pay only for what you need and when you need it. For example, your application can scale to 0 instances when there is no traffic. 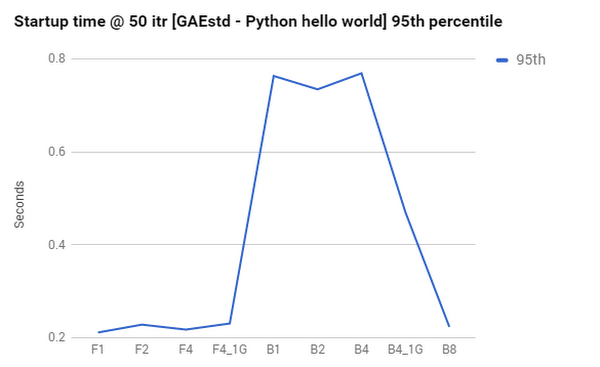 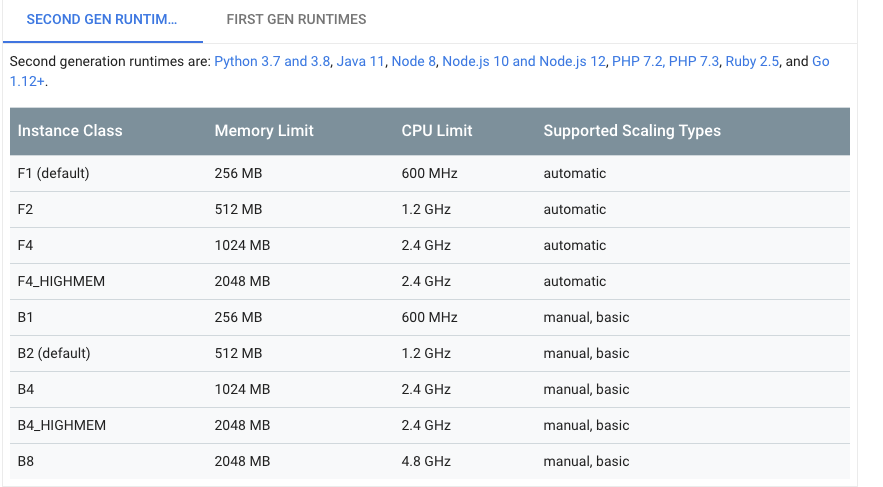 Now that you understood the basics let's go back to accepted answer:

What this instructs GAE is to run a custom instance class(more costly), all the time. Obviously this is not the cheapest option because B1/F1 instance type could be used instead(it has lower specs) and it is also running an instance constantly.

What would be the cheapest is to turn off the instance when there is no traffic. If you don't mind the ~0.1 second spin up time you could go with this instead:

This will fall within the free quotas google provide and it should not cost you anything if you don't have any real traffic.

PS: It's also highly recommended to set up daily spending limit in case you forgot something running or you have some costly settings somewhere(daily spending limits are deprecated but will be available until July 24, 2021, source).

We had code deployed to GAE FE go absolutely nuts due to a cascading, exponential failure (bounced emails generated bounced-email emails, etc.) and we could NOT turn off the GAE instances that were bugged. After 4+ hours, and 1M+ emails sent (Mailgun just would NOT let us disable the account. It said "Please wait up to 24 hours for the password change to go into effect", and revoking API keys did nothing), the redis VM was stopped, the DB down, and all the site's code reduced to a single "Down For Maintenance" static 503 page), the emails kept being sent.

I determined that GAE FE just simply does not end either docker VMs or Cloud Compute VMs (redis) that are under CPU load. Maybe never! Once we actually deleted the Compute VM (instead of "merely" stopping it), the emails instantly stopped.

But, our DB continued to get filled with "could not send email" notices for up to 2 more hours, despite the GAE app reporting 100% of the versions and instances to be "Stopped". I ended up having to change the Google Cloud SQL password.

We kept checking the bill, and the 7 rogue instances kept using up CPU and so we cancelled the card used on that account, and the site did, in fact, go down when the bill was past due, but so did the rogue instances. We never were able to resolve the situation with GAE email support.

Update (30 Sep 2020): This is still the worst moment of my 22 year career!! An entire company of 15 crack genius devs couldn't figure out how to turn off GAE. We knew customers were receiving MILLIONS of emails when one of my dev's couldn't access her GMail account. Couldn't unplug it, couldn't turn it off. It was quite a "Terminator" moment!

It wouldn't have been nearly so bad, except for expenses, if MailGun had allowed us to actually disable the API access or change the password. But it would have still been bad expense-wise on GAE.

I no longer trust servers I can't issue reboot on.

Also note that if you still want your app to have automatic scaling but you don't want the default minimum of 2 instances running at all times, you can configure your app.yaml like so:

Since no one mentioned, here are the gcloud commands related to the versions

for dev environments where I don't mind a little latency, I'm using the following settings:

And if you use your instance more than the free backend instance allowance try this:

It the AppEngine dashboard, watch the Instances, take note of the start time, and watch to ensure that after the idle_timeout period has passed the Instance count drop to zero and you see the message "This version has no instances deployed".

Not the answer you're looking for? Browse other questions tagged node.js google-app-engine google-cloud-platform or ask your own question.

471
What is the difference between Google App Engine and Google Compute Engine?
18
AppEngine warning - OpenBLAS WARNING - could not determine the L2 cache size on this system
-2
Google App Engine: unpredictable cost and discrepancy between app engine dashboard vs billing export
0
Flask on Python 3.7 more demanding (and expensive) than webapp2 on Python 2.7 with Google App Engine Standard environment
0
High TTFB with firebase cloud functions
0
Whats going on with my App Engine frontend instance usage?