In which scenario do I use a particular STL container?

I've been reading up on STL containers in my book on C++, specifically the section on the STL and its containers. Now I do understand each and every one of them have their own specific properties, and I'm close to memorizing all of them... But what I do not yet grasp is in which scenario each of them is used.

What is the explanation? Example code is much prefered.

This cheat sheet provides a pretty good summary of the different containers.

See the flowchart at the bottom as a guide on which to use in different usage scenarios: 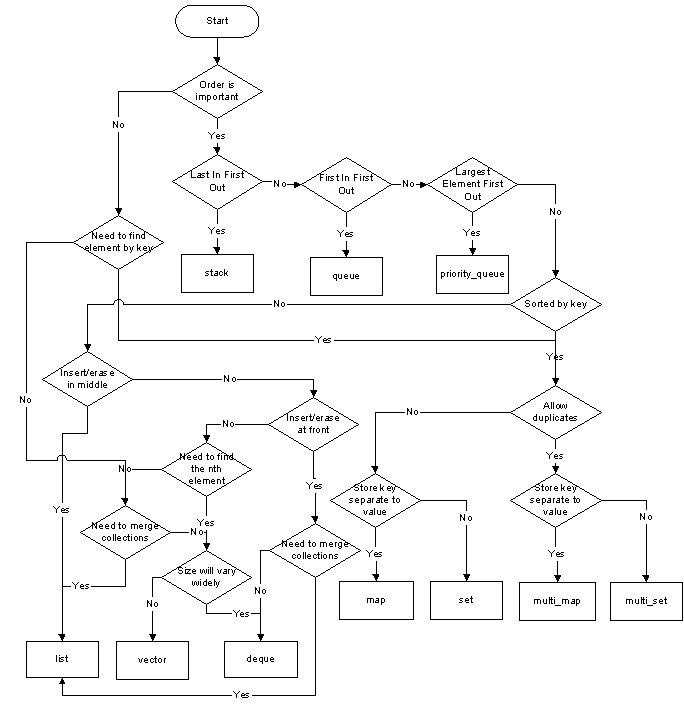 Here is a flowchart inspired by David Moore's version (see above) that I created, which is up-to-date (mostly) with the new standard (C++11). This is only my personal take on it, it's not indisputable, but I figured it could be valuable to this discussion: 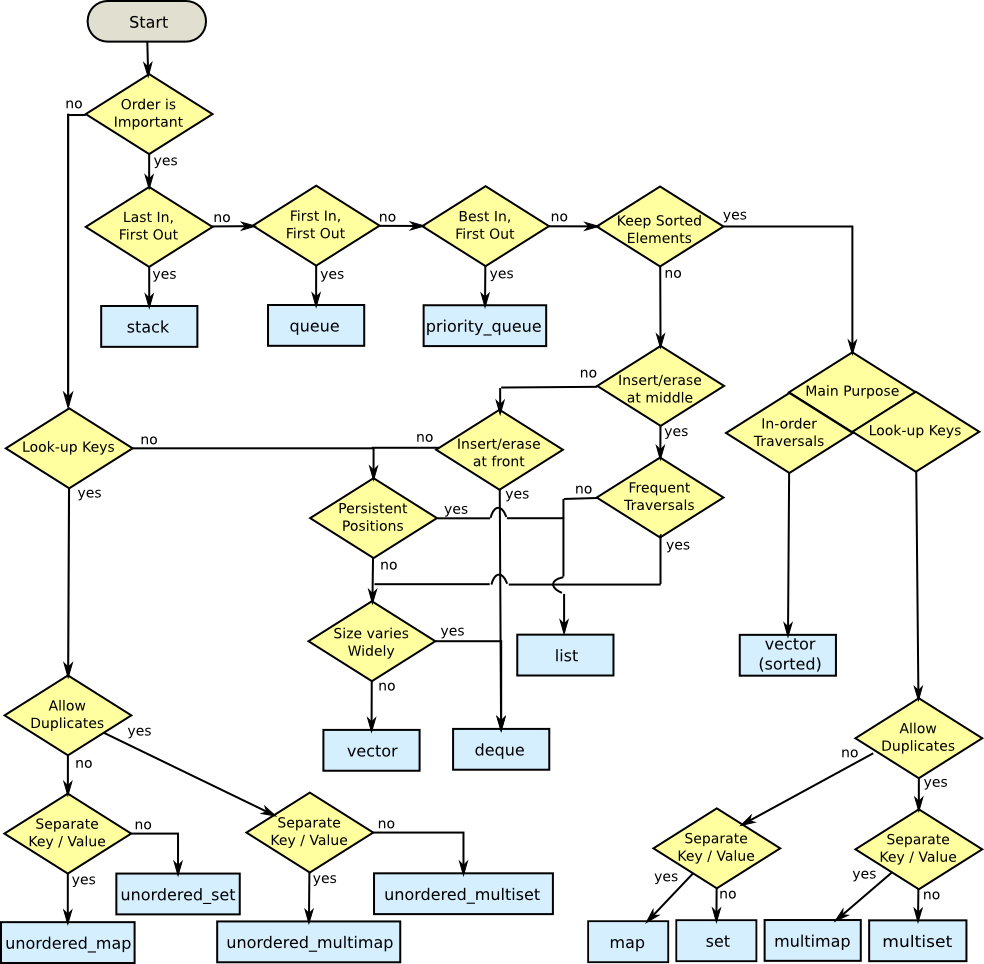 Simple answer: use std::vector for everything unless you have a real reason to do otherwise.

When you find a case where you're thinking, "Gee, std::vector doesn't work well here because of X", go on the basis of X.

Look at Effective STL by Scott Meyers. It's good at explaining how to use the STL.

If you want to store a determined/undetermined number of objects and you're never going to delete any, then a vector is what you want. It's the default replacement for a C array, and it works like one, but doesn't overflow. You can set its size beforehand as well with reserve().

If you want to store an undetermined number of objects, but you'll be adding them and deleting them, then you probably want a list...because you can delete an element without moving any following elements - unlike vector. It takes more memory than a vector, though, and you can't sequentially access an element.

If you want to take a bunch of elements and find only the unique values of those elements, reading them all into a set will do it, and it will sort them for you as well.

If you have a lot of key-value pairs, and you want to sort them by key, then a map is useful...but it will only hold one value per key. If you need more than one value per key, you could have a vector/list as your value in the map, or use a multimap.

It's not in the STL, but it is in the TR1 update to the STL: if you have a lot of key-value pairs that you're going to look up by key, and you don't care about their order, you might want to use a hash - which is tr1::unordered_map. I've used it with Visual C++ 7.1, where it was called stdext::hash_map. It has a lookup of O(1) instead of a lookup of O(log n) for map.

I redesigned the flowchart to have 3 properties: 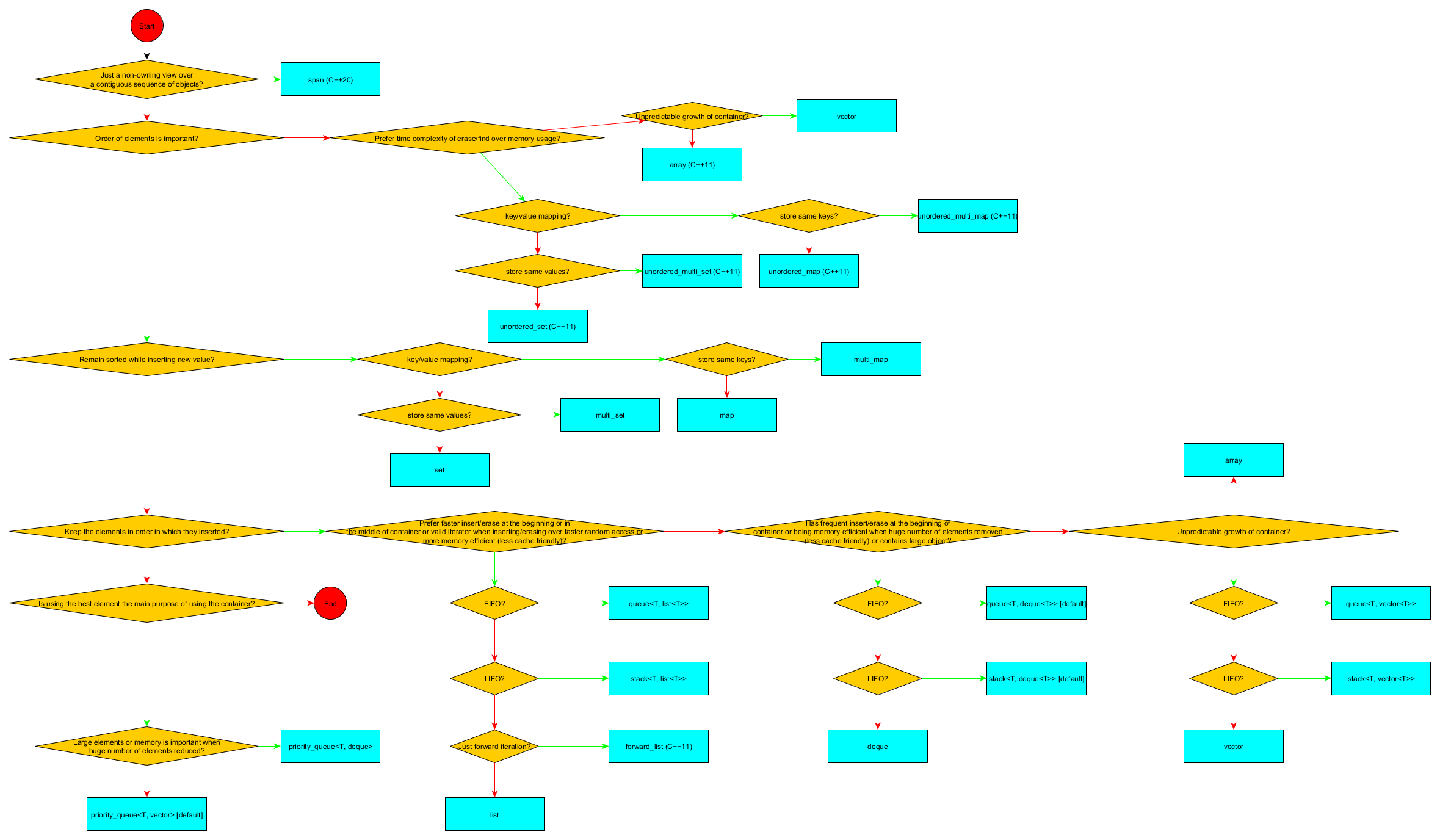 More info provided in this link.

An important point only briefly mentioned so far, is that if you require contiguous memory (like a C array gives), then you can only use vector, array, or string.

Use array if the size is known at compile time.

Use string if you only need to work with character types and need a string, not just a general-purpose container.

Use vector in all other cases (vector should be the default choice of container in most cases anyway).

With all three of these you can use the data() member function to get a pointer to the first element of the container.

vector: Compact layout with little or no memory overhead per contained object. Efficient to iterate over. Append, insert and erase can be expensive, particularly for complex objects. Cheap to find a contained object by index, e.g. myVector[10]. Use where you would have used an array in C. Good where you have a lot of simple objects (e.g. int). Don't forget to use reserve() before adding a lot of objects to the container.

list: Small memory overhead per contained object. Efficient to iterate over. Append, insert and erase are cheap. Use where you would have used a linked list in C.

set (and multiset): Significant memory overhead per contained object. Use where you need to find out quickly if that container contains a given object, or merge containers efficiently.

map (and multimap): Significant memory overhead per contained object. Use where you want to store key-value pairs and look up values by key quickly.

The flow chart on the cheat sheet suggested by zdan provides a more exhaustive guide.

One lesson I've learned is: Try to wrap it in a class, since changing the container type one fine day can yield big surprises.

It doesn't cost much up front, and saves time in debugging when you want to break whenever somebody does operation x on this structure.

Coming to selecting the perfect data structure for a job:

Each data structure provides some operations, which can be varying time complexity:

You essentially have to take a best guess, on which operations will be done most, and use a data structure which has that operation as O(1).

I answered this in another question which is marked as dup of this one. But I feel that it is nice to refer to some good articles regarding the decision to choose a standard container.

As @David Thornley answered, std::vector is the way to go if there are no other special needs. This is the advice given by the creator of C++, Bjarne Stroustrup in a 2014 blog.

Here is the link for the article https://isocpp.org/blog/2014/06/stroustrup-lists

and quote from that one,

And, yes, my recommendation is to use std::vector by default.

In the comments, user @NathanOliver also provides another good blog, which has more concrete measurements. https://baptiste-wicht.com/posts/2012/12/cpp-benchmark-vector-list-deque.html .

I expanded on Mikael Persson's fantastic flowchart. I added some container categories, the array container, and some notes. If you'd like your own copy, here is the Google Drawing. Thanks, Mikael for doing the groundwork! C++ Container Picker

Not the answer you're looking for? Browse other questions tagged c++ stl container-data-type or ask your own question.

7
Which STL Container to use?
5
Which data structure should i use for my purpose?
-1
Which C++ std collection is most suitable for creating C style array (Foo*)?
-1
Finding appropriate container type
0
STL container to walk forwards and backwards
0
Which STL container can be used for quickly finding and erasing elements in it
0
What is the right container for an array in modern c++
0
Best C++ data structure for selection and deletion at random points
332
In Python, when to use a Dictionary, List or Set?
239
Which kind of pointer do I use when?
See more linked questions

2075
What is a smart pointer and when should I use one?
416
Why does the C++ STL not provide any "tree" containers?
1772
When to use virtual destructors?
223
Why is the C++ STL is so heavily based on templates? (and not on *interfaces*)
491
What's the difference between "STL" and "C++ Standard Library"?
5
stl compliant container
1831
Image Processing: Algorithm Improvement for 'Coca-Cola Can' Recognition
8
STL containers and non copyable (and non movable) objects
1820
Why should I use a pointer rather than the object itself?
1578
Compiling an application for use in highly radioactive environments