This is an interview question.

I answered "No", because we can't access them using the "normal OOP way". But the interviewer thinks that they are inherited, because we can access such fields indirectly or using reflection and they still exist in the object.

After I came back, I found the following quote in the javadoc:

A subclass does not inherit the private members of its parent class.

Do you know any arguments for the interviewer's opinion?

Most of the confusion in the question/answers here surrounds the definition of Inheritance.

Obviously, as @DigitalRoss explains an OBJECT of a subclass must contain its superclass's private fields. As he states, having no access to a private member doesn't mean its not there.

However. This is different than the notion of inheritance for a class. As is the case in the java world, where there is a question of semantics the arbiter is the Java Language Specification (currently 3rd edition).

This addresses the exact question posed by the interviewer: "do subCLASSES inherit private fields". (emphasis added by me)

Is it semantics of a pedantic nature? Yes. Is it a useful interview question? Probably not. But the JLS establishes the definition for the Java world, and it does so (in this case) unambiguously.

EDITED (removed a parallel quote from Bjarne Stroustrup which due to the differences between java and c++ probably only add to the confusion. I'll let my answer rest on the JLS :)

It's important to realize that while there are two classes, there is only one object.

So, yes, of course it inherited the private fields. They are, presumably, essential for proper object functionality, and while an object of the parent class is not an object of the derived class, an instance of the derived class is mostly definitely an instance of the parent class. It could't very well be that without all of the fields.

No, you can't directly access them. Yes, they are inherited. They have to be.

It's a good question!

Well, I guess we all learned something. Since the JLS originated the exact "not inherited" wording, it is correct to answer "no". Since the subclass can't access or modify the private fields, then, in other words, they are not inherited. But there really is just one object, it really does contain the private fields, and so if someone takes the JLS and tutorial wording the wrong way, it will be quite difficult to understand OOP, Java objects, and what is really happening.

The controversy here involves a fundamental ambiguity: what exactly is being discussed? The object? Or are we talking in some sense about the class itself? A lot of latitude is allowed when describing the class as opposed to the object. So the subclass does not inherit private fields, but an object that is an instance of the subclass certainly does contain the private fields.

No. Private fields are not inherited... and that's why Protected was invented. It is by design. I guess this justified the existence of protected modifier.

Now coming to the contexts. What you mean by inherited -- if it is there in the object created from derived class? yes, it is.

If you mean can it be useful to derived class. Well, no.

Functionally, it's not inherited. But ideally, it is.

OK, just looked into Java tutorial they quote this:

I believe it's purely matter of point-of-view. You may mould the argument either side. It's better justify both way.

It depends on your definition of "inherit". Does the subclass still have the fields in memory? Definitely. Can it access them directly? No. It's just subtleties of the definition; the point is to understand what's really happening.

If I remember correctly, a child object in memory consists of two regions. One is the parent part only and the other is the child part only. A child can access the private section in the code of its parent only via a public method in the parent.

Think of it this way. Borat's father Boltok has a safe containing $100,000. He does not want to share his "private" variable safe. So, he does not provide a key for the safe. Borat inherits the safe. But, what good is it if he cannot even open it ? If only his dad had provided the key.

No. They don't inherit it.

The fact some other class may use it indirectly says nothing about inheritance, but about encapsulation.

You can also get the value of count inside UseIt via reflection. It doesn't means, you inherit it.

Even though the value is there, it is not inherited by the subclass.

For instance a subclass defined as:

This is exactly the same situation as the first example. The attribute count is hidden and not inherited by the subclass at all. Still, as DigitalRoss points out, the value is there, but not by means on inheritance.

Put it this way. If your father is wealthy and gives you a credit card, you can still buy thing with his money, but doesn't mean you have inherited all that money, does it?

It is very interesting though, to know why the attribute is there.

I frankly don't have the exact term to describe it, but it's the JVM and the way it works that loads also the "not inherited" parent definition.

We could actually change the parent and the subclass will still work.

I guess the exact term could be found here: The JavaTM Virtual Machine Specification

Well, my answer to interviewer's question is - Private members are not inherited in sub-classes but they are accessible to subclass or subclass's object only via public getter or setter methods or any such appropriate methods of original class. The normal practice is to keep the members private and access them using getter and setter methods which are public. So whats the point in only inheriting getter and setter methods when the private member they deal with are not available to the object? Here 'inherited' simply means it is available directly in the sub-class to play around by newly introduced methods in sub-class.

Save the below file as ParentClass.java and try it yourself ->

If we try to use private variable x of ParentClass in SubClass's method then it is not directly accessible for any modifications (means not inherited). But x can be modified in SubClass via setX() method of original class as done in setXofParent() method OR it can be modified using ChildClass object using setX() method or setXofParent() method which ultimately calls setX(). So here setX() and getX() are kind of gates to the private member x of a ParentClass.

Another simple example is Clock superclass has hours and mins as private members and appropriate getter and setter methods as public. Then comes DigitalClock as a sub-class of Clock. Here if the DigitalClock's object doesn't contain hours and mins members then things are screwed up.

Ok, this is a very interesting problem I researched a lot and came to a conclusion that private members of a superclass are indeed available (but not accessible) in the subclass's objects. To prove this, here is a sample code with a parent class and a child class and I am writing child class object to a txt file and reading a private member named 'bhavesh' in the file, hence proving it is indeed available in the child class but not accessible due to the access modifier.

Open MyData1.txt and search for the private member named 'bhavesh'. Please let me know what you guys think.

PS One of the many definitions of inheritance that I have come across: "Inheritance -- a programming technique that allows a derived class to extend the functionality of a base class, inheriting all of its STATE (emphasis is mine) and behaviour."

The private fields, even if not accessible by the subclass, are the inherited state of the superclass. 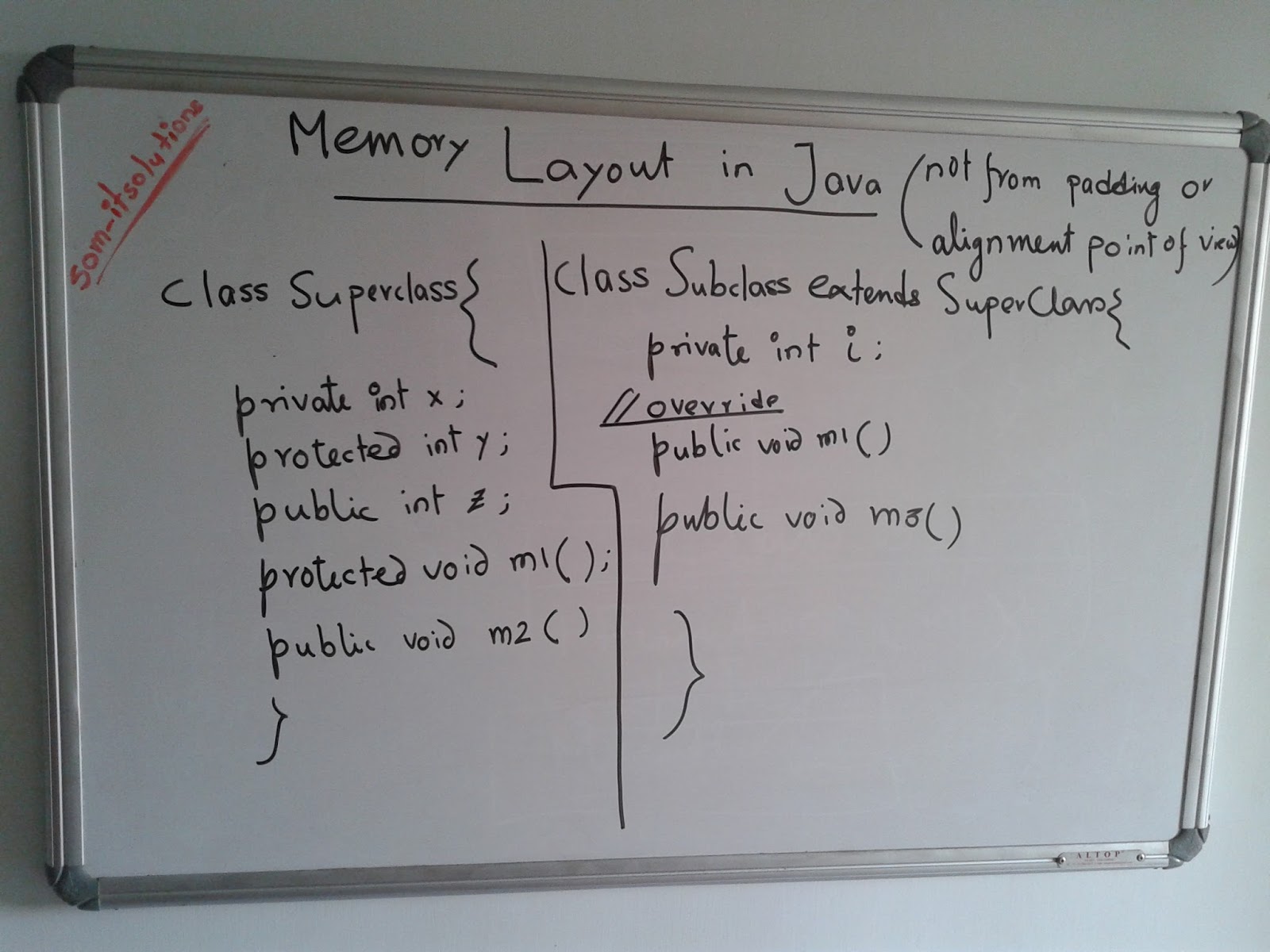 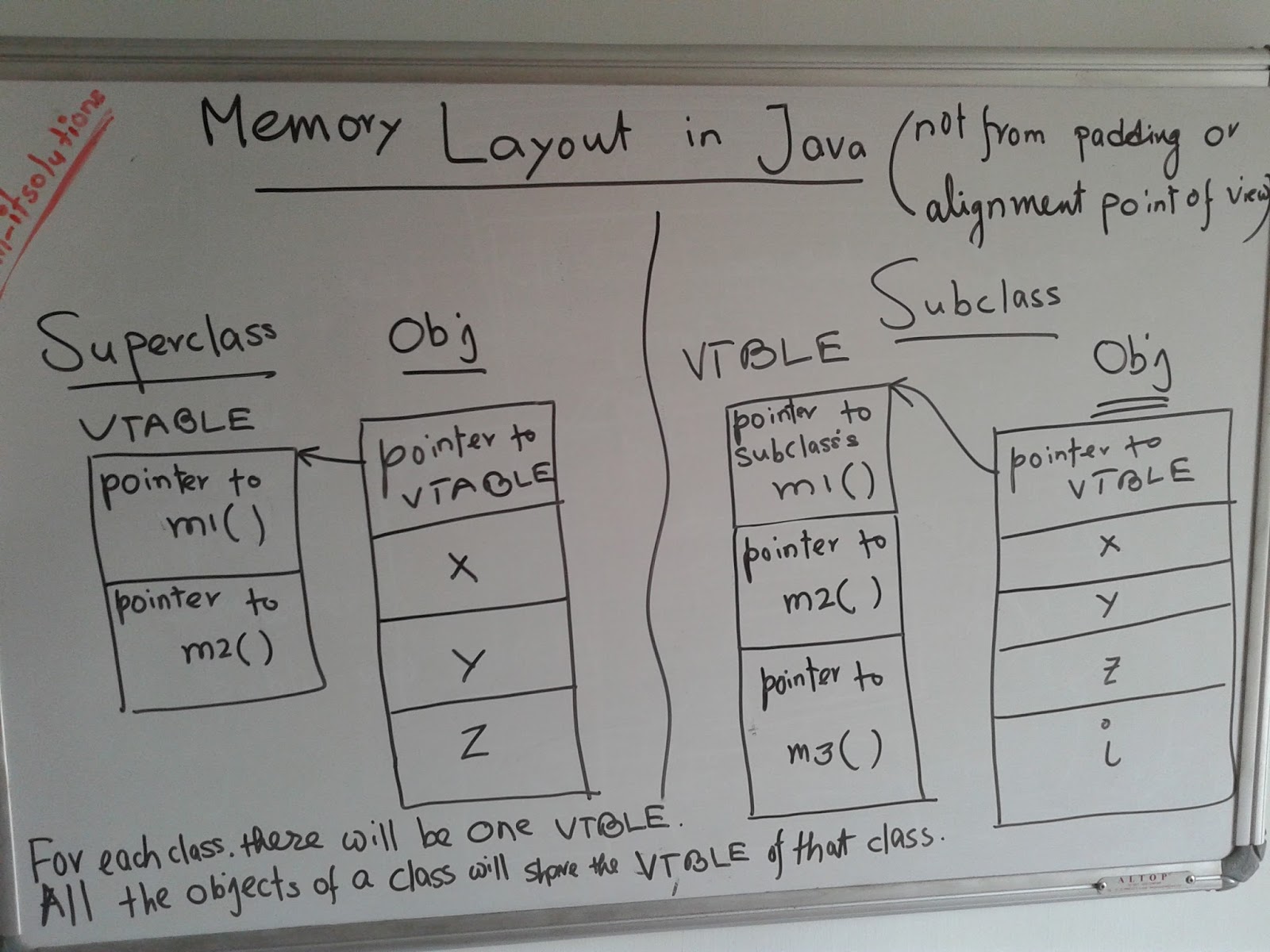 Padding bits/Alignment and the inclusion of Object Class in the VTABLE is not considered. So the object of the subclass does have a place for the private members of the Super class. However, it cannot be accessed from the subclass's objects...

I would have to answer that private fields in Java are inherited. Allow me to demonstrate:

If you run in a program Bar bar = new Bar();, then you will always see the number "2" in the output box. Because the integer "x" is encapsulated with the methods update() and getX(), then it can be proven that the integer is inherited.

The confusion is that because you can't directly access the integer "x", then people argue that it isn't inherited. However, every non-static thing in a class, be it field or method, is inherited.

No, private fields are not inherited. The only reason is that subclass can not access them directly.

I believe, answer is totally dependent on the question, which has been asked. I mean, if question is

Can we directly access the private field of the super-class from their sub-class ?

Then answer is No, if we go through the access specifier details, it is mentioned, private members are accessible only within the class itself.

But, if question is

Can we access the private field of the super-class from their sub-class ?

Other OOPs language like C++, have the friend function concept, by which we can access the private member of other class.

A subclass does not inherit the private members of its parent class. However, if the superclass has public or protected methods for accessing its private fields, these can also be used by the subclass

Private members (state and behavior) are inherited. They (can) affect the behavior and size of the object which is instantiated by the class. Not to mention that they are very well visible to the subclasses via all the encaptulation-breaking mechanisms that are available, or can be assumed by their implementers.

Although inheritance has a "defacto" definition, it definitely has no link to "visibility" aspects, which get assumed by the "no" answers.

So, there is no need to be diplomatic. JLS is just wrong at this point.

Any assumption that they are not "inherited" is unsafe and dangerous.

So among two defacto (partially) conflicting definitions (which I will not repeat), the only one that should be followed is the one that is safer (or safe).

Not the answer you're looking for? Browse other questions tagged java oop inheritance private or ask your own question.

4
Why does following code compile and run successfully?
4
Private members and inheritance
3
use private variable in inhertence
0
Are private fields and methods inherited?
1
Do subclasses have all the properties and methods of the parent class?
-5
Are private members of the superclass also instantiated, when a subclass is instantiated?
0
Where do private fields of super class live when accessed from sub class using public getter?
0
Do private data members get inherited in Java
1
Inheritance a big confusion for me
0
Will sub classes contain private methods and member variables from super classes in the background?
See more linked questions