How to switch environment on Jupyter notebook for new notebook?

I have an instance with various environment and some notebooks are compatible with different environment for e.g. notebook1 is for MXNet and notebook2 is for Tensorflow.

How do I jump to new environment when I move from notebook1 to notebook2? I tried doing that but this doesn't quite work with Jupyter notebook? Any suggestion?

So I need to do it from conda environment but looks like jupyter notebook UI doesn't respect (calls right activation function) to set the path.

If you are using anaconda, you would do the following in a terminal:

Then in a second terminal:

Installing the nb_conda_kernels package as suggested by user @jcb91 worked for me. I did have to install it both in my root (base) environment as well as the virtual environment with which I wanted to use it. To do this, run the following in the Anaconda prompt (in your base environment):

Then, activate your virtual environment (in the code below named 'myenv') and install the nb_conda_kernels package there as well. You can do this by running in the Anaconda prompt:

You now should be able to switch to your different environment using:

I don't really know the definition and relationship between kernel and conda env, but I beleive we can set a kernel for each env. 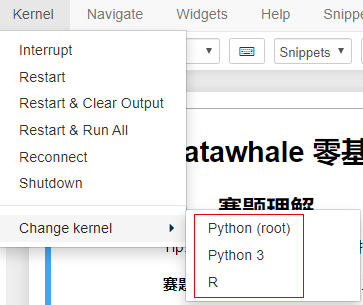 However, I still can not figure out the relationship between kernel and env.

Along with this package I think also need to change the ~/.jupyter/jupyter_notebook_config.py file with following config

Not the answer you're looking for? Browse other questions tagged python anaconda jupyter-notebook jupyter conda or ask your own question.