How do I efficiently determine if a polygon is convex, non-convex or complex?

From the man page for XFillPolygon:

I am having performance problems with fill XFillPolygon and, as the man page suggests, the first step I want to take is to specify the correct shape of the polygon. I am currently using Complex to be on the safe side.

Is there an efficient algorithm to determine if a polygon (defined by a series of coordinates) is convex, non-convex or complex?

You can make things a lot easier than the Gift-Wrapping Algorithm... that's a good answer when you have a set of points w/o any particular boundary and need to find the convex hull.

In contrast, consider the case where the polygon is not self-intersecting, and it consists of a set of points in a list where the consecutive points form the boundary. In this case it is much easier to figure out whether a polygon is convex or not (and you don't have to calculate any angles, either):

The polygon is convex if the z-components of the cross products are either all positive or all negative. Otherwise the polygon is nonconvex.

If the polygon is self-intersecting, then it fails the technical definition of convexity even if its directed angles are all in the same direction, in which case the above approach would not produce the correct result.

This question is now the first item in either Bing or Google when you search for "determine convex polygon." However, none of the answers are good enough.

The (now deleted) answer by @EugeneYokota works by checking whether an unordered set of points can be made into a convex polygon, but that's not what the OP asked for. He asked for a method to check whether a given polygon is convex or not. (A "polygon" in computer science is usually defined [as in the XFillPolygon documentation] as an ordered array of 2D points, with consecutive points joined with a side as well as the last point to the first.) Also, the gift wrapping algorithm in this case would have the time-complexity of O(n^2) for n points - which is much larger than actually needed to solve this problem, while the question asks for an efficient algorithm.

@JasonS's answer, along with the other answers that follow his idea, accepts star polygons such as a pentagram or the one in @zenna's comment, but star polygons are not considered to be convex. As @plasmacel notes in a comment, this is a good approach to use if you have prior knowledge that the polygon is not self-intersecting, but it can fail if you do not have that knowledge.

@Sekhat's answer is correct but it also has the time-complexity of O(n^2) and thus is inefficient.

@LorenPechtel's added answer after her edit is the best one here but it is vague.

A correct algorithm with optimal complexity

The algorithm I present here has the time-complexity of O(n), correctly tests whether a polygon is convex or not, and passes all the tests I have thrown at it. The idea is to traverse the sides of the polygon, noting the direction of each side and the signed change of direction between consecutive sides. "Signed" here means left-ward is positive and right-ward is negative (or the reverse) and straight-ahead is zero. Those angles are normalized to be between minus-pi (exclusive) and pi (inclusive). Summing all these direction-change angles (a.k.a the deflection angles) together will result in plus-or-minus one turn (i.e. 360 degrees) for a convex polygon, while a star-like polygon (or a self-intersecting loop) will have a different sum ( n * 360 degrees, for n turns overall, for polygons where all the deflection angles are of the same sign). So we must check that the sum of the direction-change angles is plus-or-minus one turn. We also check that the direction-change angles are all positive or all negative and not reverses (pi radians), all points are actual 2D points, and that no consecutive vertices are identical. (That last point is debatable--you may want to allow repeated vertices but I prefer to prohibit them.) The combination of those checks catches all convex and non-convex polygons.

Here is code for Python 3 that implements the algorithm and includes some minor efficiencies. The code looks longer than it really is due to the the comment lines and the bookkeeping involved in avoiding repeated point accesses.

The following Java function/method is an implementation of the algorithm described in this answer.

The algorithm is guaranteed to work as long as the vertices are ordered (either clockwise or counter-clockwise), and you don't have self-intersecting edges (i.e. it only works for simple polygons).

Here's a test to check if a polygon is convex.

Consider each set of three points along the polygon. If every angle is 180 degrees or less you have a convex polygon. When you figure out each angle, also keep a running total of (180 - angle). For a convex polygon, this will total 360.

This test runs in O(n) time.

Note, also, that in most cases this calculation is something you can do once and save — most of the time you have a set of polygons to work with that don't go changing all the time.

To test if a polygon is convex, every point of the polygon should be level with or behind each line. 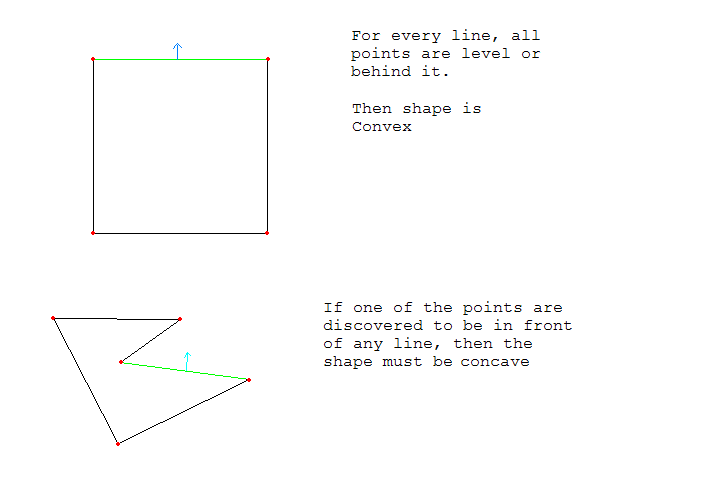 The answer by @RoryDaulton seems the best to me, but what if one of the angles is exactly 0? Some may want such an edge case to return True, in which case, change "<=" to "<" in the line :

Here are my test cases which highlight the issue :

The 2nd assert fails in the original answer. Should it? For my use case, I would prefer it didn't.

For an array of vertices:

I implemented both algorithms: the one posted by @UriGoren (with a small improvement - only integer math) and the one from @RoryDaulton, in Java. I had some problems because my polygon is closed, so both algorithms were considering the second as concave, when it was convex. So i changed it to prevent such situation. My methods also uses a base index (which can be or not 0).

These are my test vertices:

And now the algorithms:

And now from Uri Goren

Adapted Uri's code into matlab. Hope this may help.

Be aware that Uri's algorithm only works for simple polygons! So, be sure to test if the polygon is simple first!

Not the answer you're looking for? Browse other questions tagged algorithm geometry polygon computational-geometry xlib or ask your own question.

542
How can I determine whether a 2D Point is within a Polygon?
83
How do I calculate the area of a 2d polygon?
287
How to determine if a list of polygon points are in clockwise order?
4020
How can I pair socks from a pile efficiently?
4
Non-convex polygon - preprocess to use convex hull algorithm
0
Finding edges of a non self-intersecting polygon from given vertices
1
Polygon-polygon-intersection fails in special case
3
How to calculate area of polygon from list of points with python?