How can I parallelize sorting?

I would like to sort a large number of things.

Julia's standard library sort is single threaded. How can I take advantage of my multicore machine to sort things faster?

Here is a solution using the (kind of experimental) Base.Threads threading module.

A solution using a pmap (etc) for a distributed parallelism would be similar. Though I think the inter-process communications overhead would hurt you.

The idea is to sort it in blocks (one per a thread), so each thread can be fully independent, just taking care of its blocks.

Then comes to merge these pre-sorted blocks.

This is a fairly well known problem of merging sorted lists. See also other questions on that.

And don't forget to set yourself up the multi-threading, by setting the environment variable JULIA_NUM_THREADS before you start.

I have done some benchmarking: 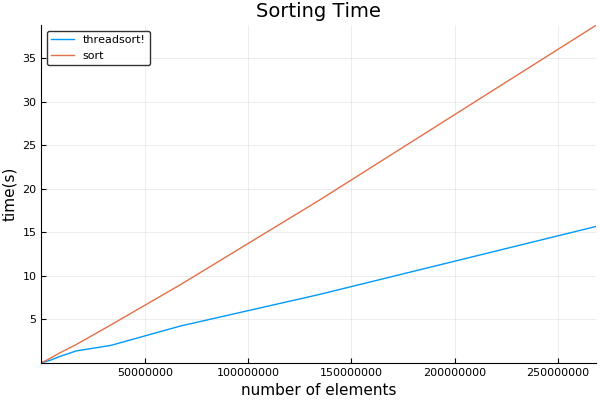 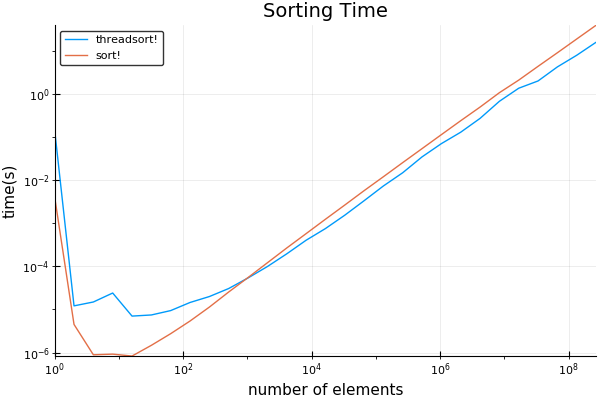 I found the crossover point to be surprisingly low, a bit over 1024. Notes that the initial long time taken can be ignored -- that is the code being JIT compiled for the first run.

Weirdly, these results do not reproduce when using BenchmarkTools. Benchmark tools would have stopped that initial timing being counted. But they do very consistently reproduce when using normal timing code as I have in the benchmark code above. I guess it is doing something that kills the multithreading some how 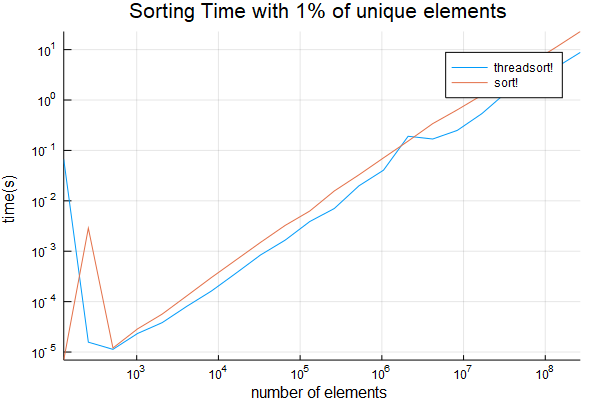 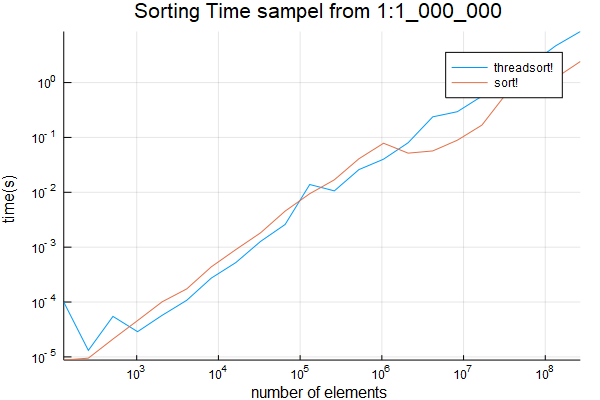 Not the answer you're looking for? Browse other questions tagged multithreading sorting parallel-processing julia or ask your own question.

1939
How do I sort a list of dictionaries by a value of the dictionary?
1651
Sort a Map<Key, Value> by values
3420
How do I sort a dictionary by value?
1093
What is the difference between concurrency and parallelism?
2826
Sort array of objects by string property value
1335
How to sort a dataframe by multiple column(s)
1277
How to Sort a List<T> by a property in the object
1917
C++11 introduced a standardized memory model. What does it mean? And how is it going to affect C++ programming?
3927
How can I pair socks from a pile efficiently?
931
Swift Beta performance: sorting arrays