How does OAuth 2 protect against things like replay attacks using the Security Token?

As I understand it, the following chain of events occurs in OAuth 2 in order for Site-A to access User's information from Site-B.

How does all of this work in terms of security and encryption, on a high level? How does OAuth 2 protect against things like replay attacks using the Security Token?

I was driving by Olaf's bakery on my way to work when I saw the most delicious donut in the window -- I mean, the thing was dripping chocolatey goodness. So I went inside and demanded "I must have that donut!". He said "sure that will be $30."

Yeah I know, $30 for one donut! It must be delicious! I reached for my wallet when suddenly I heard the chef yell "NO! No donut for you". I asked: why? He said he only accepts bank transfers.

Seriously? Yep, he was serious. I almost walked away right there, but then the donut called out to me: "Eat me, I'm delicious...". Who am I to disobey orders from a donut? I said ok.

He handed me a note with his name on it (the chef, not the donut): "Tell them Olaf sent you". His name was already on the note, so I don't know what the point of saying that was, but ok.

I drove an hour and a half to my bank. I handed the note to the teller; I told her Olaf sent me. She gave me one of those looks, the kind that says, "I can read".

She took my note, asked for my id, asked me how much money was ok to give him. I told her $30 dollars. She did some scribbling and handed me another note. This one had a bunch of numbers on it, I guessed that's how they keep track of the notes.

At that point I'm starving. I rushed out of there, an hour and a half later I was back, standing in front of Olaf with my note extended. He took it, looked it over and said, "I'll be back".

I thought he was getting my donut, but after 30 minutes I started to get suspicious. So I asked the guy behind the counter "Where's Olaf?". He said "He went to get money". "What do you mean?". "He take note to bank".

It must have taken me a long time to figure that out because by the time I looked up, Olaf was standing in front of me finally handing me my donut. Before I left I had to ask, "Olaf, did you always sell donuts this way?". "No, I used to do it different."

Huh. As I was walking back to my car my phone rang. I didn't bother answering, it was probably my job calling to fire me, my boss is such a ***. Besides, I was caught up thinking about the process I just went through.

I mean think about it: I was able to let Olaf take $30 out of my bank account without having to give him my account information. And I didn't have to worry that he would take out too much money because I already told the bank he was only allowed to take $30. And the bank knew he was the right guy because he had the note they gave me to give to Olaf.

Ok, sure I would rather hand him $30 from my pocket. But now that he had that note I could just tell the bank to let him take $30 every week, then I could just show up at the bakery and I didn't have to go to the bank anymore. I could even order the donut by phone if I wanted to.

Of course I'd never do that -- that donut was disgusting.

I wonder if this approach has broader applications. He mentioned this was his second approach, I could call it Olaf 2.0. Anyway I better get home, I gotta start looking for a new job. But not before I get one of those strawberry shakes from that new place across town, I need something to wash away the taste of that donut.

Based on what I've read, this is how it all works:

The general flow outlined in the question is correct. In step 2, User X is authenticated, and is also authorizing Site A's access to User X's information on Site B. In step 4, the site passes its Secret back to Site B, authenticating itself, as well as the Authorization Code, indicating what it's asking for (User X's access token).

Overall, OAuth 2 actually is a very simple security model, and encryption never comes directly into play. Instead, both the Secret and the Security Token are essentially passwords, and the whole thing is secured only by the security of the https connection.

OAuth 2 has no protection against replay attacks of the Security Token or the Secret. Instead, it relies entirely on Site B being responsible with these items and not letting them get out, and on them being sent over https while in transit (https will protect URL parameters).

Here is a use case demo:

Below is a flowchart of the example above: 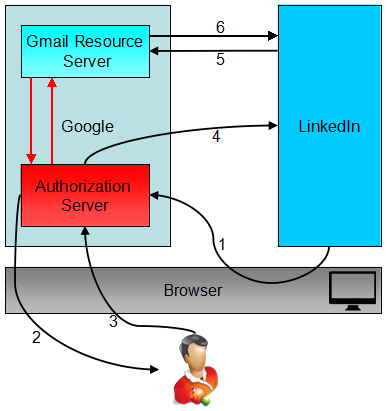 Step 2: The Gmail authorization server authenticates the resource owner and shows the user the consent page. (the user needs to login to Gmail if they are not already logged-in)

Step 3: User grants the request for LinkedIn to access the Gmail data.

Step 4: the Gmail authorization server responds back with an access token.

Step 5: LinkedIn calls the Gmail API with this access token.

You can get more from details about OAuth here.

This is how Oauth 2.0 works, well explained in this article 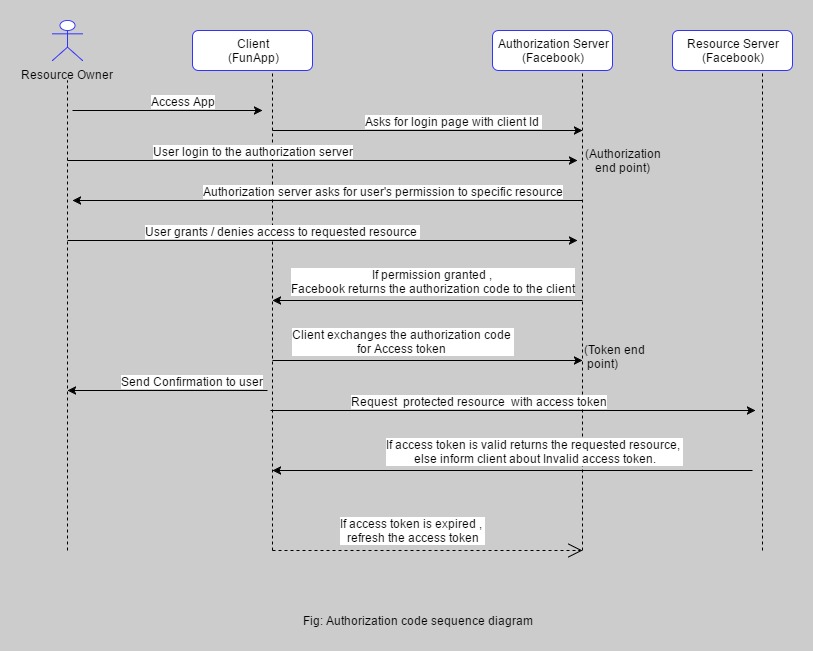 This is a gem:

You (Resource Owner) have a mobile phone. You have several different email accounts, but you want all your email accounts in one app, so you don't need to keep switching. So your GMail (Client) asks for access (via Yahoo's Authorization Server) to your Yahoo emails (Resource Server) so you can read both emails on your GMail application.

The reason OAuth exists is because it is unsecure for GMail to store your Yahoo username and password. 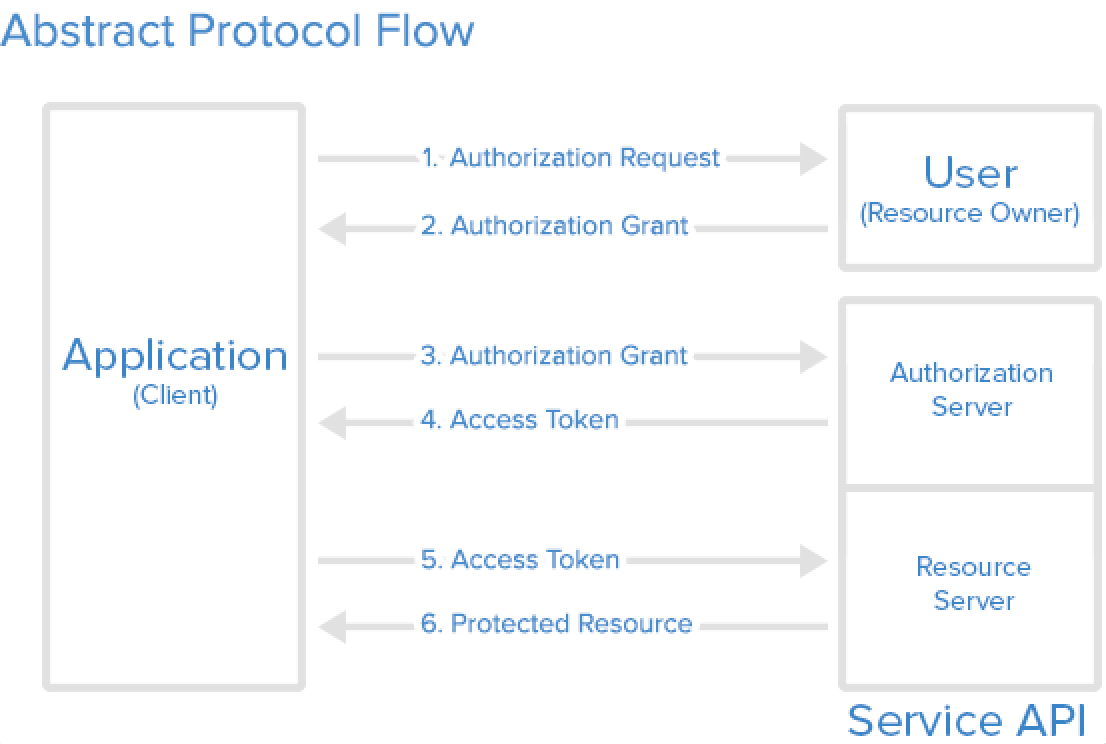 The other answer is very detailed and addresses the bulk of the questions raised by the OP.

To elaborate, and specifically to address the OP's question of "How does OAuth 2 protect against things like replay attacks using the Security Token?", there are two additional protections in the official recommendations for implementing OAuth 2:

A short expiration time for tokens is a means of protection against the following threats:

2) When the token is used by Site A, the recommendation is that it will be presented not as URL parameters but in the Authorization request header field (http://tools.ietf.org/html/rfc6750):

The "application/x-www-form-urlencoded" method SHOULD NOT be used except in application contexts where participating browsers do not have access to the "Authorization" request header field. ...

URI Query Parameter... is included to document current use; its use is not recommended, due to its security deficiencies

Here is perhaps the simplest explanation of how OAuth2 works for all 4 grant types, i.e., 4 different flows where the app can acquire the access token.

All grant type flows have 2 parts:

The 1st part of the flow 'get access token' for each grant type varies.

However, in general the 'get access token' part can be summarized as consisting 5 steps:

Here is a side-by-side diagram comparing how each grant type flow is different based on the 5 steps.

This diagram is from https://blog.oauth.io/introduction-oauth2-flow-diagrams/ 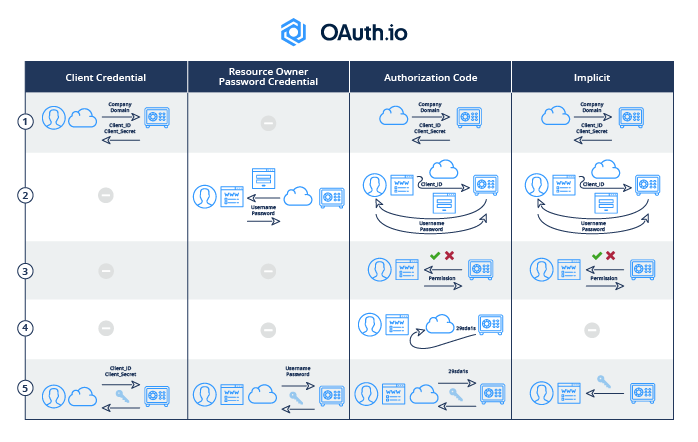 Each have different levels of implementation difficulty, security, and uses cases. Depending on your needs and situation, you will have to use one of them. Which to use?

Client Credential: If your app is only serving a single user

Resource Owner Password Crendential: This should be used only as last resort as the user has to hand over his credentials to the app, which means the app can do everything the user can

Implicit: If you app is mobile or single-page app

There is more explanation of the choice here: https://blog.oauth.io/choose-oauth2-flow-grant-types-for-app/

Not the answer you're looking for? Browse other questions tagged oauth-2.0 or ask your own question.

6
PHP - Storing password for external service securely?
11
How important is it to keep OAuth's access token secret?
4
What is the workflow to implement the custom authentication in Firebase?
3
OAuth2 process and best practices for private apps
5
Example Spring Social OAuth2
1
Does it needs to pass username:password combination in any request with basic auth?
2
How oAuth 2 works?
0
Oauth2 for Aurelia hosted in asp .net core
0
Create Auth0 user
1
In Oauth2 where are the resources that the resource owner owns?
See more linked questions

82
OAuth v2 communication between authentication and resource server
262
What is the purpose of the implicit grant authorization type in OAuth 2?
262
OAuth 2.0: Benefits and use cases — why?
1
OAuth - How is it secure?
0
grails-spring-security-oauth2-provider ClientCredentials filter no processing /oauth/token
2
Spring Security + OAuth, fallback if access token absent
156
Using an authorization header with Fetch in React Native
2
How oAuth 2 works?
1
How does OAuth 2.0 protect against compromised accounts?