Stereo Display (non head-mounted) option in Unity 2017.2 is not available?

I would like to know the where to enable option for 'Stereo Display (non head-mounted)' in Unity 2017.2. I was using this for nvdia 3D vision stereo and it was present until 2017.1. I have checked with unity's documentation regarding that it does not mention anything about it. This option was available in player settings of unity 2017.1 and 5.6 by enabling Virtual Reality-> And in virtual reality SDK's. Since the VR settings are now moved to XR section in player settings as you can see the below images 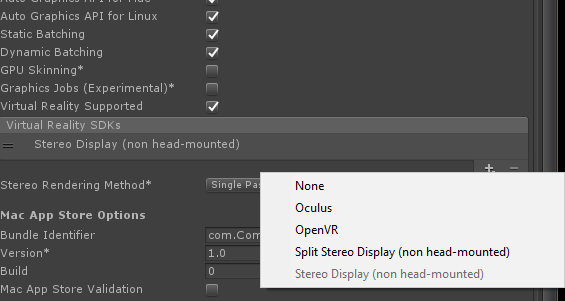 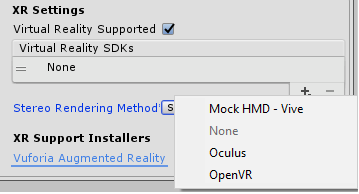 I cannot seem to find it anymore. Also the Unity's release blog does not mention anything about removing it so not sure where exactly it is. So if anyone has information regarding enabling stereo display in 2017.2 it would be helpful. If also want to know by scripting is it possible to change the player settings to include "Stereo Display" option it as I had scripts for changing player settings for using rendering API like directx11 and openGL while making builds so Iam pretty sure this will also have it but I'm unsure where to look for this and how to add it.

The Missing part 'Stereo Display (non head-mounted)' is most probably a bug as I had found a similer thread in Unity forums and got two ways to add stereo sdk to the build. One by turning on

Another solution was to add

And obviously you will have to turn on virtual reality flag in player settings on. You will see this

Even though it says '(missing from build)' it works when you run the exe.User mikewarren on the linked thread mentioned that this is a bug in unity as it does not display stereo even though it is available which I also think so. Finally when running unity build you will be able to see stereo3D option if your resolution dialog is enabled. If not try with the command line

which will make the unity render it in stereo mode both worked for me. For now Iam satisfied with this. Hope this helps others also :).

When in doubt about a missing feature, check the final release note.

XR: Added support for certain aspects of the Vive HMD to be simulated in-Editor without the need of a physical HMD. To enable this, use the "Mock HMD - Vive" virtual reality SDK in the Player Settings. The mock HMD uses the same asymmetric projection matrix, hidden occlusion mesh, field of view, aspect ratio, and eye texture size as the Vive. You can use mock HMD with both multi and single pass rendering paths. It renders as a split-screen stereo display in the Editor.

XR: Certain aspects of the Vive HMD can be simulated in Editor, without the need of a physical HMD, using the "Mock HMD - Vive" virtual reality SDK in the player settings. The mock HMD will use the same asymmetric projection matrix, hidden occlusion mesh, field of view, aspect ratio, and eye texture size as the Vive. Mock HMD can be used with both multi and single pass rendering paths. Mock HMD will render as a split screen stereo display in Editor.

Not the answer you're looking for? Browse other questions tagged unity3d or ask your own question.