What Happens to Non-Awaited Tasks In Try/Catch Block

What happens when a method returns a Task that is contained in a try/catch block? If that non-awaited Task throws an exception, is the exception caught/handled?

For example, if DoSomethingAsync() throws an exception, can I handle it in the try/catch block in TryCatchMethod()?

If DoSomethingAsync throws an exception, the exception is caught. If it returns a faulted task, instead of throwing, then there is no exception to catch until you try to get the task's result (by awaiting it). Since you don't do that in your try block, it won't run your catch block.

No, the try/catch block in TryCatchMethod() will not catch an exception if one occurs in DoSomethingAsync() because of 2 reasons:

Note: .GetAwaiter().GetResult() is not recommended because it will lock the current thread.

To understand why the try/catch block doesn't catch the exception, it's important to first understand how the compiler generates IL code for an async method.

The compiler transforms an async method into an IAsyncStateMachine class which allows the .NET Runtime to "remember" what the method has accomplished. 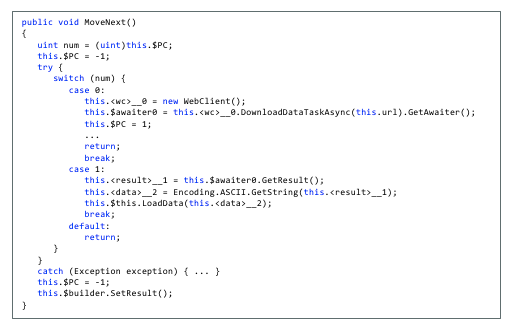 The IAsyncStateMachine interface implements MoveNext(), a method that executes everytime the await operator is used inside of the async method.

MoveNext() essentially runs your code until it reaches an await statement, then it returns while the await'd method executes. This is the mechanism that allows the current method to "pause", yielding its thread execution to another thread/Task.

Look closely at MoveNext(); notice that it is wrapped in a try/catch block.

Because the compiler creates IAsyncStateMachine for every async method and MoveNext() is always wrapped in a try/catch, every exception thrown inside of an async method is caught!

How to Rethrow an Exception Caught By MoveNext

Now the question becomes, if every async method catches every exception thrown, How can I rethrow the exception?

There are a few ways to rethrow exceptions that are thrown in an async method:

The await keyword is preferred because await allows the Task to run asynchronously on a different thread, and it will not lock-up the current thread.

What About .Result or .Wait()?

The exception is thrown when the task is awaited. The compiler generated code when a task is awaited with the await key word cleverly unwraps the exceptions and throws them how you would expect with a reasonably sensible stack trace. It is also thrown if you access the result of the task or call wait but it's then thrown as an aggregate exception and this isn't the best practice. If you never await the task the exception eventually becomes an unoberserved task exception and can be fatal to your program and also has a rubbish stack trace

Exception will be thrown when you access result of task execution with await task, task.Result or task Wait().

Not the answer you're looking for? Browse other questions tagged c# async-await or ask your own question.

134
Is it bad practice to return from within a try catch finally block?
126
C# catch a stack overflow exception
1565
Try-catch speeding up my code?
388
How to safely call an async method in C# without await
328
Do you have to put Task.Run in a method to make it async?
315
What is the difference between asynchronous programming and multithreading?
334
ASP.NET Core Web API exception handling
31
Task.WhenAny - What happens with remaining running tasks?
37
Find non-awaited async method calls