When using Firebase Performance in Android Studio the gradle task app:transformClassesWithFirebasePerformancePluginForDebug is taking significantly longer than any other task and is therefore dramatically slowing down my gradle build times.

Firebase in our project caused 40% build time increase. To speed up debug builds we added a possibility to switch it on/off using build parameters in app/build.gradle and root build.gradle files:

when running from the command line use

when working from Android Studio, add the flag to compiler options: 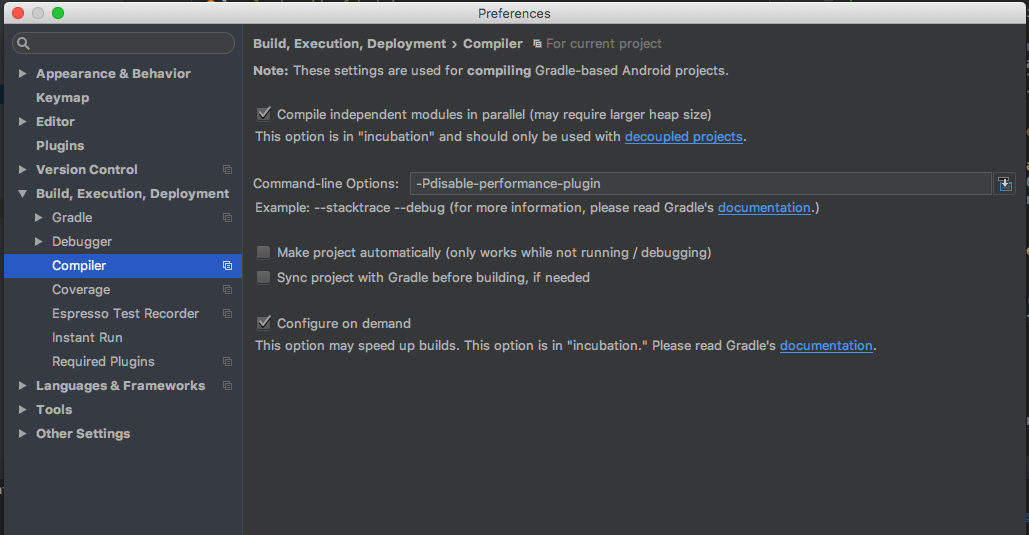 All of the existing answers are valid, but they all miss something.

To deal with this issue, you have 2 major options to choose from.

This is the official way provided by the SDK itself to disable it during the build process.

I think it's much easier to only enable plugin in those rare cases when we need it (usually it will be only when we publish the app) rather than disable it in all other cases.

Note: Of course, with manual builds you might forget to enable it. So if you don't have CI, it might be worth adding some other automatic scripting in Gradle, or sticking to the opposite approach that is used in other answers.

In general though, we only need two steps:

This approach has similar points and warnings, and also includes two steps:

If you don't use custom traces or any other features from Firebase Performance SDK and only rely on automatic monitoring (that is, you don't have any dependencies on SDK in your code), then you can exclude this dependency for non-production builds.

All you need to do is update your app module's build.gradle file:

You can also check out my article where I expand a bit more on this topic.

All comments in this thread are valid. I want to suggest a very simple way to disable that for debug builds:

Just to give another option to disable transformClassesWithFirebasePerformancePluginForDebug, here's my recipe:

In the build.gradle app file:

I ran into this problem as well. Originally we had been using a variant of the answer provided by R. Zagórski, but based on a similar thread from the Gradle forums it seems like conditionally applying a plugin to a project isn't the right way to go:

Plugins can’t be applied to only “part of your project”. They are either applied or not.

Conditionally applying plugins does seem to work if you can do it right, but it's not an officially supported feature. Further down the same thread, another point is made:

But the plugin should allow you to configure it at a finer grained level.

Sure enough, there actually is a property exposed by the Firebase plugin that lets you toggle instrumentation on or off (therefore toggling the increased build time). Using this property is tricky, though, since you have to apply it at exactly the right time during the building process, but once you've got that then you can essentially pivot it on whatever you want.

The following code snippet is how we're pivoting instrumentation based on Debug vs. Non-Debug build variants. It's written in Kotlin, but I imagine it would translate to Groovy just as well:

Note that with this in place, the transformClassesWithFirebasePerformancePluginFor* task will still always run for every build variant, but it will complete almost immediately for a variant that doesn't have instrumentation enabled.

For newer versions of the Firebase perf plugin (1.3.0 and up) with Kotlin DSL you'll need to add the following:

For the Groovy version you can check out the Firebase documentation.

Not the answer you're looking for?Browse other questions tagged java android firebase android-gradle-plugin firebase-performance or ask your own question.