Chromedriver is not being found in python, windows Anaconda

I have freshly installed Chrome on my pc. I have installed Anaconda. I have tried putting Chrome in the Anaconda directory wtih Chrome.

I've got a clean Anaconda, I've installed chromedriver through Anaconda, as well as downloaded it and tried it through Cmd. I also have tried just about every relevant folder I can think of but it just can't seem to find path. I've deleted every visible Chromedriver in case it's getting that.

Any idea on how to fix this issue as I've spent the better half of 4 hours attempting to get Python to stop creating issues.

The last time I did this was 4 months ago and I remember a similar headache.

You need to specify the path of the executable.

selenium.common.exceptions.WebDriverException: Message: 'chromedriver' executable needs to be in PATH 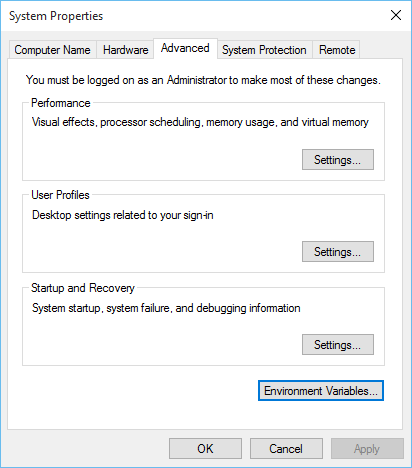 The other option is to set up a environment before running python from CMD:

What this does is sets the variable named path to the value of the previous variable %PATH% and adds another dir to the end. This is only set locally in the sesion of your cmd window, if you close it, it goes away.

This method and the method a2mky sugested are the preferred methods over the system settings.

Personally I use driver = webdriver.Chrome(executable_path=r"C:\Chrome\chromedriver.exe")

I wanted to add this answer to clarify the error message and the next time you see it, makes sense to you.

Your best friend in case of errors, are the error messages.

The simplest solution is to install chromedriver like this:

Then at the top of your code, add the following import statement to update your PATH variable appropriately:

883
pip install mysql-python fails with EnvironmentError: mysql_config not found
552
mysql_config not found when installing mysqldb python interface
1014
pg_config executable not found
0
selenium.common.exceptions.WebDriverException: Message: Can not connect to the 'chromedriver' error when using Python3 on Windows OS
0
Chromedriver working in path but not with selenium (python)
0
how do you fix the executable error with chromedriver Windows >>> in a transition to Ubuntu?
2
selenium.common.exceptions.WebDriverException: Message: Can not connect to the Service error using ChromeDriver Chrome through Selenium Python
0
Chromedriver setup in Selenium (Python - Spyder)