Should I choose x86_64 for testing rather than the "recommended" x86 for virtual device system image?

I'm totally new to Android programming. I have Android Studio 3.0.1 running on Kubuntu Xenial 64-bit on a desktop with a Haswell processor.

I am configuring virtual devices. I am thinking of doing that corresponding to the physical Android devices I own. However, I notice that x86 images are placed in the "Recommended" pane: 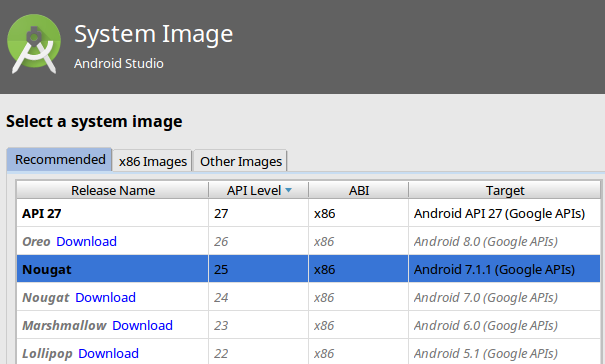 compared to the x86_64 images of identical API version and target:

#4 of https://developer.android.com/studio/run/managing-avds.html#createavd seems to indicate that x86 images are recommended because they "run the fastest in the emulator."

A few of my old devices are x86 but the newer ones are x86_64. Should I choose x86_64 accordingly though it is not in the "Recommended" pane?

Does this make a difference when I am going to distribute APKs on Google Play Store in the future?

and according with this article

Intel 64-bit CPUs have a 32-bit compatibility mode. While 32-bit applications will run on 64-bit processors, compiling with a 64-bit optimizing compiler allows them to take advantage of the architectural benefits of a 64-bit environment.

Android with 64-bit technologies for Intel Atom processor-based platforms can help developers to optimize their applications now. Building Android applications for 64-bit is just as easy as building traditional 32-bit Android applications. You can now use the official Android 64-bit emulator to run and debug 64-bit apps.

Maybe this articles can help you to understand the difference between this system images.

The difference is that when using x86 images, it now uses fast, hardware-accelerated virtualization under the right conditions (HAXM) so it doesn't feel like there's a fat middle layer anymore.

Not the answer you're looking for? Browse other questions tagged android android-studio-3.0 or ask your own question.