Why is var not deprecated?

Lately after ES6 released, many sources suggested that I use "const" and "let" instead of "var", and that I should stop using "var" in my JavaScript.

What I wonder is, if "var" has no advantage over "let" in all points of view, then why didn't they just fix var, or even deprecate "var" instead of letting them go along side each other?

You're right in saying there is no real advantage to using var over let - if you define them at the start of a function their meaning is basically identical.

You're right that there is no real reason to write new code using var (except maybe this, if relevant).

There are pages on the internet that are decades old though, and no one is going to rewrite them. There is nothing really to gain by removing var from the language. For languages like HTML and Javascript that are interpreted - backward compatability is absolutely mandatory.

That is also why they chose not to simply redefine var. Take the following example code;

If var was changed to behave like let then the console.log would cause a reference error because of the scope difference.

I believe sometimes you need to redeclare a variable to write less code.

One example is this function that generates a unique id:

Here I declare id variable simply inside do block and it get's "hoisted" to the function scope. That would cause an error if I used let, because while block wouldn't see the variable from the do block. Of course I could declate let before do..while, but that would create the same function scoped variable with extra line of code.

Another example is when you copypaste code to devtools console and every time variables get redeclared.

One more example. What if you want to keep your variable declarations close to their usages but still treat them as function globals? If you use let in this fashion, you'll get rather confusing expirience in dev tools (all those Block, Block scopes). 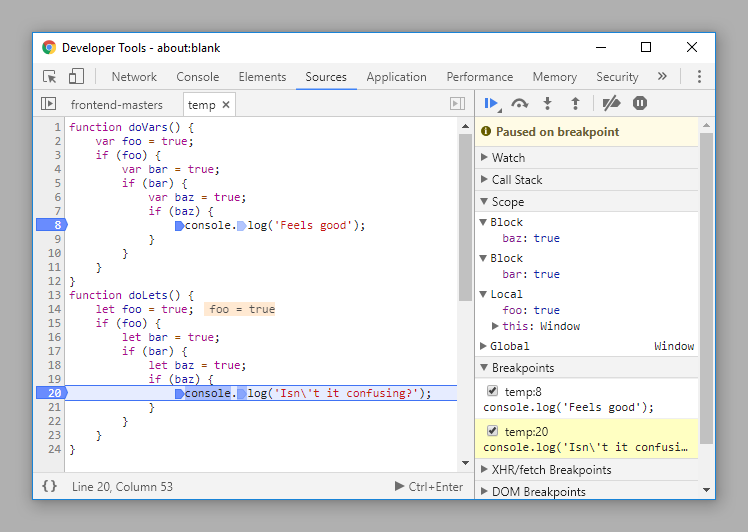 But var 'keeps' them together in one 'Local' list: 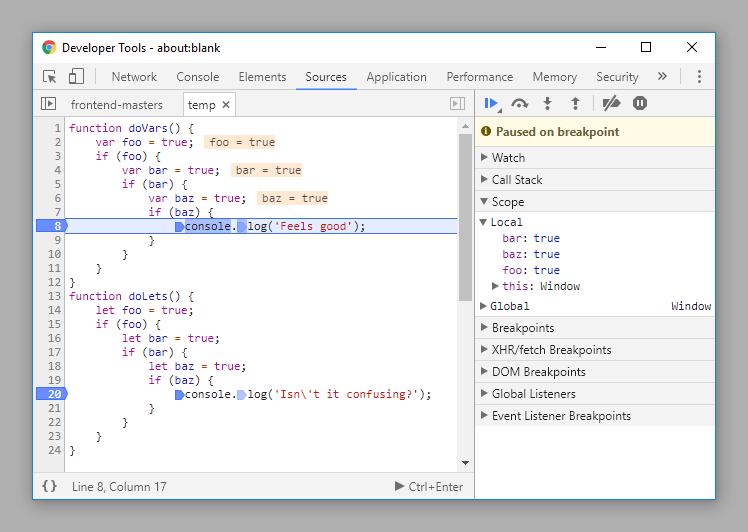 Everything has their own advantages and disadvantages using var const and let is dependent on their use cases.

The let statement allows you to create a variable with the scope limited to the block on which it is used.

I hope you understand.

Not the answer you're looking for? Browse other questions tagged javascript ecmascript-6 deprecated var let or ask your own question.

1
Why would "var" be used instead of "let"?
304
Are variables declared with let or const hoisted?
45
Browser: Identifier X has already been declared
17
What is the use case for var in ES6?