I am trying to come up with a generalised way in Python to identify pitch rotations occurring during a set of planned spacecraft manoeuvres. You could think of it as a particular case of a shift detection problem. 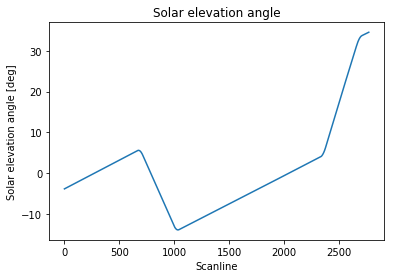 The scanline is my time dimension. The four points where the slope changes identify the spacecraft pitch rotations.

As you can see, the solar elevation angle evolution outside the spacecraft manoeuvres regions is pretty much linear as a function of time, and that should always be the case for this particular spacecraft (except for major failures).

Note that during each spacecraft manoeuvre, the slope change is obviously continuous, although discretised in my set of angle values. That means: for each manoeuvre, it does not really make sense to try to locate a single scanline where a manoeuvre has taken place. My goal is rather to identify, for each manoeuvre, a "representative" scanline in the range of scanlines defining the interval of time where the manoeuvre occurred (e.g. middle value, or left boundary).

Once I get a set of "representative" scanline indexes where all manoeuvres have taken place, I could then use those indexes for rough estimations of manoeuvres durations, or to automatically place labels on the plot.

My solution so far has been to: 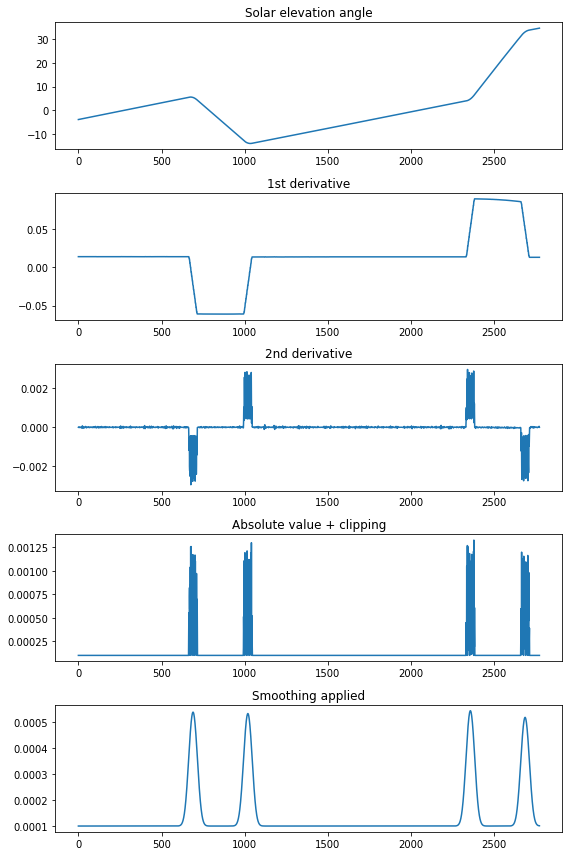 I can then easily identify the local maxima by using scipy's argrelmax function:

Which correctly identifies the scanline indexes I was looking for: 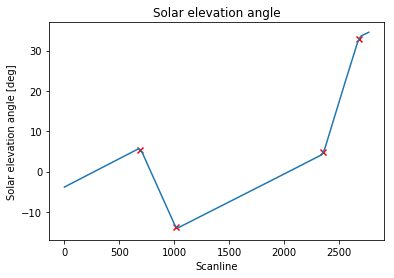 My question is: Is there a better way to approach this problem?
I find that having to manually specify the clipping threshold values to get rid of the noise and the sigma in the gaussian filter weakens this approach considerably, preventing it to be applied to other similar cases.

First improvement would be to use a Savitzky-Golay filter to find the derivative in a less noisy way. For example, it can fit a parabola (in the sense of least squares) to each data slice of certain size, and then take the second derivative of that parabola. The result is much nicer than just taking 2nd order difference with gradient. Here it is with window size 101: 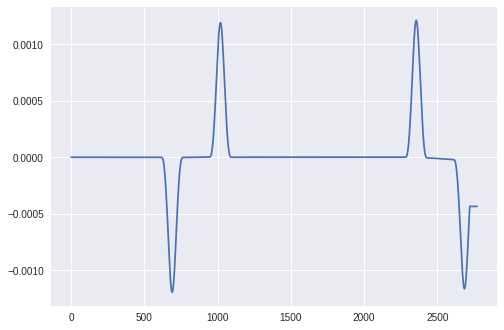 Second, instead of looking for points of maximum with argrelmax it is better to look for places where the second derivative is large; for example, at least half its maximal size. This will of course return many indexes, but we can then look at the gaps between those indexes to identify where each peak begins and ends. The midpoint of the peak is then easily found.

Here is the complete code. The only parameter is window size, which is set to 101. The approach is robust; the size 21 or 201 gives essentially the same outcome (it must be odd).

This is an alternative (not necessarily better) approach, which does not use derivatives: fit a smoothing spline of degree 1 (i.e., a piecewise linear curve), and notice where its knots are.

First, normalize the data (which I call y instead of solar_elevation_angle) to have standard deviation 1.

The first step is to build a piecewise linear curve that deviates from the data by at most the given threshold, arbitrarily set to 0.1 (no units here because y was normalized). This is done by calling UnivariateSpline repeatedly, starting with a large smoothing parameter and gradually reducing it until the curve fits. (Unfortunately, one can't simply pass in the desired uniform error bound).

So far we found the knots, and noted the values of the spline at those knots. But not all of these knots are really important. To test the importance of each knot, I remove it and interpolate without it. If the new interpolant is substantially different from the old (doubling the error), the knot is considered important and is added to the list of found slope changes. 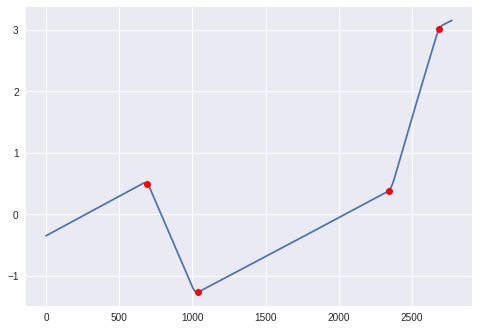 Ideally, one would fit piecewise linear functions to given data, increasing the number of knots until adding one more does not bring "substantial" improvement. The above is a crude approximation of that with SciPy tools, but far from best possible. I don't know of any off-the-shelf piecewise linear model selection tool in Python.

Not the answer you're looking for? Browse other questions tagged python numpy scipy signal-processing or ask your own question.

336
How do I check which version of NumPy I'm using?
126
binning data in python with scipy/numpy
272
Relationship between SciPy and NumPy
137
How to check BLAS/LAPACK linkage in NumPy and SciPy?
161
Installing SciPy and NumPy using pip
142
Confusion between numpy, scipy, matplotlib and pylab
174
How to calculate rolling / moving average using python + NumPy / SciPy?
65
python numpy/scipy curve fitting
71
Factorial in numpy and scipy