Readability aside, are there any discernable differences (performance perhaps) between using

I personally prefer match (and regexp) but colleagues seem to go the other way. We were wondering if it mattered ...?

I should have said at the outset that this is for functions that will be doing partial plain-string matching (to pick up identifiers in class attributes for JQuery) rather than full regexp searches with wildcards etc.

So it's the difference between:

RegExp is indeed slower than indexOf (you can see it here), though normally this shouldn't be an issue. With RegExp, you also have to make sure the string is properly escaped, which is an extra thing to think about.

Both of those issues aside, if two tools do exactly what you need them to, why not choose the simpler one?

Your comparison may not be entirely fair. indexOf is used with plain strings and is therefore very fast; match takes a regular expression - of course it may be slower in comparison, but if you want to do a regex match, you won't get far with indexOf. On the other hand, regular expression engines can be optimized, and have been improving in performance in the last years.

In your case, where you're looking for a verbatim string, indexOf should be sufficient. There is still one application for regexes, though: If you need to match entire words and want to avoid matching substrings, then regular expressions give you "word boundary anchors". For example:

will find bar three times in bar, fubar, barmy, whereas

will only match bar when it is not part of a longer word.

As you can see in the comments, some comparisons have been done that show that a regex may be faster than indexOf - if it's performance-critical, you may need to profile your code.

Here all possible ways (relatively) to search for string

Benchmarks seem to be twisted specially for es6 includes , read the comments.

if you don't need the matches. => Either you need regex and so use test. Otherwise es6 includes or indexOf. Still test vs indexOf are close.

And for includes vs indexOf:

They seem to be the same : https://jsperf.com/array-indexof-vs-includes/4 (if it was different it would be wierd, they mostly perform the same except for the differences that they expose check this)

And for my own benchmark test. here it is http://jsben.ch/fFnA0 You can test it (it's browser dependent) [test multiple time] here how it performed (multiple run indexOf and includes one beat the other, and they are close). So they are the same. [here using the same test platform as the article above]. 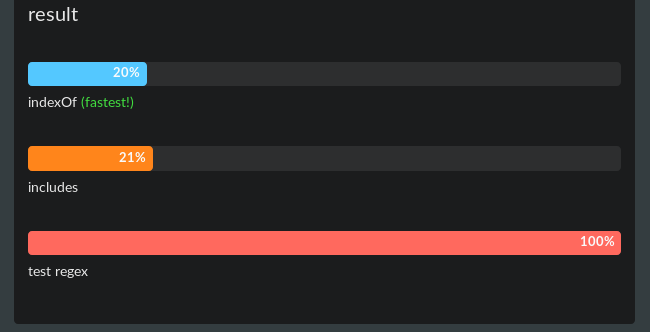 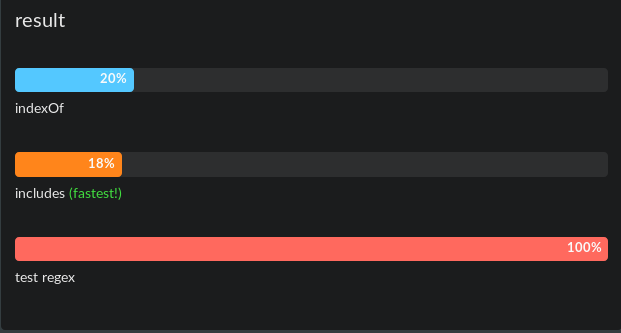 And here for the a long text version (8 times longer) http://jsben.ch/wSBA2 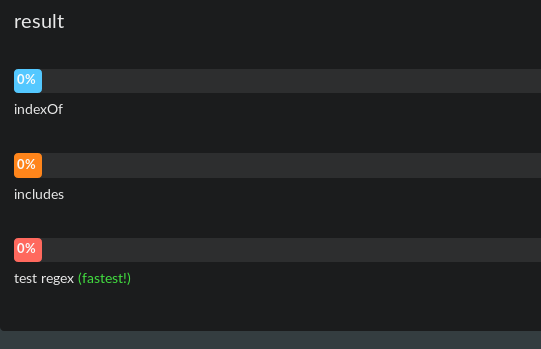 Notice jsben.ch doesn't handle memory overflow (or there limits correctly. It doesn't show any message) so result can get wrong if you add more then 8 text duplication (8 work well). But the conclusion is for very big text all three perform the same way. Otherwise for short indexOf and includes are the same and test a little bit slower. or Can be the same as it seemed in chrome (firefox 60 it is slower).

Notice with jsben.ch: don't freak out if you get inconsistant result. Try different time and see if it's consistent or not. Change browser, sometimes they just run totally wrong. Bug or bad handling of memory. Or something. 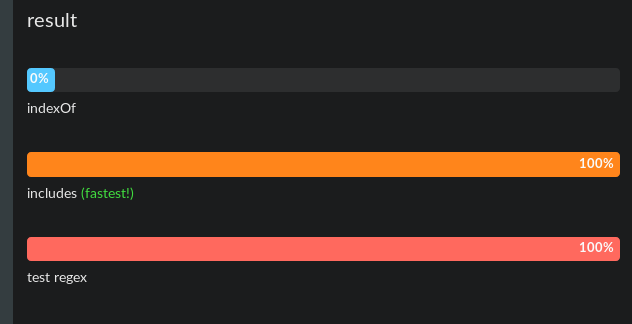 Here too my benchmark on jsperf (better details, and handle graphs for multiple browsers) 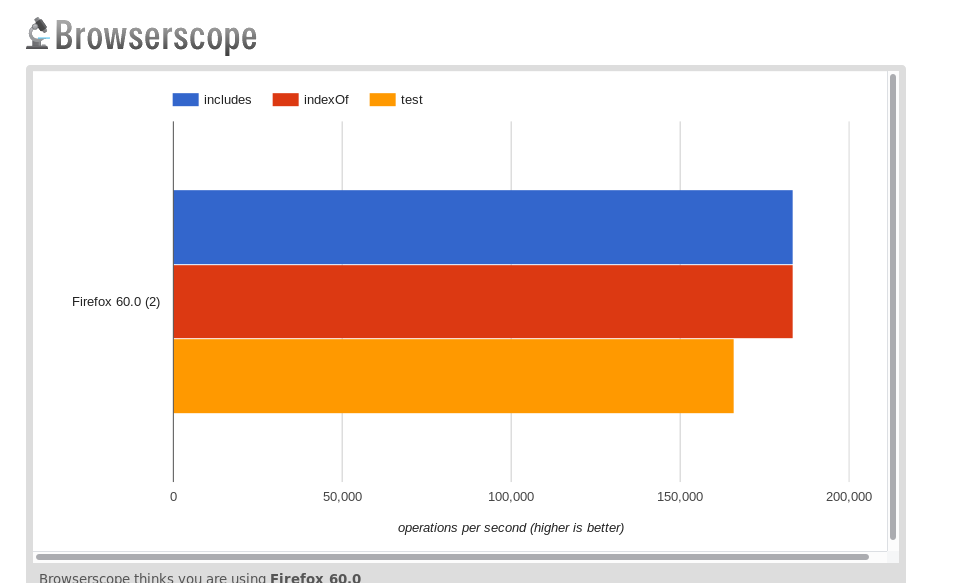 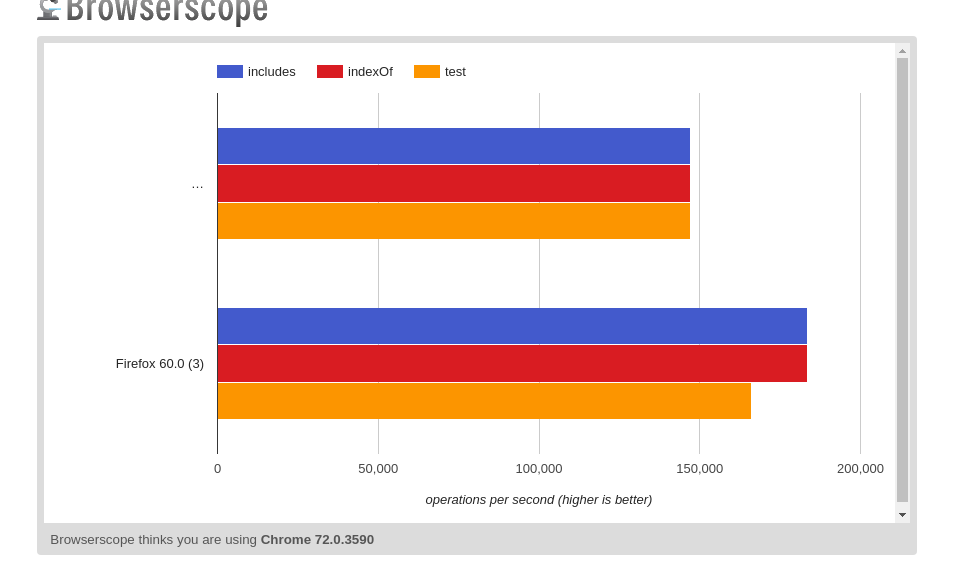 (seem all three perform the same in chrom) 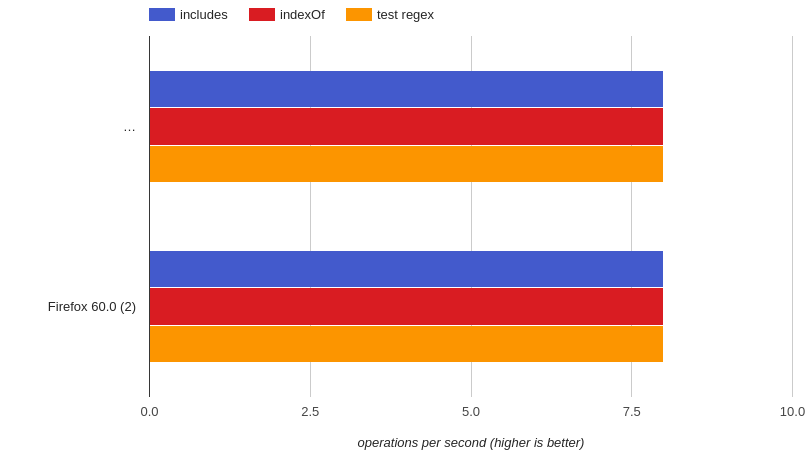 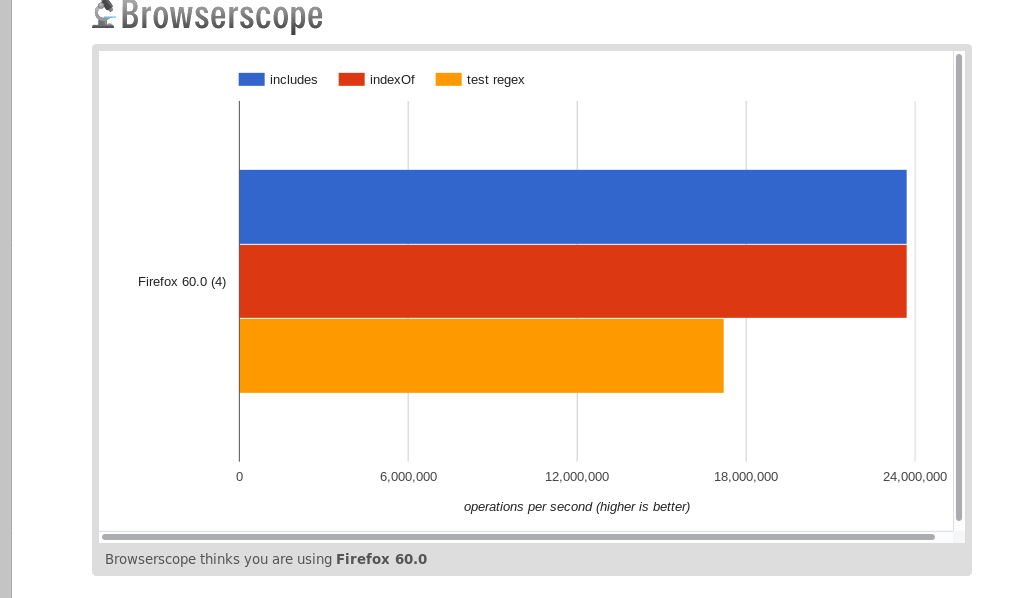 Note: about the benchmark above. For the very short string version (jsperf) had an big error for chrome. Seeing by my eyes. around 60 sample was run for both indexOf and includes same way (repeated a lot of time). And test a little bit less and so slower. don't be fooled with the wrong graph. It's clear wrong. Same test work ok for firefox, surely it's a bug.

Here the illustration: (the first image was the test on firefox) 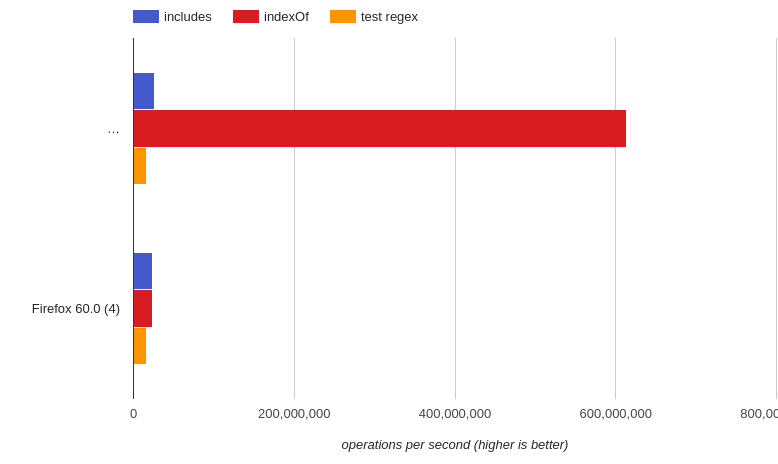 waaaa. Suddenly indexOf became superman. But as i said i did the test, and looked at the number of samples it was around 60. Both indexOf and includes and they performed the same. A bug on jspref. Except for this one (maybe because of a memory restriction related problem) all the rest was consistent, it give more details. And you see how many simple happen in real time.

test => can be slower for short strings or text. And the same for long texts. And it make sense for the overhead that the regex engine add. In chrome it seemed it doesn't matter at all.

You ask whether str.indexOf('target') or str.match(/target/) should be preferred. As other posters have suggested, the use cases and return types of these methods are different. The first asks "where in str can I first find 'target'?" The second asks "does str match the regex and, if so, what are all of the matches for any associated capture groups?"

The issue is that neither one technically is designed to ask the simpler question "does the string contain the substring?" There is something that is explicitly designed to do so:

There are several advantages to using regex.test(string):

Using indexOf should, in theory, be faster than a regex when you're just searching for some plain text, but you should do some comparative benchmarks yourself if you're concerned about performance.

If you prefer match and it's fast enough for your needs then go for it.

For what it's worth, I agree with your colleagues on this: I'd use indexOf when searching for a plain string, and use match etc only when I need the extra functionality provided by regular expressions.

Performance wise indexOf will at the very least be slightly faster than match. It all comes down to the specific implementation. When deciding which to use ask yourself the following question:

Will an integer index suffice or do I need the functionality of a RegExp match result?

The return values are different

Aside from the performance implications, which are addressed by other answers, it is important to note that the return values for each method are different; so the methods cannot merely be substituted without also changing your logic.

The index within the calling String object of the first occurrence of the specified value, starting the search at fromIndex.
Returns -1 if the value is not found.

An Array containing the entire match result and any parentheses-captured matched results.
Returns null if there were no matches.

Because .indexOf returns 0 if the calling string begins with the specified value, a simple truthy test will fail.

…the return values for each would differ:

The correct way to run a truthy test with the return from .indexOf is to test against -1:

remember Internet Explorer 8 doesnt understand indexOf. But if nobody of your users uses ie8 (google analytics would tell you) than omit this answer. possible solution to fix ie8: How to fix Array indexOf() in JavaScript for Internet Explorer browsers

Not the answer you're looking for? Browse other questions tagged javascript regex string client or ask your own question.

296
How to fix Array indexOf() in JavaScript for Internet Explorer browsers
191
Fastest way to check a string contain another substring in JavaScript?
47
How to search for a string inside an array of strings
2
JavaScript performance - .test() vs .search()
0
Javascript: Regex vs IndexOf when scanning for a list of keywords
0
JavaScript search function works great in Chrome, Safari, and Opera, but takes forever in IE and Firefox
-2
Javascript Regex - match int after string in for loop