Given a string of a million numbers, return all repeating 3 digit numbers

I had an interview with a hedge fund company in New York a few months ago and unfortunately, I did not get the internship offer as a data/software engineer. (They also asked the solution to be in Python.)

I pretty much screwed up on the first interview problem...

Question: Given a string of a million numbers (Pi for example), write a function/program that returns all repeating 3 digit numbers and number of repetition greater than 1

They did not give me the solution after I failed the interview, but they did tell me that the time complexity for the solution was constant of 1000 since all the possible outcomes are between:

Now that I'm thinking about it, I don't think it's possible to come up with a constant time algorithm. Is it?

You got off lightly, you probably don't want to be working for a hedge fund where the quants don't understand basic algorithms :-)

There is no way to process an arbitrarily-sized data structure in O(1) if, as in this case, you need to visit every element at least once. The best you can hope for is O(n) in this case, where n is the length of the string.

Although, as an aside, a nominal O(n) algorithm will be O(1) for a fixed input size so, technically, they may have been correct here. However, that's not usually how people use complexity analysis.

It appears to me you could have impressed them in a number of ways.

First, by informing them that it's not possible to do it in O(1), unless you use the "suspect" reasoning given above.

Second, by showing your elite skills by providing Pythonic code such as:

though you could, of course, modify the output format to anything you desire.

And, finally, by telling them there's almost certainly no problem with an O(n) solution, since the code above delivers results for a one-million-digit string in well under half a second. It seems to scale quite linearly as well, since a 10,000,000-character string takes 3.5 seconds and a 100,000,000-character one takes 36 seconds.

And, if they need better than that, there are ways to parallelise this sort of stuff that can greatly speed it up.

Not within a single Python interpreter of course, due to the GIL, but you could split the string into something like (overlap indicated by vv is required to allow proper processing of the boundary areas):

You can farm these out to separate workers and combine the results afterwards.

The splitting of input and combining of output are likely to swamp any saving with small strings (and possibly even million-digit strings) but, for much larger data sets, it may well make a difference. My usual mantra of "measure, don't guess" applies here, of course.

This mantra also applies to other possibilities, such as bypassing Python altogether and using a different language which may be faster.

For example, the following C code, running on the same hardware as the earlier Python code, handles a hundred million digits in 0.6 seconds, roughly the same amount of time as the Python code processed one million. In other words, much faster:

Constant time isn't possible. All 1 million digits need to be looked at at least once, so that is a time complexity of O(n), where n = 1 million in this case.

The simple O(n) solution would be to count each 3-digit number:

This would search through all 1 million digits 1000 times.

Traversing the digits only once:

Timing shows that iterating only once over the index is twice as fast as using count.

A million is small for the answer I give below. Expecting only that you have to be able to run the solution in the interview, without a pause, then The following works in less than two seconds and gives the required result:

Hopefully the interviewer would be looking for use of the standard libraries collections.Counter class.

I wrote a blog post on this with more explanation.

Here is a NumPy implementation of the "consensus" O(n) algorithm: walk through all triplets and bin as you go. The binning is done by upon encountering say "385", adding one to bin[3, 8, 5] which is an O(1) operation. Bins are arranged in a 10x10x10 cube. As the binning is fully vectorized there is no loop in the code.

I would solve the problem as follows:

Applied to your example string, this yields:

This solution runs in O(n) for n being the length of the provided string, and is, I guess, the best you can get.

As per my understanding, you cannot have the solution in a constant time. It will take at least one pass over the million digit number (assuming its a string). You can have a 3-digit rolling iteration over the digits of the million length number and increase the value of hash key by 1 if it already exists or create a new hash key (initialized by value 1) if it doesn't exists already in the dictionary.

You can filter down to the keys which have item value greater than 1.

As mentioned in another answer, you cannot do this algorithm in constant time, because you must look at at least n digits. Linear time is the fastest you can get.

However, the algorithm can be done in O(1) space. You only need to store the counts of each 3 digit number, so you need an array of 1000 entries. You can then stream the number in.

My guess is that either the interviewer misspoke when they gave you the solution, or you misheard "constant time" when they said "constant space."

The array lookup method is very fast (even faster than @paul-panzer's numpy method!). Of course, it cheats since it isn't technicailly finished after it completes, because it's returning a generator. It also doesn't have to check every iteration if the value already exists, which is likely to help a lot. 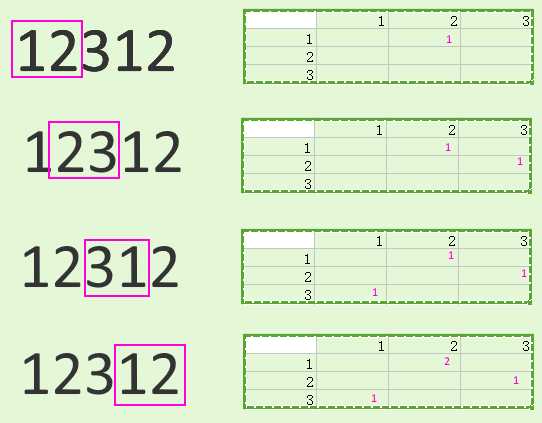 Here is my solution:

With a bit of creativity in for loop(and additional lookup list with True/False/None for example) you should be able to get rid of last line, as you only want to create keys in dict that we visited once up to that point. Hope it helps :)

-Telling from the perspective of C. -You can have an int 3-d array results[10][10][10]; -Go from 0th location to n-4th location, where n being the size of the string array. -On each location, check the current, next and next's next. -Increment the cntr as resutls[current][next][next's next]++; -Print the values of

-It is O(n) time, there is no comparisons involved. -You can run some parallel stuff here by partitioning the array and calculating the matches around the partitions.

Not the answer you're looking for? Browse other questions tagged python algorithm data-structures number-theory or ask your own question.

29
How to implement atoi using SIMD?
2
Time a python 2 function takes to run WITHOUT ANY imports; is it possible?
0
How to count occurrence of substring elements in string in python (even when repeated)?

571
Algorithm to return all combinations of k elements from n
540
How to import a module given its name as string?
1601
How do I check if a string is a number (float)?
951
Count the number occurrences of a character in a string
1333
Random string generation with upper case letters and digits
1146
Easy interview question got harder: given numbers 1..100, find the missing number(s) given exactly k are missing
417
Generating all permutations of a given string
786
Remove all whitespace in a string
726
Sorting 1 million 8-decimal-digit numbers with 1 MB of RAM
2
Shortest string to try all 3 digit lock