Loaded nib but the 'view' outlet was not set

I added a new nib file to my project, and tried to load it.

However, when I click on the toolbar icon that is supposed to take me to the view that I created, I get an NSInternalInconsistencyException with the message:

Terminating app due to uncaught exception 'NSInternalInconsistencyException', reason: '-[UIViewController _loadViewFromNibNamed:bundle:] loaded the "..." nib but the view outlet was not set.'

So I opened up my nib file, and I see for the view that there are no referencing outlets set. However, I try to click and drag the circle for "new referencing outlet" to File's Owner, but it won't let me...what do I need to do to get my view to display?

This is Josh Justice proposal, but in a graphical way (pictures are mine): 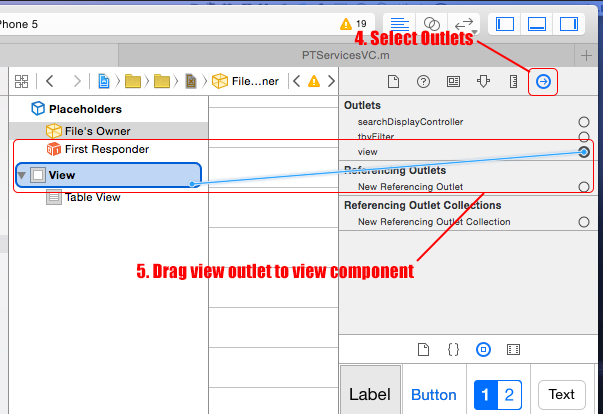 Finally the View Controller is instantiated with the rolling code:

I can generally fix it by remaking the connection between File's Owner and the view. Control-drag from the File's owner to your View (in IB) and select view from the pop-up menu.

The View Identity - Class Identity was not set. After setting it to the appropriate class, the issue was resolved.

Are you sure you have a UIView (or subclass) assigned to the "view" property of yourViewController?

Right click on "File Owner" in the left pane of the xib for yourViewController and verify that the "view" outlet is set. If not, set it to a view!

this will definetly fix the Issue

For me all the things stated here https://stackoverflow.com/a/6395750/939501 were true but still it was throwing error, reason was I created a View class with name ABCView and then deleted it later I added a view controller as ABCViewController so somehow it was referring to old ABCView in new view controller, I had to delete the ABCViewController and add a new one with different name that solved my issue.

I had the same issue with XCode 4.6.3. I had started out with a couple files named MySettingsView.h and .m but deleted them in favor of MySettingsViewController.h, but despite trying most of the hints mentioned here, it still kept erroring with,

2013-07-05 11:48:17.205 MyApp[39024:c07] *** Terminating app due to uncaught exception 'NSInternalInconsistencyException', reason: '-[UIViewController _loadViewFromNibNamed:bundle:] loaded the "MySettingsView" nib but the view outlet was not set.'

It was evidently still "confused", trying to load MySettingsView.xib instead of MySettingsView Controller.xib. Maybe its "do what I mean" logic is too fancy.

So I worked around the problem by hardcoding the NIB/XIB name in MySettingsViewController.m:

I ran into this problem in a slightly different way from the other answers here.

To anyone that is using an xib method to create a UIView and having this problem, you will notice that you won't have the "view" outlet under the connections inspector menu. But if you set the File's Owners custom class to a UIViewController and then you will see the "view" outlet, which you can just CMND connect an outlet to the CustomView.

My issue with this was caused by having a duplicate nib in the class folder that did not have the view set. xcode seemed to be choosing one nib for a build and then the other the next time I built the project. Just deleted the other one. Looks good. Doh!

Based on the 2nd answer chosen above, I decided I should clean my build. Nada, but I was still suspect of XCode (as I have two identical classes, should abstract them but eh...) So one's working, one's not. File's owner names are so far as copy and pasted, outlets rehooked up, xCode rebooted, still nothing.

So I delete the similar named class (which is a view). Soon, new error "outlet inside not hooked up" literally was "webView not key value" blah... basically saying "Visual Studio's better". Anyway... I erase the smaller named file, and bam, it works.

XCode is confused by similar-named files. And the project is large enough to need rebooting a bit, that may be part of it.

Wish I had a more technical answer than "XCode is confused", but well, xCode gets confused a lot at this point. Unconfused it the same way I'd help a little kid. It works now, :) Should benefit others if the above doesn't fix anything.

The previous answers almost solved the problem for me, but the last step was missing.

Now any @IBOutlets you add will be attached.

I had face the same problem while accidentally deleted xib reference and added it again.I just fixed by making connection between Files owner and the view.Also make sure that your FilesOwner's custom class is your expected viewController.

For me, the problem was caused by calling initWithNibName:bundle:. I am using table view cells from a nib file to define entry forms that sit on tableViews. As I don't have a view, doesn't make sense to hook to one. Instead, if I call the initWithStyle: method instead, and from within there, I load the nib file, then things work as expected.

I had the same problem, but a slightly different solution was called for. The problem in this case was the class of the File Owner, rather than the class of the View. To set this, I had to click the "backwards play" icon in the lower left corner of the Interface Builder window, and options then appeared that isolated the characteristics of the File Owner, the First Responder, and the View. Clicking on the first one (a large transparent box), enabled me to then set its custom class as suggested above.

I had the same problem, but a different solution was called for. The problem in this case was the class of the File Owner was not connected to xib file.

I've posted the details in an answer to this similar question.

My problem was in wrong classes. I used custom .xib for my custom view. Correctly it has to be set like here:

Just had the same error in my project, but different reason. In my case I had an IBOutlet setup with the name "View" in my custom UITableViewController class. I knew "view" was special because that is a member of the base class, but I didn't think View (different case) would also be a problem. I guess some areas of Cocoa are not case-sensitive, and probably loading a xib is one of those areas. So I just renamed it to DefaultView and all is good now.

select the files owner and goto open the identity inspecter give the class name to which it corresponds to. If none of the above methods works and still you can't see the view outlet then give new referencing outlet Connection to the File's Owner then you can able to see the view outlet. Click on the view Outlet to make a connection between the View Outlet and File's owner. Run the Application this works fine.

In my case, the view was not viewed in xib. in xib the View was size = none (4th tab right hand). I set size to Freeform and reload xCode. view was appealed and I set the proper link to View.

If you have tried everything and you still get this error, try re-creating the class file from scratch but remember to select the "Also create XIB file" check box. This will auto link up a few items that are not linked when creating these files separately. After this is created, you can likely cut and paste everything onto the new XIB and it should work fine.

I am finding this issue specifically with creating files separately in Swift.

for me it happened, when

Here loadView was missing,,, adding this line resolved my problem.

I had the same problem, I figured out and it is because of i had ticked "Static cells" in the properties of Table View under Content option. Worked when it changed to "Dynamic Prototypes". Screenshot is below. 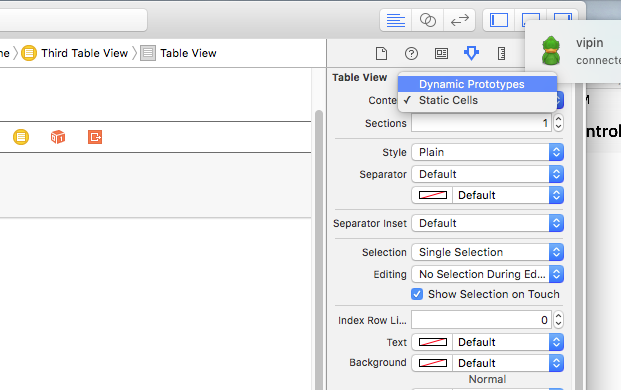 I had a similar problem with Xcode 9.3, and setting "Module" under the "File Owner's" attribute inspector to the project module fixed this for me.

If you're using a custom init method, check that you're returning something valid. I ran into a piece of code that crashed on something like this:

In another class, the controller was created like so:

The problem is that in the init method, self hasn't changed and should look like this instead: