I have the following function calls at several places in my class.

In those lines, I want to search for the following,

And replace them with the following, (by appending WithOptions:[Permissions isOptionsAvailable])

How can I do this using single Regular Expression Find/Replace?

NOTE: The behavior changed in Xcode 6. The \123 syntax was replaced with $123. Also be warned that newlines can now be matched in reg exps so be sure to skim before Replace-Alling

Adding an additional argument to a method:

(below uses new syntax; swap if on Xcode 5 or older)

In other words, this line:

Always did this by hand but in this case, I was adding an OPTIONAL 'animate:' flag, and the default up to this point had been YES, but I wanted NO, so every call had to be updated.

To fix the deprecated dismissModalViewController replacing it with an empty completion block and retaining animated value:

I recently wrote a c library with a bunch of files with the prefix PD and I used Create/Release as malloc/free keywords, which I regretted as it may make people think retain counting is kept, so I wanted to renamePD<anything>Release( with PD<anything>Destroy(.

Since Core Graphics has CGPDFDocumentRelease and similar, I had to ensure the word started with PD as well.

I had stupidly put assertions around functional code that would become empty when !#ifdef DEBUG. Luckily I knew that all of these started with PDAssert(PDScannerPop.... and ended with );.

No $1 here because that would include the PDAssert( again. Note that I've split right after the PDAssert( and am leaving out the ) in ); in the 3rd chunk which removes the surplus parens from removing PDAssert(.

You can match everything except ")" to deal with over-greedy regexp replaces. Example:

The weird sr te rt thing in the center matches both "strong" and "retain".

Somehow I've managed to find the answer (which is enough for my need here) by referring the post: http://www.cocoabuilder.com/archive/xcode/273123-how-to-use-regular-expressions-in-xcode-find-replace.html, and trial and error method.

My Find string is:

And, my Replace string is:

Please post if there is any better way than this..

I was trying to update my answer below for Xcode 8, but I couldn't do it. If you have the answer, please let me know.

The bolded numbers show why a plain Find and Replace won't work.

There are two ways you can do Find and Replace: Textual and Regular Expression

and choose one of them. 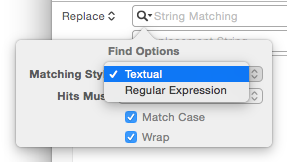 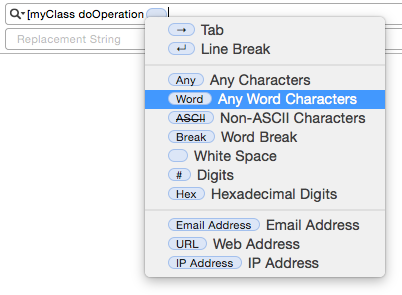 when you use view(.*)Appear to find all viewDidAppear or viewWillAppear

and replaced by args: $1

I can't find anything saying that regular expression capture and replace is supported WITHIN Xcode.

to capture the number. though. that is what the parenthesis are for.

In the current version of Xcode, I believe you can only search using regular expressions. Replace doesn't give you that flexibility. If you only have three methods you want to replace in this manner, I would run search and replace three times. Otherwise, I would modify my source code in BASH using awk or sed.

Not the answer you're looking for? Browse other questions tagged iphone ios objective-c xcode or ask your own question.

47
How can I find and replace inside a selection in Xcode?
18
How do I disable NSLog?
6
(REGEX) Regular Expression to replace all in Xcode 5
1
Find and Replace using patterns in Xcode 8
1
Is there an easy way to replace a deprecated method call in Xcode?