Docker: Got permission denied while trying to connect to the Docker daemon socket at unix:///var/run/docker.sock

I am new to docker. I just tried to use docker in my local machine(Ubuntu 16.04) with Jenkins.

I configured a new job with below pipeline script.

But it fails with this error:

Got permission denied while trying to connect to the Docker daemon socket at unix:///var/run/docker.sock 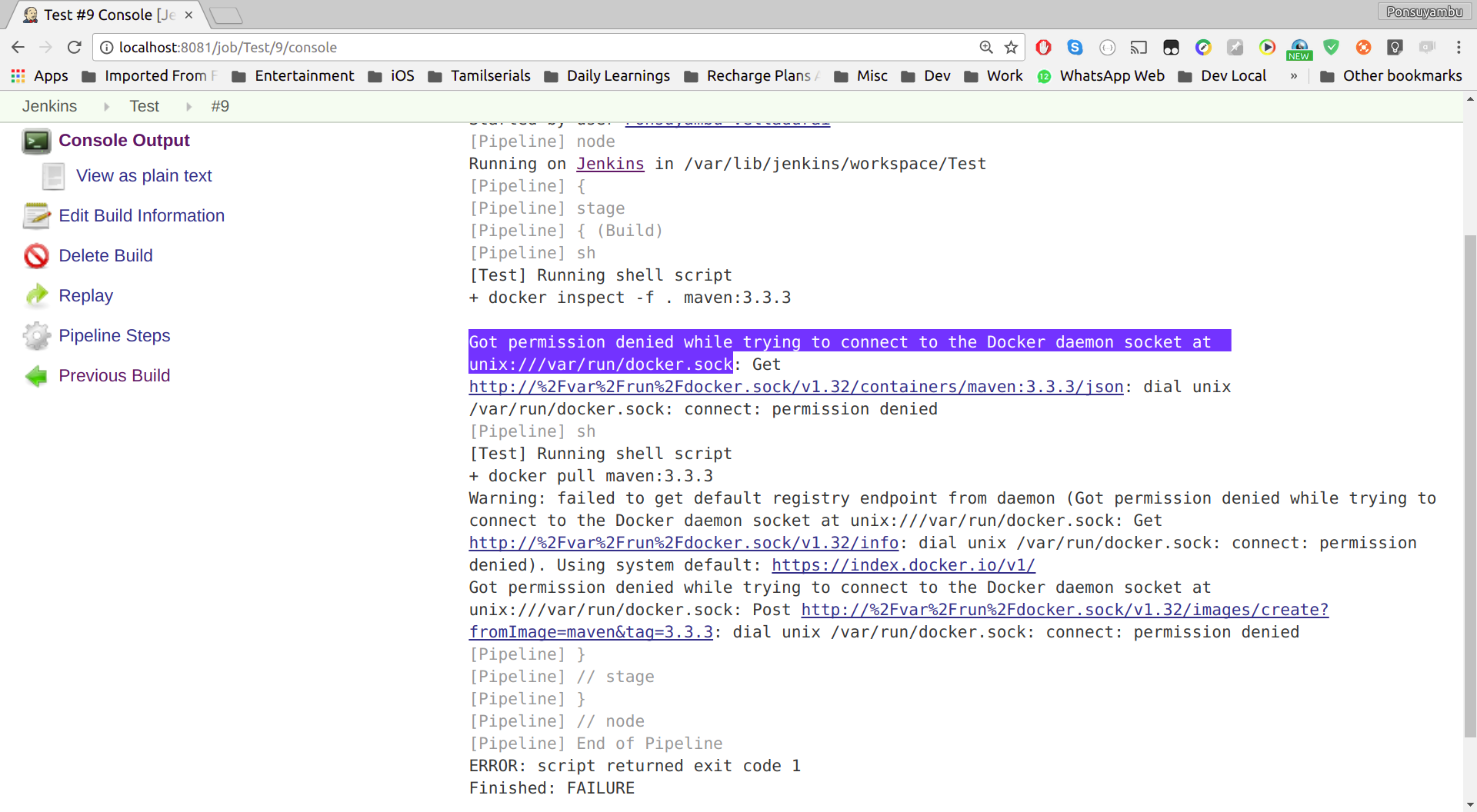 The user jenkins needs to be added to the group docker:

If you arrive to this question of stack overflow because you receive this message from docker, but you don't use jenkins, most probably the error is the same: your unprivileged user does not belong to the docker group.

Insert your user name where [user] is.

You can check it was successful by doing grep docker /etc/group and see something like this:

in one of the lines.

Then change your users group ID to docker (to avoid having to log out and log in again):

My first solutions was:

But none of them work for me, I tried:

That works, but I don't know if it is the right call.

I have been stuck for days on this one and as I haven't found a complete answer with the why and how, I will post one for other people that stumble on the same problem and answers from above do not work.

These are the 3 crucial steps when running Jenkins inside docker:

You can do this as a part of a launch script or simply by using exec and doing it manually: groupmod -g <YOUR_HOST_DOCKER_GID> docker.

Also, do not change permissions of the /var/run/docker.sock to 777 or stuff like that because that is a big security risk, you are basically giving everyone permission to use docker on your machine

or u can use sudo in the start of the command.

To apply the new group membership, log out of the server and back in, or type the following:

You will be prompted to enter your user’s password to continue. Confirm that your user is now added to the docker group by typing:

Don't know what exactly it does but solve the problem.

Simply adding docker as a supplementary group for the jenkins user

is not always enough when using a Docker image as the Jenkins Agent. That is, if your Jenkinsfile starts with pipeline{agent{dockerfile or pipeline{agent{image:

This is because Jenkins performs a docker run command, which results in three problems.

Installing Docker for the Agent

The ideal fix to the third problem would be set up supplementary groups for the Agent. That does not seem possible. The only fix I'm aware of is to run the Agent with the Jenkins UID and the Docker GID (the socket has group write permission and is owned by root.docker). But in general, you do not know what those IDs are (they were allocated when the useradd ... jenkins and groupadd ... docker ran when Jenkins and Docker were installed on the host). And you can not simply tell Jenkins to user user jenkins and group docker

because that tells Docker to use the user and group that are named jenkins and docker within the image, and your Docker image probably does not have the jenkins user and group, and even if it did there would be no guarantee it would have the same UID and GID as the host, and there is similarly no guarantee that the docker GID is the same

Fortunately, Jenkins runs the docker build command for your Dockerfile in a script, so you can do some shell-script magic to pass through that information as Docker build arguments:

Your Dockerfile can use that information to setup a jenkins user and docker group for the Agent, using groupadd, groupmod and useradd:

I faced a similar issue, which is a permission issue and the cause of this issue is because the Docker daemon/server always runs as the root user, and wants you to always preface the docker command with sudo.

Docker daemon binds to a Unix socket instead of a TCP port. By default that Unix socket is owned by the user root and other users can only access it using sudo.

To fix this, here's what worked for me:

Firstly, check if you have a docker group already created:

If you don't find docker in the list that is displayed, then you will need to create one:

Next, confirm your user and your group using the command below:

Scroll through to see the group for docker. It should be of this format

where docker is my group and promisepreston is my user

Now we can add your user to the docker group

Also add your user to the “docker” group, If you would like to use Docker as a non-root user:

Copy and run the command below in your terminal exactly how it is stated without modifying it in any way, regardless of the docker image/container/command that you want to run or are trying to run or is causing the permission issue:

After running the command above, you will need to Log out and log back in so that your group membership is re-evaluated. However, on Linux, you can also run the following command below to activate the changes to groups (Copy and run the command below in your terminal exactly how it is stated without modifying it in any way, regardless of the docker image/container/command that you want to run or are trying to run or is causing the permission issue):

You can now verify that you can run docker commands without sudo permissions, by running the command that is causing the permissions issue again, say (Replace my-command with the name of your image/container/command):

For Docker and Local filesystem files:

If you have a copy of the files on your local filesystem, then you can change the ownership of the application directory where the application files are stored, using this format:

So in my case it will be:

Note: Please run this command inside the parent directory housing the application directory.

Step 1: add your username to the docker group:

Then logout and login again.


P.S If you are interested, the reference is here.

I have Jenkins running in Docker and connected Jenkins is using Docker socket from host machine Ubuntu 16.04 via volume to /var/run/docker.sock.

For me solution was:

664 means - read and write(but not execute) for owner and users from group.

While doing production config i got the permission issue.I tried below solution to resolve the issue.

Solution: permissions of the socket indicated in the error message, /var/run/docker.sock:

After changes permission for docket.sock then execute below command to check permissions.

In my case, it was not only necessary add jenkins user to docker group, but make that group the primary group of the jenkins user.

This worked for me !

No one seem to mention, that according to the official source: https://docs.docker.com/engine/install/linux-postinstall/#manage-docker-as-a-non-root-user - you can just "pre" your command with sudo and it will work without creating users or other manipulations. For example sudo docker pull mongo - this works.

Most of the steps were the same for me as the others has written. However, I was not able to add jenkins to the group docker using usermod with the mentioned solutions.

I tried the following command from the docker host, and from the running docker container:

(I entered to the running docker container with the following command from the docker host:

usermod: user 'jenkins' does not exist

We trust you have received the usual lecture from the local System Administrator. It usually boils down to these three things:

Without the sudo part of the command, in the docker container I received:

Solution: I entered to the running docker container from the docker host with the following command:

Now, I entered as root, and issued the following command:

Then, from the docker host, I restarted my running docker container with the following command:

After that, I started the jenkins job and it finished with success.

I only used the root user to issue the usermod command for the user jenkins.

I`m using the official jenkins docker image (https://hub.docker.com/r/jenkins/jenkins) but I think this solution is applicable to most use cases where we want to run Docker inside a Docker container.

The recommended way for using Docker inside a Docker container, is to use the Docker deamon of the host system. Good article regarding that: https://itnext.io/docker-in-docker-521958d34efd.

The secret to handle the permission issue, which this question is about, is to add permissions for the user of the container inside the container, not the host system. Only root user has permissions to do that by default, so

will do it. Remember to restart the container.

I guess the simpliest way to achive this is to create a customised Dockerfile:

In my case this will work successfully. navigate your local repo and enter this command.

We have two methods for solve this issue..

I fixed this issue using the following commands:

I am running Jenkins inside a docker container. The simplest solution for me was to make a custom image that dynamically sets the GID, like:

Alternatively you could launch jenkins with the following options:

If you're running Jenkins inside a docker container and your Jenkins is linking to the host docker then you can fix that just by the Dockerfile below:

Several times I tried to execute the command

but unfortunately, I have to do this every time when I'm logging in to ubuntu system. It doesn't require a restart and is more secure than usermod or chown. user ID is required when the user name only exists inside the container, but not on the host.

I hope that it will help you solve the problem.

check if ur docker is running sudo systemctl status docker

To check the error docker ps -a

check again if it gives error docker ps -a

I was getting problem that after restarting the ubuntu server docker was loosing the access if I have given the permission via sudo chmod 666 /var/run/docker.sock

Hence I needed to add my username (ubuntu) to the docker group via: sudo usermod -aG docker ubuntu

On the server where Jenkins is running, I used

And then run each docker container with

Using setfacl seems a better option, and no "-u user" is needed. The containers then run as the same user that is running Jenkins. But I would appreciate any feedback from the security experts.

EslamspotEslamspot
7955 bronze badges
Add a comment  |
1
2 Next
Highly active question. Earn 10 reputation (not counting the association bonus) in order to answer this question. The reputation requirement helps protect this question from spam and non-answer activity.