I didn't found it in documentation, I just dumped form variable and found the fields on that path. This actually works well with all forms except when the form itself has a parameter called children. I don't know if it's a bug because if you just dump form object the structure is the same in both cases: 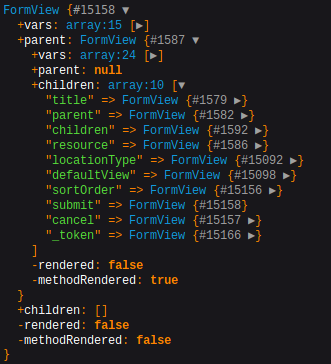 But if you try to access form.parent.children when it has a children parameter inside you won't get that array rather directly the result of "children": 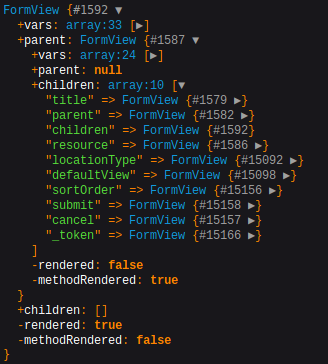 Is it a bug or am I missing something? Maybe there's another way to achieve what I want?

Yes, it's a name collision related to the way Twig accesses each attribute for convenience and because FormView is declared as \ArrayAccess it has priority over object's properties. By the way, the same would happen with parent and vars properties, but let's focus on the solution now rather than on the problem.

As it is a Twig's issue the solution should be targeted on this direction. A workaround could be create a custom function that obtains the property of the FormView correctly:

So, when using this function you can access to the view's properties rather than form's fields (if there is a name collision):

Then, it will iterate over all field elements (children) of the parent view. However, I'd prefer be explicit by creating three functions formview_parent, formview_children and formview_vars instead and don't pass the second parameter.

Not the answer you're looking for? Browse other questions tagged php forms symfony twig or ask your own question.

2980
How do you disable browser autocomplete on web form field / input tags?
1643
JavaScript post request like a form submit
2093
When to use self over $this?
853
Prevent users from submitting a form by hitting Enter
1022
jQuery AJAX submit form
429
Clear form fields with jQuery
490
How to concatenate strings in twig
2
Dynamically rename twig variable
4
Custom form field template with twig
0
Accessing symfony form collection prototype attributes/properties inside twig block