Get a list of all git commits, including the 'lost' ones

Let's say that I have a graph like this:

But if the graph is

I will not see E and F. Can I get git to tell me all the commits, including those on branches which are not named?

which lists all git commits by pretending that all objects mentioned by reflogs (git reflog) are listed on the command line as <commit>.

Not particularly easily- if you've lost the pointer to the tip of a branch, it's rather like finding a needle in a haystack. You can find all the commits that don't appear to be referenced any more- git fsck --unreachable will do this for you- but that will include commits that you threw away after a git commit --amend, old commits on branches that you rebased etc etc. So seeing all these commits at once is quite likely far too much information to wade through.

So the flippant answer is, don't lose track of things you're interested in. More seriously, the reflogs will hold references to all the commits you've used for the last 60 days or so by default. More importantly, they will give some context about what those commits are.

When I tackle this issue I use the following command:

This lets me visualise recent commits which have become headless.

I have this wrapped up in a script helper called ~/bin/git-reflog-gitk.

Edit: - my git-reflog-gitk wrapper is redundant - as you can now call gitk --reflog directly

What saved my life was the following command:

There you find a screen with history commits done to git like this one: 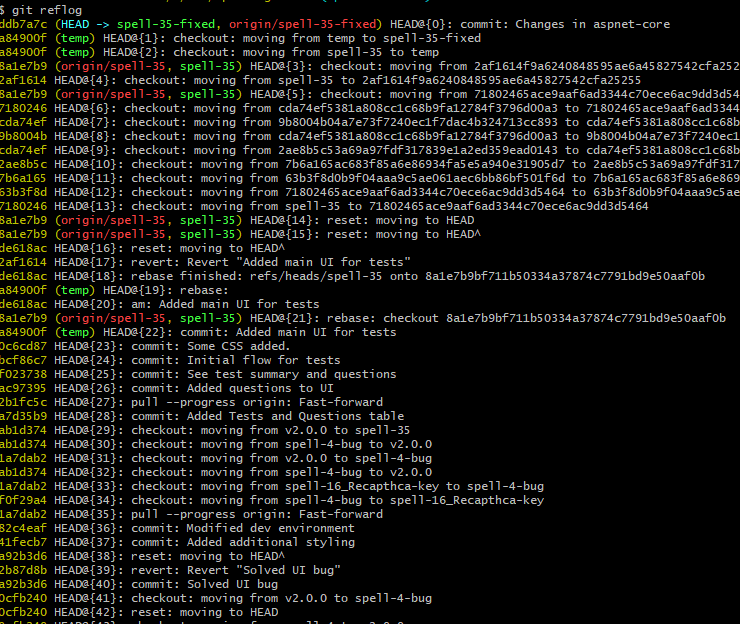 At this point, you only have to find the HEAD@{X} that you need, create a temporary branch and move to it like this:

That way you will have a temporary branch with your lost commit without rebasing or breaking even more your git repository.

saved me! I lost mine while merging HEAD and could not find my lates commit! Not showing in source tree but git log --reflog show all my local commits before

How I solve this problem? Use git fsck and logging!

First create a file containing lost (unreachable) commits and blobs. (NOTE: if you did something like git gc then it will garbage collect all of they commits and you won't find them here!)

You can then open this file with you favorite text editor to copy the commit/blog hashes from there. (*cough* vim macros works great for this *cough*)

Now you can log back from this commit with something like git log --oneline <commit hash>. Alternatively, gitk, tig, or any other git viewer should work.

In your case if you find the hash for commit F the log will show you something like this,

Quick and easy! Now you can find the context behind all of those dangling commits.

P.S. Yes, I know, late post, but oh well, somebody might find it here and find it useful. (Mostly likely me in 6 months when I google this again)

I've had luck recovering the commit by looking at the reflog, which was located at .git/logs/HEAD

I then had to scoll down to the end of the file, and I found the commit I just lost.

We'll git log sometimes is not good to get all commits detail, so to view this...

For Mac: Get into you git project and type:

to view you all commits in that, or:

to view you all commits in that,

then you can edit in any of your favourite browser.

Actually git fsck can be used to find all the lost commits, you just need the right option:

--unreachable alone is not enough because some commits might still be referenced by the reflog. If you need a pretty clear view of the entire commit history, you can create an alias for something like this:

To be honest I am not sure if in this last command you need the --unreachable option, given that git log traverse the ancestors by default (unless --no-walk is specified). I would not bet on it, but I think it is not necessary.

Then create a branch for each one:

Now many tools will show you a graphical visualization of those lost commits.

If you use Git Extensions GUI it can show you a graphical visualization of dangling commits if you check "View -> Show reflog references". This will show dangling commits in the tree, just like all other referenced ones. This way it is way easier to find what you are looking for.

See this image for demonstration. Commits C2, C3, C4, and C5 on the image are dangling but still visible.

0
Why ALL my commit are missing using github?
1
Show git commits without branch reference in graph
69
Show all stashes in git log
10
git fsck: how --dangling vs. --unreachable vs. --lost-found differ?
3
How to find commit in all branches based on part of id
3
git fsck combining --lost-found and --unreachable
0
git reset --hard recover
0
Find git "branch" with no branch name/label having a commit hash on that branch
-1
Files lost due to GIT

7888
How do I remove local (untracked) files from the current Git working tree?
4059
Undoing a git rebase
3681
View the change history of a file using Git versioning
13521
What is the difference between 'git pull' and 'git fetch'?
2308
Showing which files have changed between two revisions
25334
How do I undo the most recent local commits in Git?
6236
Move the most recent commit(s) to a new branch with Git
2166
Throw away local commits in Git
1873
How can I get a list of Git branches, ordered by most recent commit?
2567
How do I safely merge a Git branch into master?