What does the suspend function mean in a Kotlin Coroutine?

I'm reading Kotlin Coroutine and know that it is based on suspend function. But what does suspend mean?

Coroutine or function gets suspended?

Basically, coroutines are computations that can be suspended without blocking a thread

I heard people often say "suspend function". But I think it is the coroutine who gets suspended because it is waiting for the function to finished? "suspend" usually means "cease operation", in this case the coroutine is idle.

Should we say the coroutine is suspended ?

Which coroutine gets suspended?

To continue the analogy, await() can be a suspending function (hence also callable from within an async {} block) that suspends a coroutine until some computation is done and returns its result:

We see await is called on computation, so it might be async that returns Deferred, which means it can start another coroutine

The quote say that suspends a coroutine. Does it mean suspend the outer async coroutine, or suspend the inner computation coroutine?

The reason I mention the thread is because of https://kotlinlang.org/docs/tutorials/coroutines-basic-jvm.html

Suspending functions are at the center of everything coroutines. A suspending function is simply a function that can be paused and resumed at a later time. They can execute a long running operation and wait for it to complete without blocking.

Continuation<T> is an interface that contains two functions that are invoked to resume the coroutine with a return value or with an exception if an error had occurred while the function was suspended.

But what does suspend mean?

Functions marked with the suspend keyword are transformed at compile time to be made asynchronous under the hood (in bytecode), even though they appear synchronous in the source code.

The best source to understand this transformation IMO is the talk "Deep Dive into Coroutines" by Roman Elizarov.

For example, the following function:

Is turned into the following (expressed in Java instead of actual JVM bytecode for simplicity):

This includes the following changes to the function:

This is a very quick way to describe it, but you can see it happen with more details and with examples in the talk. This whole transformation is basically how the "suspend/resume" mechanism is implemented under the hood.

Coroutine or function gets suspended?

At a high level, we say that calling a suspending function suspends the coroutine, meaning the current thread can start executing another coroutine. So, the coroutine is said to be suspended rather than the function.

In fact, call sites of suspending functions are called "suspension points" for this reason.

Which coroutine gets suspended?

Let's look at your code and break down what happens (the numbering follows the execution timeline):

The way this is actually achieved is by turning every suspending function into a state machine, where each "state" corresponds to a suspension point inside this suspend function. Under the hood, the function can be called multiple times, with the information about which suspension point it should start executing from (you should really watch the video I linked for more info about that).

To understand what exactly it means to suspend a coroutine, I suggest you go through this code:

The code inside the launch block starts executing right away on the current thread, as a part of the launch call. What happens is as follows:

Note that, at this point, you have the same effect as if the code inside the launch block and your fun main code are executing concurrently. It just happens that all this is happening on a single native thread so the launch block is "suspended".

Now, inside the forEach looping code, the program reads the continuation that the b() function wrote and resumes it with the value of 10. resume() is implemented in such a way that it will be as if the suspendCoroutine call returned with the value you passed in. So you suddenly find yourself in the middle of executing b(). The value you passed to resume() gets assigned to i and checked against 0. If it's not zero, the while (true) loop goes on inside b(), again reaching suspendCoroutine, at which point your resume() call returns, and now you go through another looping step in forEach(). This goes on until finally you resume with 0, then the println statement runs and the program completes.

The above analysis should give you the important intuition that "suspending a coroutine" means returning the control back to the innermost launch invocation (or, more generally, coroutine builder). If a coroutine suspends again after resuming, the resume() call ends and control returns to the caller of resume().

As many good answers are already there, I would like to post a simpler example for others.

async and await use case :

I've found that the best way to understand suspend is to make an analogy between this keyword and coroutineContext property.

Kotlin functions can be declared as local or global. Local functions magically have access to this keyword while global don't.

Kotlin functions can be declared as suspend or blocking. suspend functions magically have access to coroutineContext property while blocking functions don't.

The thing is: coroutineContext property is declared like a "normal" property in Kotlin stdlib but this declaration is just a stub for documentation/navigation purposes. In fact coroutineContext is builtin intrinsic property that means under the hood compiler magic aware of this property like it aware of language keywords.

What this keyword does for local functions is what coroutineContext property does for suspend functions: it gives access to current context of execution.

So, you need suspend to get an access to coroutineContext property - the instance of currently executed coroutine context

I wanted to give you a simple example of the concept of continuation. This is what a suspend function does, it can freeze/suspend and then it continues/resumes. Stop thinking of coroutine in terms of threads and Semaphore. Think of it in terms of continuation and even callback hooks.

To be clear, a coroutine can be paused by using a suspend function. lets investigate this:

In android we could do this for example :

Above code prints the following : 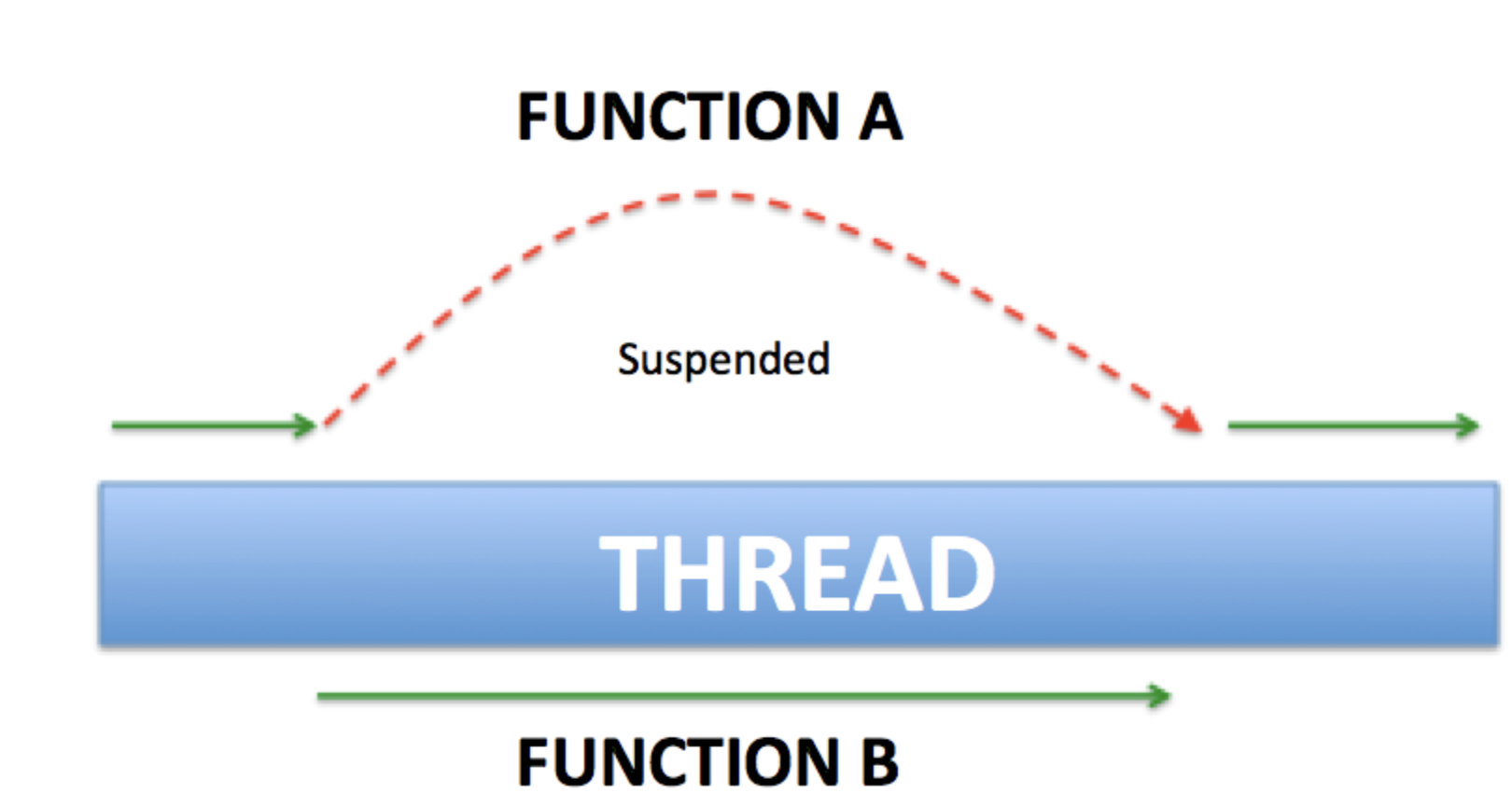 So the current function you launched from does not stop, just a coroutine would suspend while it continues. The thread is not paused by running a suspend function.

I think this site can help you straight things out and is my reference.

Let's do something cool and freeze our suspend function in the middle of an iteration. We will resume it later in onResume

Now, let's return to our suspended function and make it freeze in middle of iteration :

And the loop will continue. Its pretty neat to know we can freeze a suspend function at any point and resume it after some time has beeb passed. You can also look into channels

There are a lot of great answers here, but I think there are two additional things that are important to note.

launch / withContext / runBlocking and a lot of other things in the examples are from the coroutines library. which actually have nothing to do with suspend. you don't need the coroutines library to use coroutines. Coroutines are a compiler "trick". Yes, the library sure makes things easier, but the compiler is doing the magic of suspending & resuming things.

The second thing, is the compiler is just taking code that looks procedural and turning it into callbacks under the hood.

Take the following minimal coroutine that suspends that does not use the coroutine library :

Effectively the compiler took what looks like procedural code and turned it into callbacks.

It also tells the compiler that this is the "beginning" of state and to prepare to split up the following code into callbacks. The startCoroutine only exists on suspend lambda.

The actual Java code generated by the Kotlin compiler is here. It's a switch statement instead of callbacks, but it's effectively the same thing. Called first w/ case 0, then w/ case 1 after the resume.

Let's say we have a function named myFunction.

Usually these code blocks execute like block1, block2, block3, block4 . So code block 3 and 4 might execute while code block 2 is still running. Because of that reason there can be problems. (screen might freeze, app might crash)

But if we make this function suspend

Now, this function can get paused when code block 2(long running operation) starts executing and get resumed when it is done. Code block 3 and 4 will execute after that. So there will be no unexpected thread sharing issues.

17
What is suspendCoroutine?
9
How can CoroutineScope(job+Dispatchers.Main) run on the main/UI thread?
19
Room without LiveData
8
How to make sense of Kotlin coroutines?
9
Who is responsible for suspension and continuation of coroutines?
4
How does a Coroutine Continuation internally work?
4
Do suspend functions execute in another thread and come back with the result?
5
Confused about Kotlin's suspending functions in relation to coroutines
2
Thread safety of Kotlin's SequenceBuilder
2
Does the suspend keyword in Kotlin do anything without coroutines?
See more linked questions