I want to test some URLs in a web application I'm working on. For that I would like to manually create HTTP POST requests (meaning I can add whatever parameters I like).

Is there any functionality in Chrome and/or Firefox that I'm missing?

I have been making a Chrome app called Postman for this type of stuff. All the other extensions seemed a bit dated so made my own. It also has a bunch of other features which have been helpful for documenting our own API here.

CURL is awesome to do what you want! It's a simple, but effective, command line tool.

Open Network panel in Developer Tools by pressing Ctrl+Shift+E or by going Menubar -> Tools -> Web Developer -> Network. Then Click on small door icon on top-right (in expanded form in the screenshot, you'll find it just left of the highlighted Headers), second row (if you don't see it then reload the page) -> Edit and resend whatever request you want 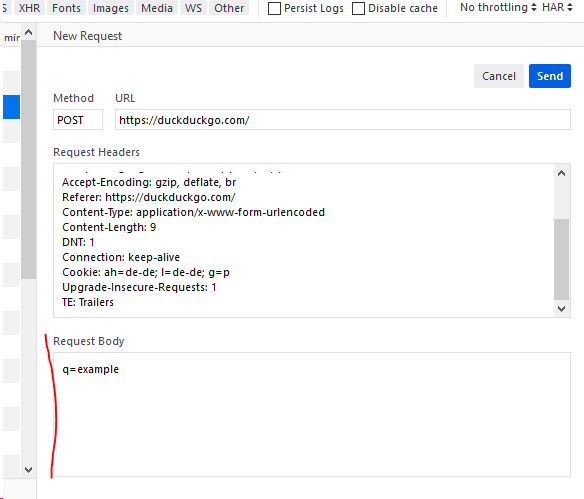 Forget the browser and try CLI. HTTPie is a great tool! 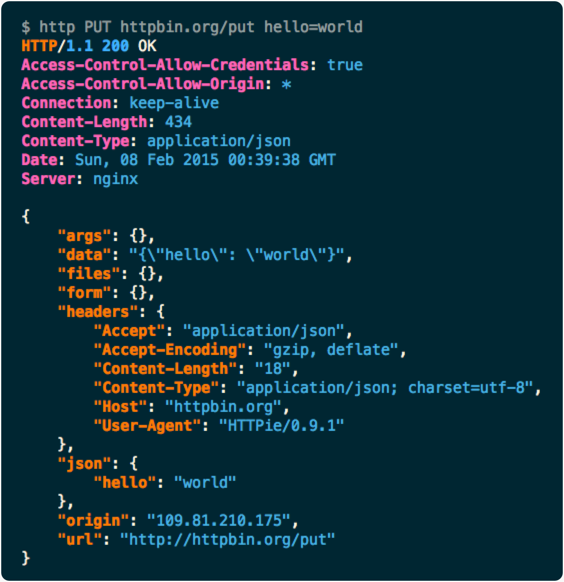 If you insist on a browser extension then:

Having been greatly inspired by Postman for Chrome, I decided to write something similar for Firefox.

REST Easy* is a restartless Firefox add-on that aims to provide as much control as possible over requests. The add-on is still in an experimental state (it hasn't even been reviewed by Mozilla yet) but development is progressing nicely.

The project is open source, so if anyone feels compelled to help with development, that would be awesome: https://github.com/nathan-osman/Rest-Easy

* the add-on available from http://addons.mozilla.org will always be slightly behind the code available on GitHub

You specifically asked for "extension or functionality in Chrome and/or Firefox", which the answers you have already received provide, but I do like the simplicity of oezi's answer to the closed question "How can I send a POST request with a web browser?" for simple parameters. oezi says:

I.e., build yourself a very simple page to test the POST actions.

It works great for me -- do remember that you can still use the debugger with it. The Network pane is particularly useful; it'll give you rendered JSON objects and error pages.

For Firefox there is also an extension called RESTClient which is quite nice:

It may not be directly related to browsers, but Fiddler is another good software. 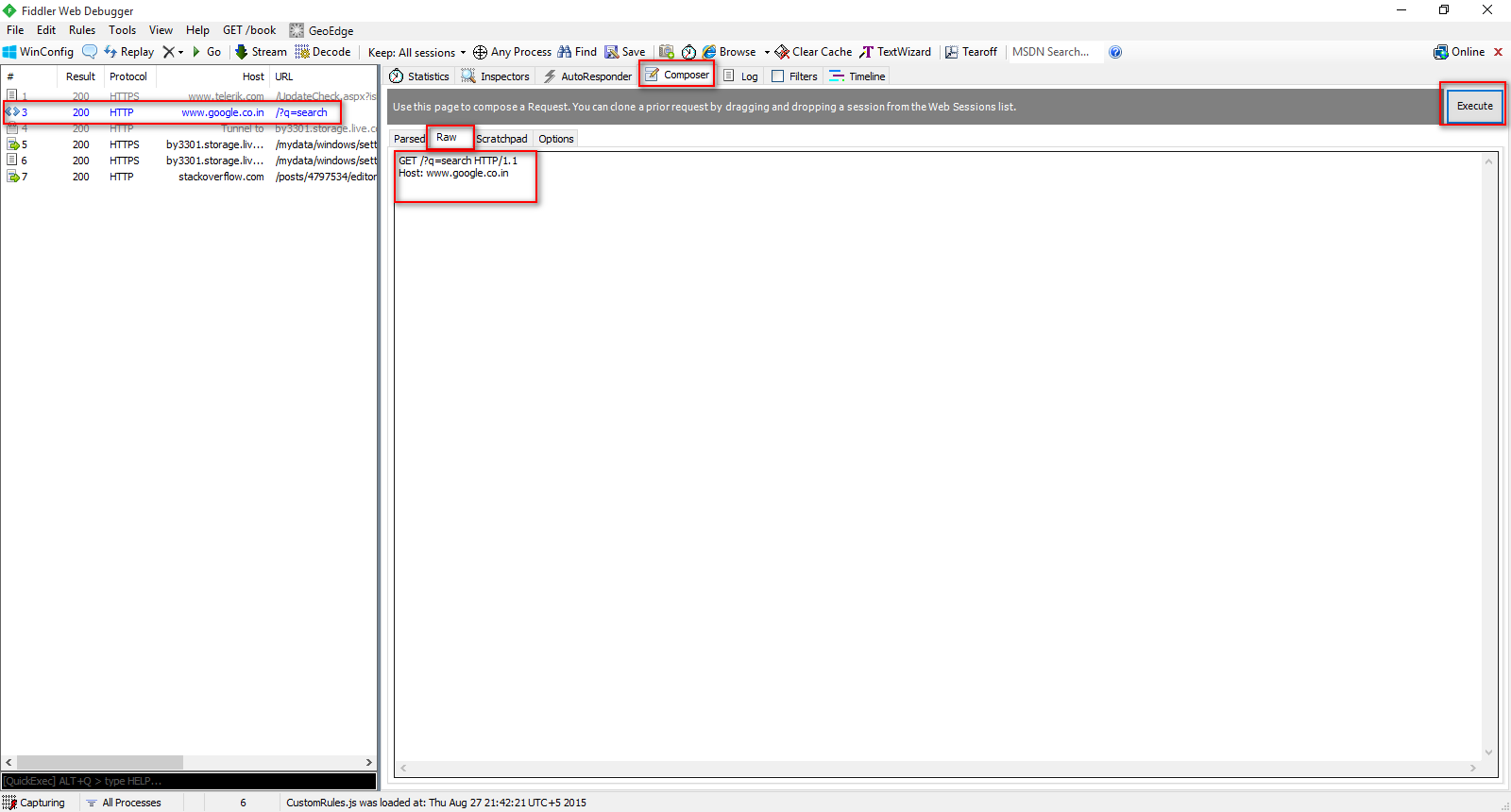 I think that Benny Neugebauer's comment on the OP question about the Fetch API should be presented here as an answer since the OP was looking for a functionality in Chrome to manually create HTTP POST requests and that is exactly what the fetch command does.

There is a nice simple example of the Fetch API here:

Some of the advantages of the fetch command are really precious: It's simple, short, fast, available and even as a console command it stored on your chrome console and can be used later.

The simplicity of pressing F12, write the command in the console tab (or press the up key if you used it before) then press Enter, see it pending and returning the response is what making it really useful for simple POST requests tests.

Of course, the main disadvantage here is that, unlike Postman, this won't pass the cross-origin-policy, but still I find it very useful for testing in local environment or other environments where I can enable CORS manually.

You could also use Watir or WatiN to automate browsers. Watir is written for Ruby and Watin is for .NET languages. I am not sure if it's what you are looking for, though.

Try Runscope. A free tool sampling their service is provided at https://www.hurl.it/.

COI disclosure: I have no relationship to Runscope.

Check out http-tool for Firefox...

Aimed at web developers who need to debug HTTP requests and responses. Can be extremely useful while developing REST based API.

There have been some other clients born since the rise of Postman that is worth mentioning here:

You can post requests directly from the browser with ReqBin. No plugin or desktop application is required.

Not the answer you're looking for? Browse other questions tagged ajax google-chrome firefox browser http-post or ask your own question.

42
How can I send a POST request with a web browser?
20
How to simulate HTTP POST on localhost (*Windows* not Unix)?
22
How do I POST an XML string to a webservice for testing?
19
How to make http/https POST requests manually?
4
Method Not Allowed (GET): / in django
3
How do I send 'fake' POST header to a page?
4
POST data via CustomTab or Chrome
4
How to execute a PHP email script using AJAX? [Current code is not working]
2
How to send rest API (Google Vision's API) request with python?
1
Inno Setup open link with an HTTP POST request
See more linked questions

625
Are the PUT, DELETE, HEAD, etc methods available in most web browsers?
407
What requests do browsers' "F5" and "Ctrl + F5" refreshes generate?
173
How to remove the arrow from a select element in Firefox
714
Using Chrome's Element Inspector in Print Preview Mode?
560
What is a user agent stylesheet?
225
How can I debug a HTTP POST in Chrome?
619
Disabling Chrome Autofill
907
Remove blue border from css custom-styled button in Chrome
476
Can a website detect when you are using Selenium with chromedriver?